The Akshaya Patra Foundation is serving meals to vulnerable people in India and the UK during Covid-19. The CEOs spoke to DESIblitz about their work.

"we strived to maintain the highest standards of safety"

The Coronavirus pandemic has had a massive effect on India’s poor, leaving them struggling for food. But The Akshaya Patra Foundation has been serving meals to all those who have been affected.

The Akshaya Patra Foundation (TAPF) is a not-for-profit organisation headquartered in Bengaluru, India. It strives to address issues like hunger and malnutrition in the country.

As of June 10, TAPF has served over 32 million freshly cooked meals and over 680,000 food relief kits with essential groceries, amounting to over 28 million meal servings. This totalled over 60 million meals served.

Using state-of-the-art kitchens across India, freshly cooked meals have been prepared and served with the help of volunteers.

At the same time, food relief kits based on the local palate of the region have been distributed to vulnerable communities throughout India.

Food relief by the foundation has also been prevalent in the UK. The Akshaya Patra Foundation UK has provided over 100,000 vegan meals to vulnerable citizens.

Freshly cooked khichdi has been prepared daily in two kitchens in Holborn and Watford, with the help of hundreds of volunteers.

At no cost, the food has been distributed from different points in London seven days a week.

The generous acts would not have been possible if it were not for Shridhar Venkat and Bhawani Singh Shekhawat. 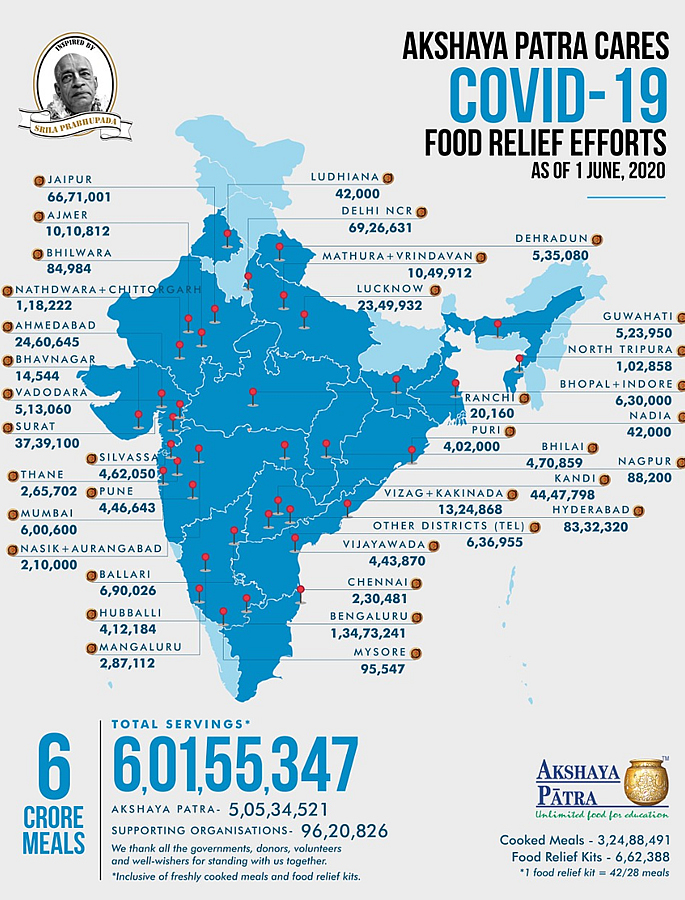 Both spoke to DESIblitz about the problems faced as a result of Covid-19 as well as the support they have received to help feed the vulnerable.

What have been the biggest Covid-19 challenges for TAPF? 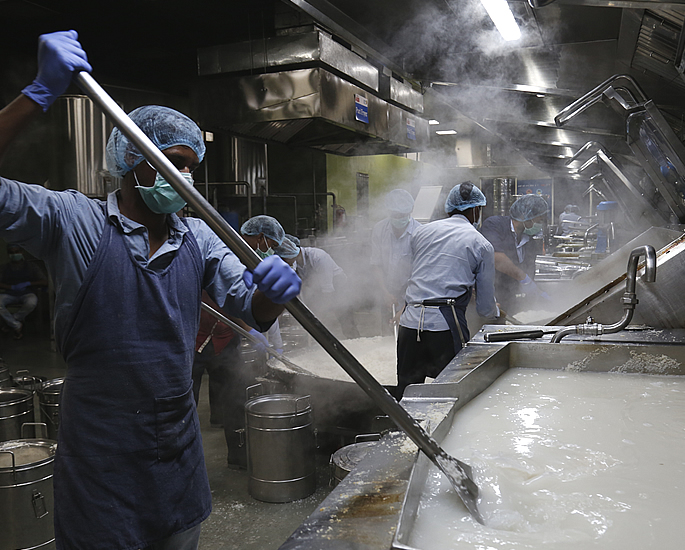 Undoubtedly, Covid-19 presented unprecedented challenges for the foundation in both the UK and India.

Mr Venkat explained the challenges in India: “Undertaking relief feeding on such a large scale during the lockdown had its fair share of challenges.

“One of the biggest challenges was food safety and the safety of our staff and volunteers considering that we were operating during a pandemic.

“Taking into account the urgency and criticality of the endeavour, we strived to maintain the highest standards of safety and hygiene in all our processes.

“With containment measures such as the lockdown and subsequent movement restrictions in place, supply chains were affected.

“The necessary permits from concerned authorities for the movement of delivery vehicles and our cordial relations with the suppliers ensured that the impact of these restrictions on our operations was minimal.

“Furthermore, corporates provided financial as well as logistical support and even helped meet the manpower requirements by urging their employees to volunteer.

“Manpower requirements were also fulfilled by individuals who selflessly came forward to participate and help in undertaking these relief efforts.”

Mr Shekhawat revealed the effect it had on the foundation in the UK.

“The Akshaya Patra Foundation has systems and processes designed to serve a large number of meals in a planned and organised manner.

“However, with Covid we were faced with unprecedented challenges on logistics, supply chain and distribution.

“We were required to serve a large number of people and families with very limited funds initially.”

He went on to say that they had to create things from scratch.

“Also, we needed to almost immediately create a new distribution model, a new menu, as well as create a service that allowed people to receive food and ingredients they could cook with.

“All this meant creating a new model of sourcing ingredients, packing them and distributing them to those who needed it most.

“We were able to do this with fantastic support from the local and government authorities but even more so with the support of our volunteer arm AIKYA (Akshaya Patra Youth Association). A lot of our volunteers came from the schools we serve and the alumni who have benefited from our program over the years.”

How easy was it in India to get support from Indian authorities? 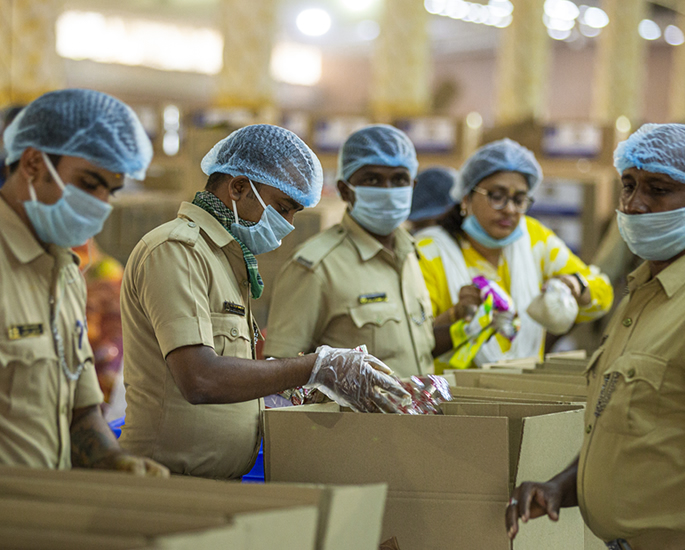 Both CEOs stated that the Indian authorities were keen to help. As a result, they were able to help a lot of people.

Mr Venkat revealed the long collaboration between The Akshaya Patra Foundation and the Government of India, State Governments and Union Territory Administrations.

He said: “Therefore, it was easier to collaborate with them for this food assistance endeavour.

“In essence, our initiative was aimed at aiding the Government’s relief efforts to help the vulnerable populations.

“Timely permissions and authorisations from various Government agencies ensured that the challenges were minimal despite containment measures.”

“All arms of the government and semi-government organisations were very keen to help.”

“It took some time to mobilise all resources but we received notable support from the local, regional and central authorities in addition to the police and other ancillary volunteer networks.

“Only because of this collective mobilisation and collaborative work were we able to get to scale very quickly and continue to serve large numbers.”

What kind of people have you supported in the UK? 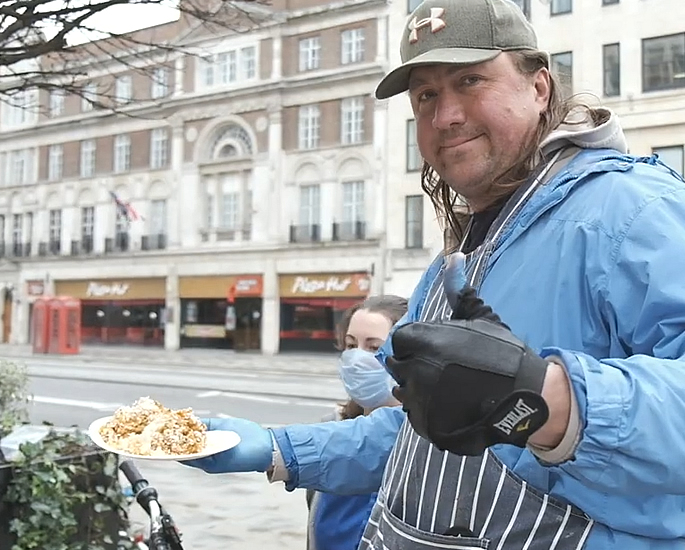 Mr Shekhawat explained that the majority of the UK-based work has happened in London. He said:

“In the UK, almost all of our work has been limited to London where we have supported the homeless, rough sleepers and those who were finding it difficult to procure food for themselves.

“We have also supported the elderly who were self-isolating and with the help of a range of community organisations displaced students too.”

Who are the real champions of your operations? 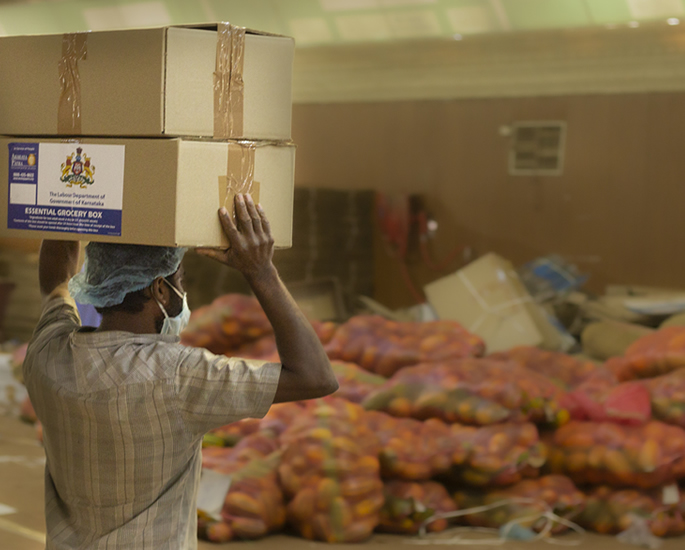 The CEOs of The Akshaya Patra Foundation have led operations in India and the UK but both Mr Venkat and Mr Shekhawat agreed that the volunteers are the “real champions” as they helped make everything possible.

Mr Venkat said: “Over a period of three months, we cumulatively served over 60 million meals to people from vulnerable communities in 52 locations across 17 states and 2 union territories.

“The real champions of this endeavour were the staff and volunteers who helped make this possible. They selflessly came forward in these difficult times and worked on the frontline to help people in need. We are eternally grateful to them for their support.”

Mr Shekhawat added: “The real champion of our program are our donors and volunteers! They have given us their time and resources when we desperately needed them.

“Our volunteers have come forward to help us in myriad ways be it sourcing food, produce, distribution, packaging, cooking or even sending our communications and raising vital funds.

“Without our donors and volunteers, we wouldn’t have been able to serve as effectively.

“Our champions range from a 6-year-old boy who urged his parents and friends to do more, to a 90-year-old pensioner who walks to the nearest post office to post a cheque every single week and reminds us to not send him a thank you!”

How do you intend to follow-up your relief in the future? 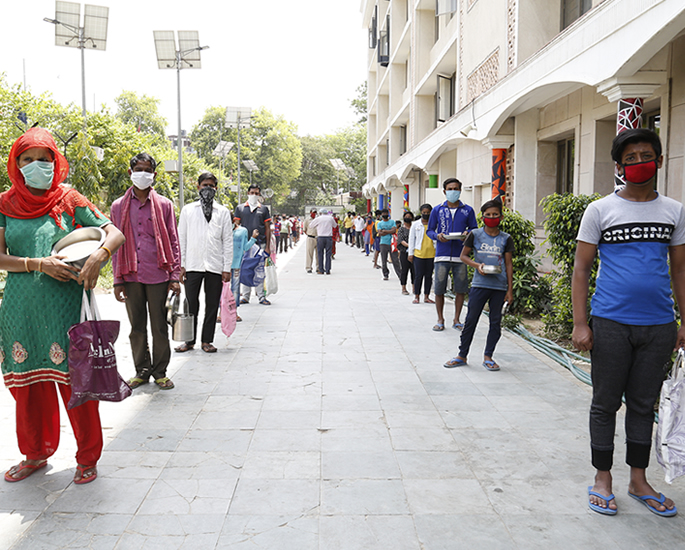 Both CEOs of The Akshaya Patra Foundation identified that they will have to come up with solutions for the future.

Mr Venkat pointed out that India’s situation is expected to worsen, therefore, The Akshaya Patra Foundation India will come up with solutions to help those affected by food insecurity.

He said: “Covid-19 pandemic has compounded food security issues across the world, doubling the number of people suffering from acute hunger.

“The situation is expected to worsen in the near future due to the socioeconomic problems resulting from the pandemic.

“With the number of people affected by food insecurity expected to rise in the post-Covid world, the Government’s nutrition welfare endeavours, the MDM Programme, in particular, will play a crucial role in contributing to our development as a nation.

“We will continue to come up with innovative solutions to supplement these welfare programmes contributing to the health and well-being of children and communities.”

Mr Shekhawat stated the commitment to serving meals in the UK.

“We are documenting all our learnings during this crisis both in India and in the UK to ensure that we have a live learning deck.

“In addition, we are building capabilities in the UK to serve more and creating deeper networks in India whereby we are looking at addressing a wider and composite range of solutions.

“We are committed to serving nutritious meals that are created using our fantastic triangulation of faith, science and systems. We believe that in order to serve with speed and scale, we must continue to think like a corporate company would, but serve with the heart of a charity.

“We must and will continue our relief program in India and the UK for as long as it takes.”

TAPF has helped many people from vulnerable communities such as labourers and daily wage earners across India by providing them with nutritious food.

Chairperson of TAPF, Madhu Pandit Dasa, said: “This has only been possible due to the collaborative efforts of everyone involved.

“I extend my deepest gratitude to various Governments, corporate partners, individual donors, motivated volunteers and all our well-wishers for enabling us to serve people in these difficult times through their sustained support.

“We will continue to extend our services as long as it is possible.’’

The same has been done in the UK and are preparing to serve over 30,000 meals during the coming school holidays under the Holiday Hunger project.

Mr Shekhawat states that the foundation is committed to providing a solution to hunger and improved nutrition “with speed and at scale”.

TAPF in India and in the UK are continuing to help the vulnerable by providing them with food throughout this difficult period and are focused on making sure that they do not go hungry.

Dhiren is a journalism graduate with a passion for gaming, watching films and sports. He also enjoys cooking from time to time. His motto is to “Live life one day at a time.”
Afia Akram talks Wheat & Gluten-Free Samosas and Initiative
10 Popular Gujarati Curries & Dishes You Must Try