Pro-feminist website Homegrown’s co-founder Varun Patra has admitted recording a sex act without the woman’s consent which has led to more accusations.

Varun Patra, co-founder and head of marketing at youth media company Homegrown, has been accused by an anonymous woman of sexual harassment.

The victim made her statements public through an open letter on artist and poet Priyanka Paul’s social media platforms.

The accusations against Patra also attracted the attention of social media after a post by writer Shruti Sunderraman was shared multiple times and spurred several reactions from other media personalities on the platform.

This is in the midst of India’s #MeToo movement which has seen several men in prestigious jobs being accused of sexual harassment.

In her open letter, the victim states that Patra allegedly performed a sex act on her and recorded them having sex, both without her consent.

In the wake of the allegations, Patra has stepped down from his role at Homegrown.

The alleged incident happened on November 11, 2018, when the woman met Patra for dinner before going back to her home and having sex.

“Towards the end of the night, we went to my room and had sex, in the middle of which he felt the need to stick his fingers in my a**. I told him not to do it, and he did it anyway, 3 times. I brushed it off as miscommunication but I shouldn’t have.

“Right after we finished, I saw him stop a recording on his phone… and he admitted to the fact that he had recorded us having sex, without my consent.” 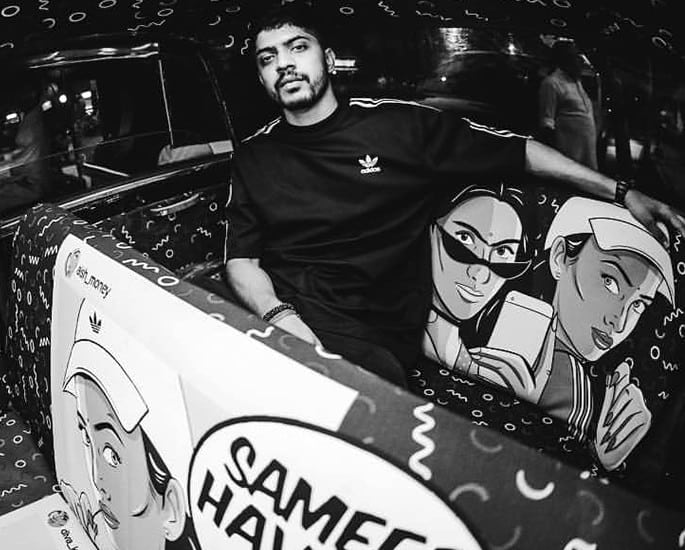 The entrepreneur has stated that it was not the first time he secretly recorded a woman while having sex with them. His reason is to prevent him from being wrongly accused of sexual misconduct in the wake of India’s #MeToo.

He said: “It came from a place of fear and uncertainty of how to navigate sex with somebody who I had not known for very long in the atmosphere of MeToo which I had already been introspecting on a lot.”

Multiple cases of sexual harassment by prominent figures in the entertainment industry against women emerged throughout 2018 with the first significant one being Tanushree Dutta accusing Nana Patekar.

While there has been a long line of accusations, there has not been any convictions or major evidence to support the allegations.

To a certain extent, his reasons can be justified especially if the accusations into the media mogul performing sexual acts without consent are false as they can potentially destroy one’s reputation and career.

Some Twitter users have praised him for his bold actions.

Smart man and I can’t blame him.
Here’s hoping he inspires other men, and women think twice about career and life ruining false accusations.

He has since been called out over his actions, contradicting his public position in the media industry. Journalist Neha Mathews recalled one encounter she had with Patra.

She wrote: “I honestly expected nothing from a man who thinks it’s okay to stuff his face in my hair and stub his cigarette on my friend when he’s drunk.

“Varun Patra, an easy way to ‘protect’ yourself from #MeToo would have been to understand consent.”

I honestly expected nothing from a man who thinks it's okay to stuff his face in my hair and stub his cigarette on my friend when he's drunk. @VarunPatra, an easy way to "protect" yourself from #MeToo would have been to understand consent. https://t.co/bK6KXeA4BN

What makes the allegations against Patra more shocking is that he is the co-founder of Homegrown, one of the most progressive feminist online platforms.

In addition, Patra labels himself as a “progressive feminist”. The platform prides itself on being a place where victims are given a voice yet its co-founder has allegedly contradicted his brand and what he supposedly believes in. 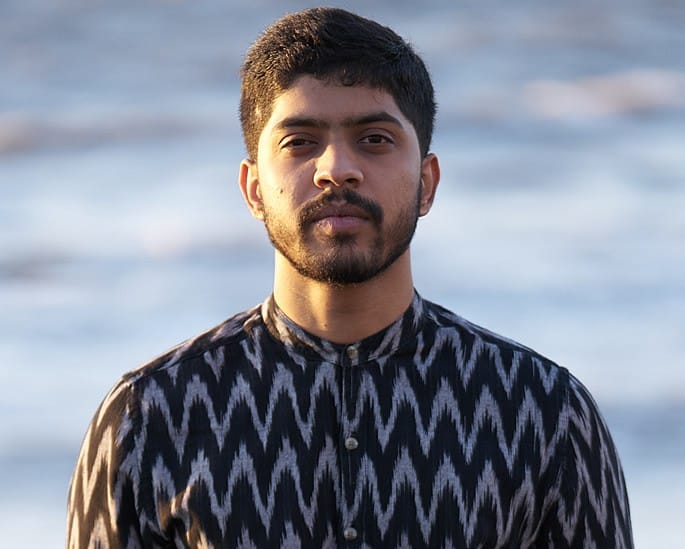 The victim voiced her disappointment in the company and in Varsha Patra, Homegrown’s CEO, co-founder and Varun’s sister.

“What’s even more ironic is what Homegrown stands for and what it meant for me personally.

“Homegrown was a safe space, a space to read about sex positivity and feminism, a place where victims are not slut-shamed, victim blamed or gaslighted, but our voices are amplified.

“And to see Varun being celebrated as a progressive feminist is laughable, to watch his sister, who was well aware of his abusive behavior, champion him on like he is some beacon of hope in India is hilarious.”

According to the open letter, Varsha contacted the victim in an attempt to speak about the matter and prevent it from going public.

“Trying to justify his actions was very un-feminist of you and using your past life experiences/hurdles is no way an excuse for his actions… I don’t believe either of you realize how deeply this has affected me, and possibly other victims who were too scared to come forward.”

Judging by what the victim said, it seems as if Ms Patra tried to make excuses for her brother’s alleged actions and attempted to stop the woman from going public with her story.

However, Ms Patra may also be taking into account the wider society who have been a victim of this type of thing as well as trying to prevent her brother’s name from being tarnished should his alleged misconduct prove to be false.

This article was talked about when Twitter users expressed their anger at Varun Patra. Food writer Ruchi Marshal stated that Patra should call on his own actions instead.

She wrote: “Varun Patra oh wow. Look who’s talking. How about calling out your own imbecile act of recording without permission, your nonconsensual sexual acts with women, for a change?”

The victim was initially hesitant of reporting the incident earlier for fear that she would lose her job or being slut-shamed.

In a statement, Patra firmly denies engaging in sexual activity without consent. He said:

“I only want to clarify that at no point did we engage in sexual activity without protection and without consent.”

He apologised for making the audio recording and in the wake of the allegations has stepped down from his role as head of marketing.

The company released a statement on their Instagram page. 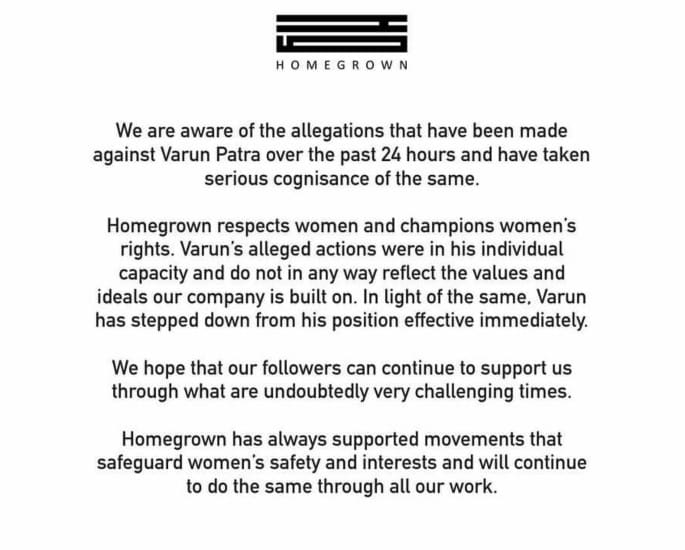 Despite the tough time that the company is going through, they still maintain their values and their interests to support women’s safety remains a priority.

It is unclear whether the woman has contacted police about the incident but the British Council in India, who recently announced a partnership with Homegrown, has stated that they are investigating the allegations.

The allegations into Patra’s sexual misconduct are still fresh and it is possible that more women may come forward.

Varun Patra has admitted to making recordings and gave his reasons for doing so, but his denial of performing a sexual act without permission may see some developments in the future.

This incident is one of many which occur and can be much worse such as the recording being uploaded online.

It is an accusation which is very shocking given the values of the media platform. While it is still early days, further investigations should reveal more details about Varun Patra’s alleged sexual activities.

Dhiren is a journalism graduate with a passion for gaming, watching films and sports. He also enjoys cooking from time to time. His motto is to “Live life one day at a time.”
10 Men accused of Sexual Abuse against Two Girls aged 14
Drug Traffickers jailed for £1m Heroin in Suitcase at Airport