Graphic Designer and Creative Producer, Akshar Pathak has re-defined our perception of Bollywood through his posters. DESIblitz spoke to Akshar Pathak to find out more about his minimalist designs.

"What I did was to instead add a minimalistic twist to these posters."

Akshar Pathak is a 23-year-old graphic designer from New Dehli. He created his pet project Minimal Bollywood in 2012. The project redesigns film posters for the Bollywood in a new and unique way. It has become a phenomenon across the web and social networking platforms like Facebook and Twitter.

Akshar has a tendency to bring out one iconic scene or image to represent each film. He brings a fresh set of eyes to the Bollywood world. The resulting impact is extraordinary.

His minimalist art is both simple yet has the ability to engulf the 100 years of Indian cinema within it. DESIblitz caught up with Akshar to find out more:

You describe yourself as a ‘Creative Producer’, how did you end up down this career path?

“I made the biggest mistake of my life by opting for PCM in the 12th. I flunked all exams for the next two years except English. A friend helped me with physics. I was only a Bodhi tree away from enlightenment.

“I figured since I’m clearly not photogenic I have earned the moral rights to use Photoshop. Plus, I loved to paint and sketch as a child. It was great that I managed to make a career in this field!” 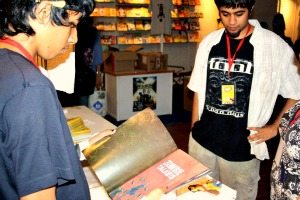 How would you describe your art?

“I’d call it SIMPLE. Maybe I should come up with a better word than simple. I’d call it uncomplicated.”

What is it Minimal Bollywood all about?

“Minimalism is an extension of simplicity. If used as a tool, not only do you manage to extract something from all its complex settings, you also get rid of everything unnecessary that usually comes along.

“All Bollywood posters mostly are action packed with photo-manipulated images. There is a heroine providing some mystique and sensuality along with the hero looking all tough in the poster. What I did was to instead add a minimalistic twist to these posters.

“The procedure begins with stripping the object down to its bare essentials and then a handful of colours, shapes and positive/negative space convey the basic idea around which the movie was originally made. All but the essential.

“Each concept for the posters is really a striking back against the growing complexity of the actual poster. Against the idea that busier is better.” 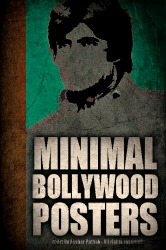 Most of your designs are a tongue-in-cheek perspective of the Bollywood world. Why have you chosen to present Bollywood in such a way?

“The movies I pick for my posters are based on the ideas and suggestions I receive from people and what they’re eager to see next. I take the most significant idea, concept, or memory from the movie at first. Every illustration depicted is a visual relation that I shared and experienced while watching that particular movie.

“Some examples from the posters are, just a simple glass of orange juice and a carom board for Munnabhai MBBS. Or an old rustic telephone for Hera – Pheri. In my viewpoint, a poster needs a clearly defined purpose to eliminate any confusion from the start by having a single, strong focal point. And for the world to see, its fresh, clutter breaking and ahead of its times.

“Minimal Bollywood Posters was not created with the intention of a business venture. Minimalism is an art in itself and when my expression of minimalism collected so many like-minded people who could appreciate the same as well as contribute their work, there was no looking back.

“The posters will continue to be designed with each new suggestion that I can manage to execute with perfection or whatever comes close until I find other genres to espouse it with.”

It is 100 years of Bollywood this year, do you have anything special in store?

“I’m planning to come out with a book of 100 posters. Which will be perforated, so one can tear them out and gift them to people or keep the ones they want to. It’s still a very premature idea though.” 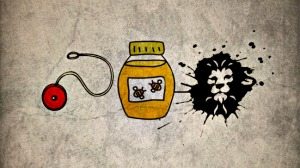 Describe yourself in 3 words.

Who are your biggest artistic inspirations?

“Banksy – Bansky is my favourite artist because he has a very sharp eye for how rampant merchandising have turned capitalism into a sick joke on itself. But instead of getting cynical and bitter, he makes people laugh at it, while thinking about it at the same time. Moreover, he makes those people understand who, who won’t get it otherwise.

“I really like Graffiti as an art form. The Government, community have free art knocking at their door and they put it down for a crime. They are not getting any pat on the back or getting paid to do it, it’s a free art form and it should be respected. And Banksy says it better with images what some people can’t even convey with words. His art is something to stop at, look at and think about twice.”

Are there any new projects you are working on right now?

“I’d currently working on this project called TWEETARD, where I take my own tweets, as well as tweets from other and make posters out of them.”

Askhar has a great eye for de-constructing ideas and concepts and converting them into minimalist art. It is lucky then that India’s huge Bollywood industry provides such a perfect backdrop: “People love movies in India,” Akshar adds.

Minimal Bollywood has grown in popularity since it was introduced in 2012. At such a young age, this is definitely only the beginning of the great things to come from Akshar Pathak. We will definitely be keeping an eye on him.

Aisha an English literature graduate, is a keen editorial writer. She adores reading, theatre, and anything arts related. She is a creative soul and is always reinventing herself. Her motto is: “Life is too short, so eat dessert first!”
India’s Pranava Prakash talks Bollywood and Art
Popular Cities to visit in Pakistan