Yen will be unveiling his collection for the ‘House of iKons’ a Lady K Production as the Grand Finale.

Emirates Palace in Abu Dhabi saw Yen Designs take to the stage with an immaculate collection of the finest haute couture wear in the East. The collection showcase was led by Brand Ambassador of Yen, Lady K and saw DESIblitz as official media partner for the show.

The collection ‘Ode to Melancholy’ was exhibited only to high profiled dignitaries throughout the UAE and Yen will be releasing the collection to the general public later in 2014.

Notably Yen draws much inspiration from both his experiences and his surroundings and transforms them into stunningly delicate one-off pieces. 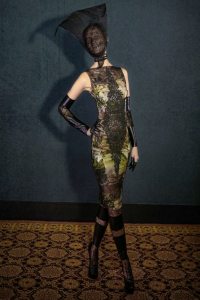 Each dress is a piece of artwork in itself and you cannot but get lost within the depth of layered material, embroidery and lace.

The beautiful dark collection was inspired by his ‘sadness and dark side’. The detail on the couture was of recyclable materials, rubber and plastic. The delicate intricacy of the artwork is refined and detailed, that one would think this was printed upon the fabric itself.

‘Going Green’ has become a big thing worldwide and in UAE, hence the recyclable material used for this collection. Yen stated: “Since last year it has been a whirlwind, from UAE, London then to USA in less than five months.”

Using a dark palette as his base, Yen uses nature as his guide with natural browns, olive greens and black giving almost a camouflage effect.

It is incredible to see how YEN has managed to take recyclable and waste items to create such elegant and sophisticated pieces – and it is evident that this talented designer is able to take any material and create a masterpiece. 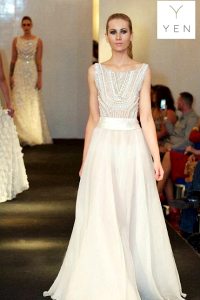 While hailing from Abu Dhabi Yen Designs has become global brand after his first collection was exhibited for the first time internationally during London Fashion Week (LFW) 2013 under Lady K Production, which also saw DESIblitz as official media partner. Yen is the first Abu Dhabi designer ‘historically’ to showcase at London Fashion Week.

Here he took his ‘white’ collection of bridal, couture and chic dresses. The beautiful white and ivory collection left the London crowd spellbound and all were curious to know who this amazing designer was.

Following LFW Yen also wowed America by showcasing at the Metropolitan Fashion Week October 2013 and will be the grand finale this at LA Fashion Week 2014.

This Eastern designer has created quite a stir in the West; and he has been flagged by the likes of Paris Hilton and other A-List Hollywood celebrities who have all been requesting Yen Couture. 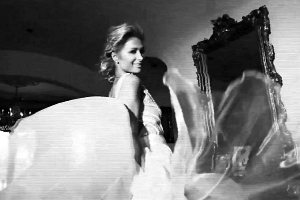 When asked about Paris Hilton, Yen said that his stylist who also looks after other major A-List Hollywood celebrities fell in love with his pieces displayed in Melrose Avenue, Hollywood California.

Soon after he received the news that Paris wore one of his couture dresses in her new music video. Yen is still in awe of the global success in such a short span of time.

Yen started designing from 2009, inspired by Anime, DC and Marvel illustrations plus the colour and texture of nature. Nurturing his creative talent, he decided to leave his medical profession and focus on couture designing that same year.

For London Fashion Week, September 2014, Yen will be unveiling his collection for the ‘House of iKons’, a Lady K Production, as the Grand Finale. Yen admitted that to be invited a second year in row is fantastic news, showing the full confidence of the whole production company for his brand.

Yen’s collection will be something very different from his previous ones as he is trying to tap into the purest form of his aesthetics. He calls it ‘The Aria to Yvonne’, a song for his mother, from whom he drew all his artistic influence.

Yen Designs truly encapsulates chic, elegance and regal beauty in all his pieces. Following the success of all his collections so far, the world will be waiting with baited breath for this amazing designer who has created a fashion storm with his unique vision of couture genius.