Pakistani celebrity, Veena Malik looks happy and in love as she poses in a new photoshoot with her husband Asad Bashir Khan. Take a look at the amazing pictures here.

The stunning Pakistani couple, Veena Malik and her husband Asad Bashir Khan have released pictures from their latest photoshoot on social media, and they are absolutely gorgeous!

The photos, which were released earlier in February 2018, show the loved-up husband and wife pose in a number of scenarios, including by the poolside.

In one image, Asad and Veena relax together on a sunlounger donning casual wear.

Veena rocks reflective sunglasses, a green emoji sweatshirt and shiny leggings. Her hair is slicked back into a ponytail. 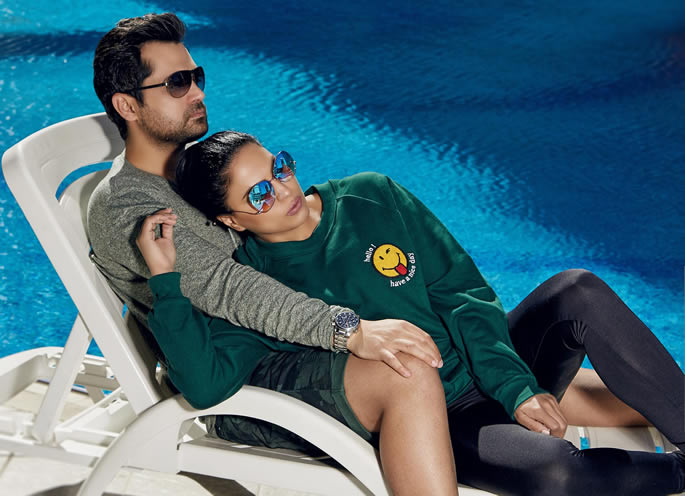 Asad also goes for the dressed down look with cargo shorts and sunnies.

Another shot sees the couple leaning casually against a wall. The former Bigg Boss contestant wears a sea-blue coloured kameez with high slits and leggings and suede boots. Veena looks stunning with her hair in big loose waves.

Asad meanwhile, shows off his casual sports attire with slogan joggers and a black cardigan. 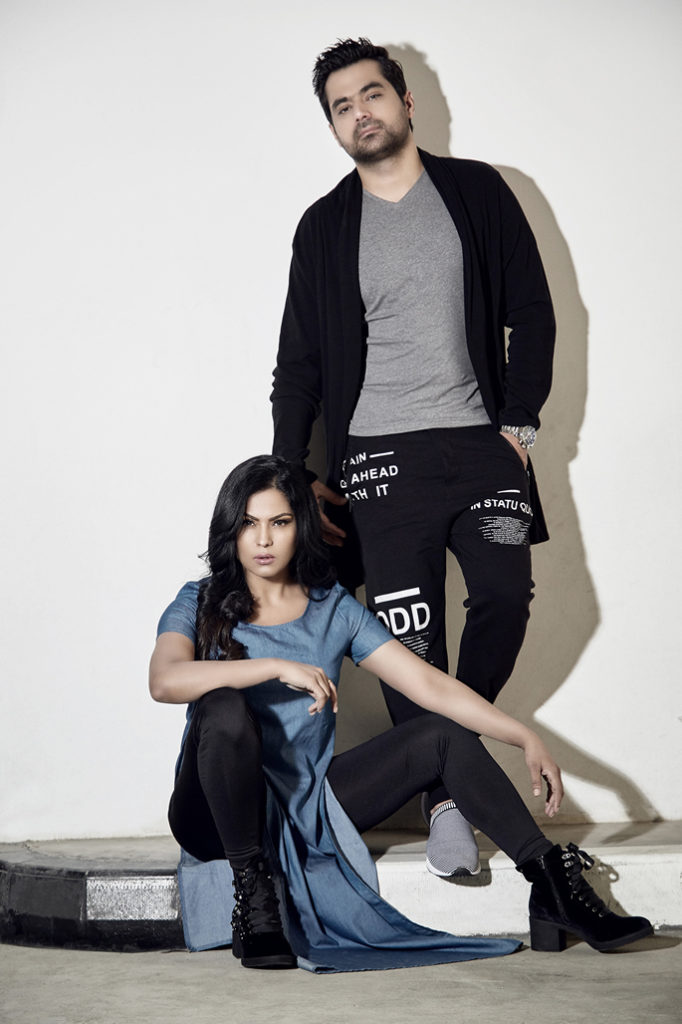 This next shot sees the couple pose in head-to-toe denim. Veena wears a pale blue bow-shirt with white jeans featuring gold studs. Her hair, styled in ringlets, is pushed to the side.

She matches her attire with trendy gold high-top sneakers. Her husband opts for faded jeans, a retro denim jacket and a plain black v-neck t-shirt. 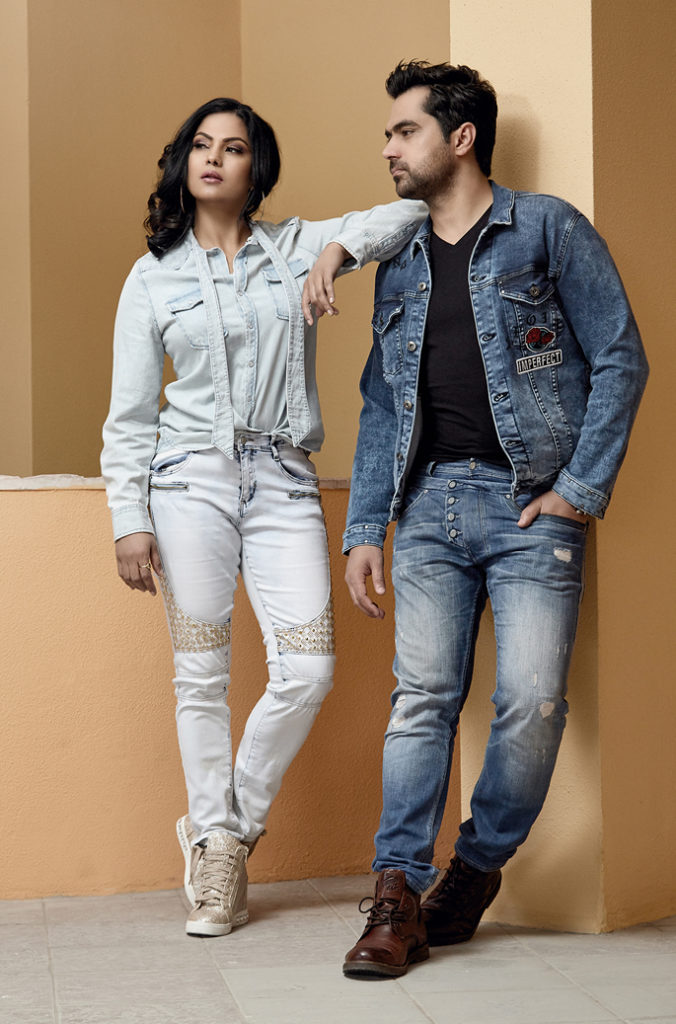 Other images from the photo shoot see Asad in a dapper striped jacket and white trousers. It’s a classic French-seaside look as they sit beside the pool.

Veena is all smiles as she wears a black and white sweatshirt and a tulle skirt. She glams up the look with smokey eyes and a pink lip. 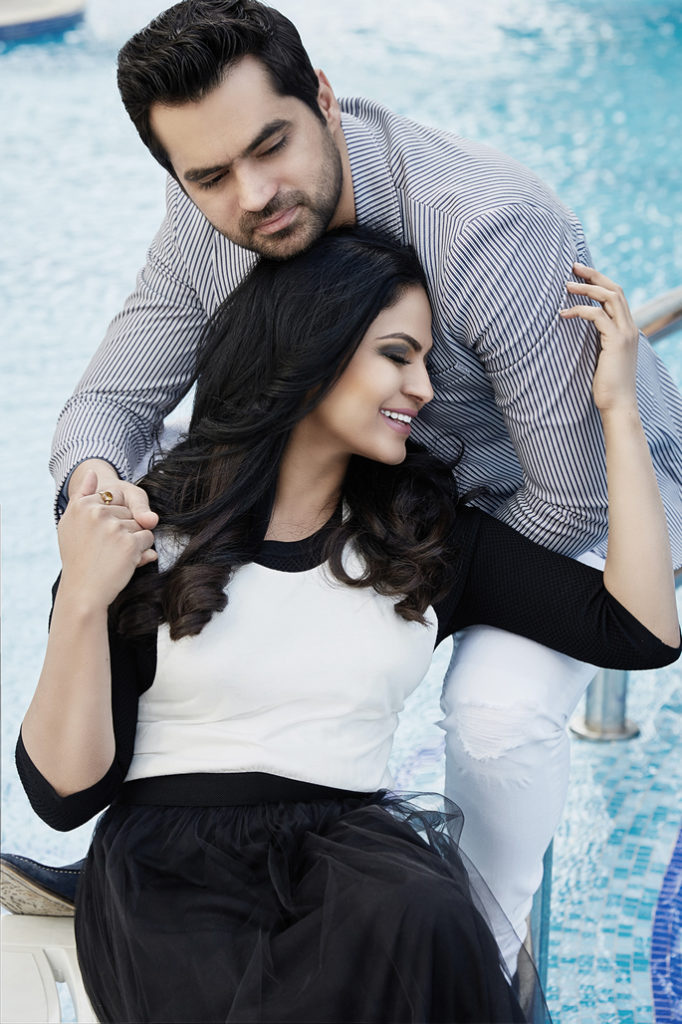 The couple, who tied the knot in 2013, has two sons together, Amal Asad Khan and Abram Khan Khattak.

The duo regularly makes headlines, especially with Veena being viewed as a controversial figure in Pakistan.

Gaining fame as a TV host and actress, Veena caused an outcry in Pakistan after allegedly posing nude for the cover of FHM India. She and her husband were also sentenced to prison for being part of a blasphemous show that aired on Geo TV.

Back in 2017, there were reports of an alleged rift between the two, as Veena accused Asad of ‘beating’ and ‘disrespecting’ her.

However, their former feud appears to have completely dissipated now, as this photoshoot suggests. The happy family were also recently spotted in Dubai, where Veena and her kids were videoed having fun on the beach.

The photoshoot reportedly ties in with the couple’s song launch later in the year. Titled, ‘Ye Kya Baat Hui Hay’, the song is allegedly a comic take on the current political scenario of Pakistan.

This is not the first song that Veena has sung for her country. In 2017, Veena released a track, ‘Aye Dushman-e-Watan’, dedicated to Pakistan’s armed forces.

Veena has also been keeping busy over the last few months, co-hosting the popular TV show, Crorepati Game Show alongside the likes of Mustafa Chaudhry and Murtaza Chaudhry. The show which airs every weekend on Pak News offers luxury prizes to contestants.

Take a look at more pictures from Veena and Asad’s beautiful photo shoot below: 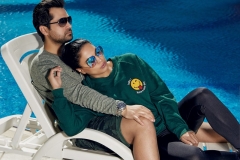 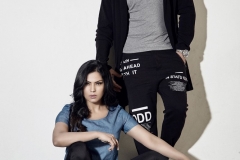 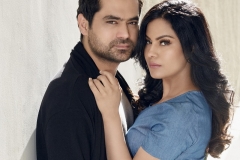 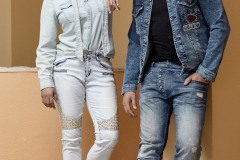 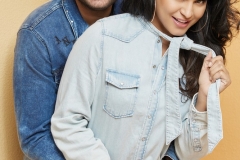 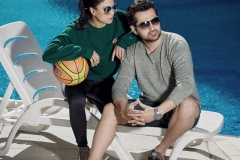 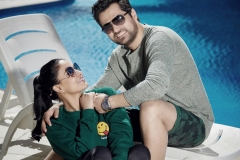 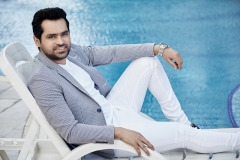 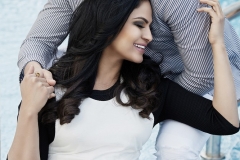 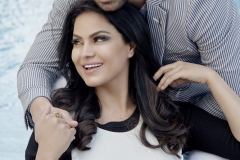 Nazhat is an ambitious 'Desi' woman with interests in news and lifestyle. As a writer with a determined journalistic flair, she firmly believes in the motto "an investment in knowledge pays the best interest," by Benjamin Franklin.
Esha Gupta and Ali Fazal dazzle at India’s Marks & Spencer Show
Best Dressed at the Nykaa Femina Beauty Awards 2018