In a shocking turn of events, actress Veena Malik has been sentenced to 26 years of imprisonment in her native country of Pakistan. She is accused of blasphemy by religious courts.

"I have complete faith in Pakistan’s higher courts and judiciary."

Pakistan’s favourite controversy queen, Veena Malik, has landed in trouble again. This time bigger than ever.

The Pakistani actress along with her husband, Asad Bashir Khatak and the owner of Geo TV, Mir Shakil-ur-Rahman as well as the TV host Shaista Wahidi, has been sentenced to 26 years of imprisonment by an anti-terrorism court for allegedly airing a blasphemous show.

The morning show, broadcasted live on Geo TV on May 26th 2014, featured Veena Malik with her husband in a mock marriage and them dancing while a group of Sufi musicians sang a devotional song about the wedding of the Prophet Muhammad’s daughter. 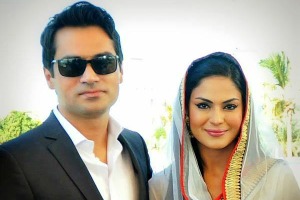 Though similar shows by other TV channels in the past have gone unnoticed, this TV broadcast set off a storm on social media.

The verdict by the Judge Shahbaz Khan against the four was announced on behalf of an anti-terror court in the Gilgit-Baltistan region, who said that all four had committed profanity.

He said the convicts may appeal in the Regional High Court in Gilgit-Baltistan.

The four people convicted have also been ordered to pay a fine of PK Rs 1.3 million, sell their properties and surrender their passports, according to a copy of the court order which states:

“The malicious acts of the proclaimed offenders ignited the sentiments of all the Muslims of the country and hurt the feelings, which cannot be taken lightly and there is need to strictly curb such tendency.”

A state lawyer to defend the convicts has been arranged by the court as no lawyer has come forward on behalf of the accused so far.

Reports claim than the four accused are out of Pakistan as of now. Rahman resides in UAE and the others have allegedly fled the country after receiving threats by militant organisations. 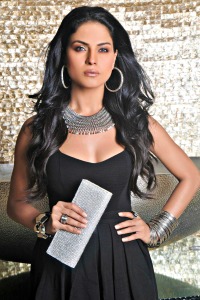 Malik who returned to Dubai in early November 2014 from the US after giving birth to a baby boy is shocked and has her lawyer ready to appeal against the verdict in higher courts:

“Whenever there is an issue a court will look into the facts of the case. We were not even present in the court at the time of the verdict. I have belief and trust in courts.”

She maintains that she is innocent and would never commit blasphemy: “We are planning to return to Pakistan in December,” says Veena.

“I have always been a person who faced troubles by looking it in the eye. I have faced highs and lows in my life. But I am sure I haven’t done anything wrong.”

The blasphemy case was registered on May 26, 2014 in a police station in Gilgit by Himayatullah Khan, deputy chief of the anti-Shia organisation Ahl-e-Sunnat Wal Jamaat (ASWJ).

Just when the world thought, Veena Malik is peacefully enjoying her newly married life with her newborn son Abram, it seems the controversies couldn’t stand the separation for too long.

Komal is a cinéaste, who believes she was born to love films. Apart from working as assistant Director in Bollywood, she finds herself doing photography or watching Simpsons. “All I have in life is my imagination and I love it that way!”
Happy Ending ~ Review
Rensil D’Silva tackles Corruption with Ungli