Three young abandoned children in New Delhi railway station have been found and rescued by Twitter! DESIblitz has more.

The children were too scared, upset and tired to recount their journey to the railway station.

If you still don’t buy into the power of social media in the world that we live in today, this story about three abandoned children in India may just change your mind.

Rumana, Raja and Sanya have been quite literally saved by Twitter, after a local reporter tweeted for help on the children’s behalf on March 17, 2015.

Abhishek, from the Press Trust of India, found the three children, aged 7, 5 and 4 respectively, huddled together on platform 16 of New Delhi railway station.

The poor kids were all by themselves. They sat on the ground to rest while leaning against each other for support.

Abhishek sent out a tweet calling for help, which attracted immediate attention and alerted the local authorities.

DCP Madhur Verma of North Delhi, tagged in one of the 239 retweets, called the local Station House Officer (SHO) about the abandoned children.

Verma said: “Police began searching for the children. They could not be found on platform 16. I then called Abhishek and spoke to him.”

About an hour later, the police finally located them ‘outside the air-conditioned hall on the Ajmeri Gate side of the railway station’.

Can someone help these helpless kids at New Delhi Railway Station near platform 16 entrance pic.twitter.com/oYjS2vsHzU

The police said the children were too scared, upset and tired to recount their journey to the railway station.

But after offering them some food and reassurance, the seven-year-old Rumana was able to tell the police where they lived and that they had been left at the station by their father. 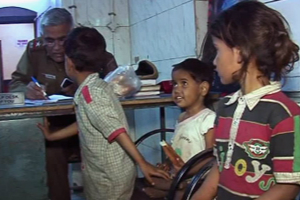 Sanjay Bhatia, the Deputy Commissioner of Police, said: “The eldest of the three, Rumana, told us that their house was somewhere near Nabi Karim police station.

“Policemen took the children to that area and walked around until they identified their house.

He continued: “It was Rumana who was able to identify her house. When we knocked on the door, their mother Tabassum was asleep.”

Her ignorance of her children’s whereabouts further alarmed the police. Tabassum explained that her husband, who has been separated from the family, would often come to take the children away and drop them back home without letting her know.

However, her story changed when she spoke with Newsline.

Tabassum claimed she believed her three children might have been taken away by Nasreen, one of her elder daughters who lives with their father in Kanpur.

She said: “My husband Jabbaz used to come home drunk every night and beat me. So I and my three children came to Delhi from Kanpur around two months ago and began living with my cousin Reshma in Nabi Karim.” 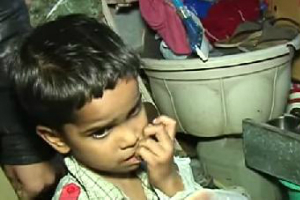 “[One of my daughters] Nasreen often comes to Delhi from Kanpur all by herself and takes the three siblings away to play and then she drops them back at our home or outside the Karol Bagh Phase-I factory where I work.

She added: “I have scolded her numerous times for doing this, but she does not pay any heed. She herself had walked away a year ago and I filed a missing person’s complaint with police. But she returned a few days later.

“That was why I wasn’t too worried about the children this time. They too would eventually come back. It is unlikely that my husband would have come all this way. I did not tell police about Nasreen because they wouldn’t believe me. So I told them the father must have come.”

The police has taken Tabassum’s statement and is currently investigating how and why the children were abandoned at the railway station. Their father is expected to be called in for questioning.

Images courtesy of The Indian Express and NDTV