Actor-comedian Kapil Sharma and his longtime girlfriend Ginni Chatrath have got married In Jalandhar on December 12, 2018. Punjabi stars were in attendance.

“The wedding of Kapil is very important. For a cold time, it is a very warm wedding.”

Kapil and Ginni who come from a Punjabi background had a traditional Indian ceremony. Close family and friends were present for their big day.

The couple have known each other for over twelve years, from the time when Chatrath was studying in Jalandhar.

On their wedding day, the duo perfectly complimented each other in a green and a red traditional outfit.

In their wedding trousseau, both of them did look nothing less than a royal couple. Ginni wore a stunning red lehenga, pairing it with some beautiful jewellery. 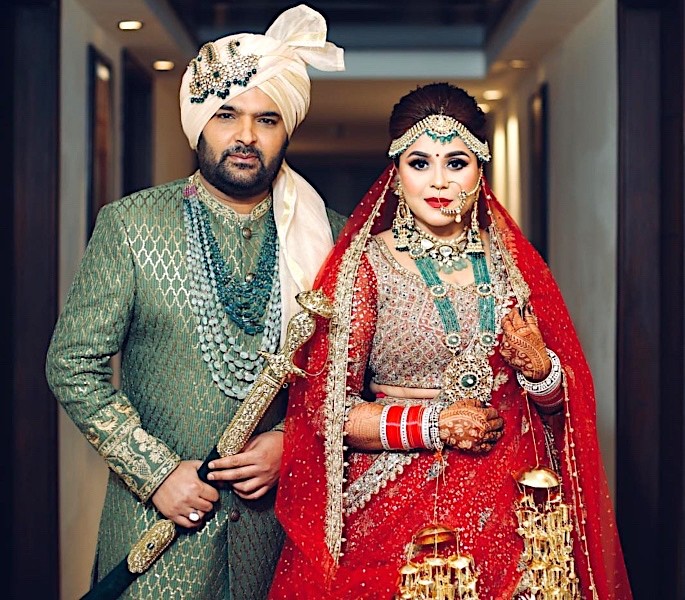 The bridal choora and kaleerein finished the look of Chatrath.

Sharma, on the other hand, was wearing a sherwani, which did showcase the finer threadwork details of this garment.

The husband and wife pair also posed for photo opportunities at the venue of their wedding.

The stage was decorated with a red theme. There was a main sofa for the bride and groom, along with armchairs on either side for the guests.

Kapil FC, a fan club for the TV host did share a video of a LIVE band at the venue, captioning it: “Everything is set.”

Punjabi Sufi singer Hans Raj Hans who made an appearance spoke to the media prior to the event saying:

“The wedding of Kapil is very important. For a cold time, it is a very warm wedding.”

Bharti Singh, Krishna Abhishek are close celebrity friends that did mark their presence at the wedding. Gurdas Maan also attended, performing some of his memorable tracks.

Punjabi singer Ranjit Bawa who was seen dancing away at the wedding shared his best moments from the wedding.

He first posted a video of Maan’s performance with the following caption: “With One nd only Living legend @gurdasmaanjeeyo saab.”

Bawa then put up a picture from the wedding, captioning it with a beautiful message: 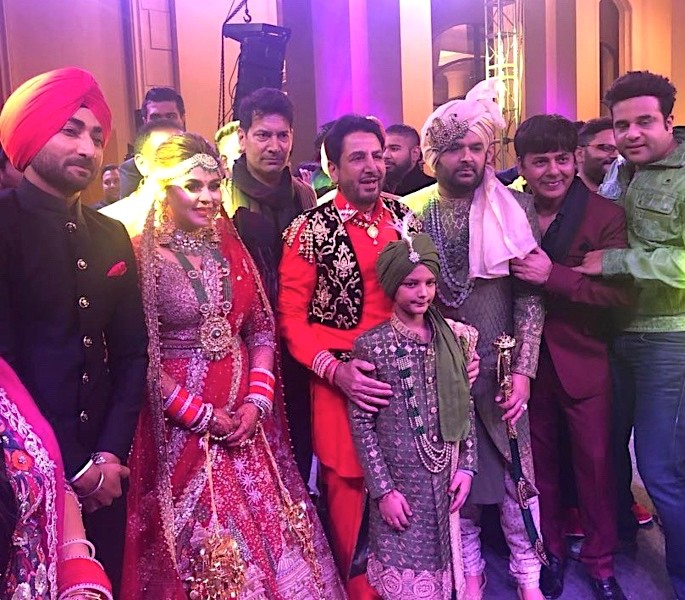 Meanwhile, celebrities sent congratulatory messages to the newlyweds on social media. Artists such as Hina Khan, Guru Randhawa, Jassie Gill did post their best wishes for Kapil and Ginni.

Sunil Grover who became famous after appearing on the popular television programme, Comedy Nights with Kapil (2013-2016) also congratulated him:

“We both have done some good work together so, there is an emotional connection. I congratulate him on his wedding. I pray that he remains happy.”

Grover adding some humour continued: “I hope that lady luck works for him. Earlier he used to create jokes on people’s married life, now he will know how it feels after getting married.”

Stand-up comedian Rajiv Thakur also shared a similar message for the TV host, alongside an image on Instagram: 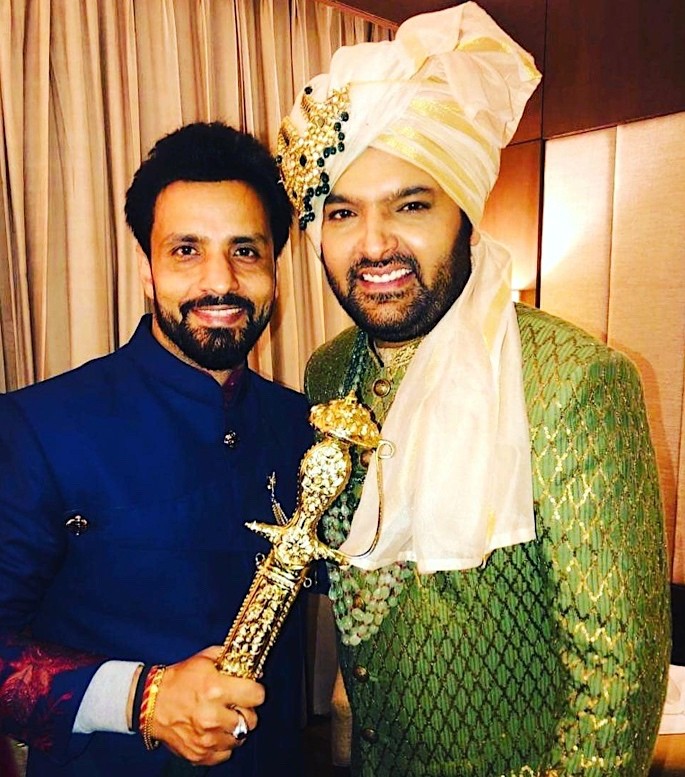 Fans went on sites such as Twitter to congratulate the newly married couple. One user tweeted:

“Omggg @KapilSharmaK9 you look amazing ! Heartiest congratulations for you big day ! Sooo good to see you back ! Excited for Ur comeback !

Heartiest congratulations for you big day ! Sooo good to see you back ! Excited for Ur comeback !

Gurpreet Ghuggi who was also present at the wedding told the media:

“He is a like a younger brother, child or you can say a friend to me. Hence I am very happy for him because it’s as if I just got my son married off.

“This is because I have seen every aspect of his life. The Almighty has given him the status. I felt as if after a long time we have had happiness in our home.

“After my younger brother’s wedding 12 years ago, I have seen great atmosphere here again.”

The festivities began a few days before the wedding with a mata ki chowki, followed by a mehendi ceremony. The baraat made the journey from Amritsar to Jalandhar. 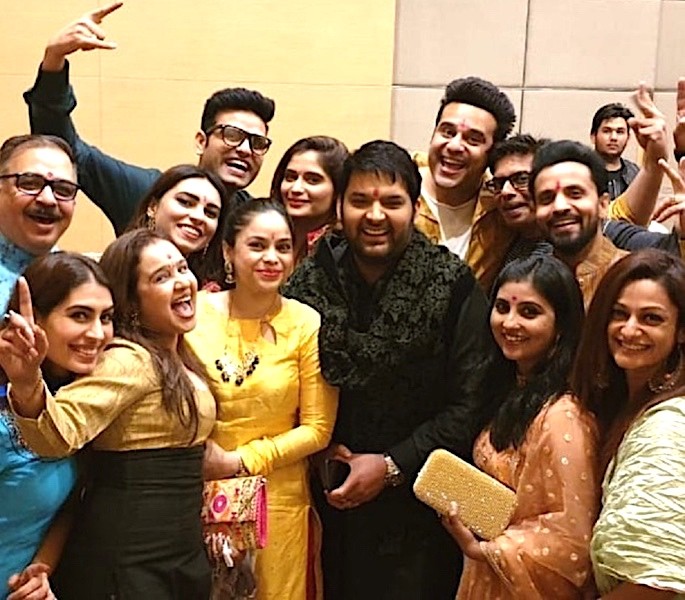 “We wanted to keep it low key. But Ginni is the only daughter in her family. Her folks wanted the wedding to be on a lavish scale.

“And I completely understand their sentiments. My mother also wants the wedding to be lavish.” 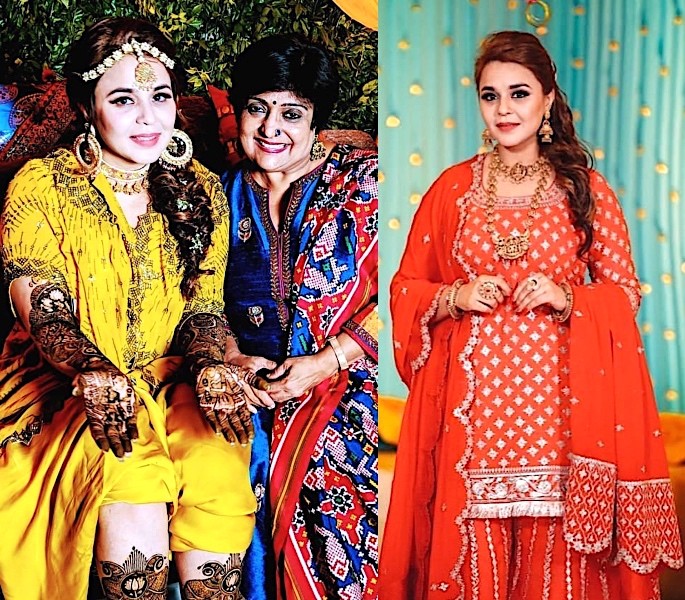 Kapil who had made an announcement of his wedding to Ginni in 2017 met her for the first time at Hans Raj Mahila Maha Vidyalaya college in Jalandhar when auditioning some students.

In 2005 Chatrath was studying B.Com, while Sharma did stand-up comedy on a smaller scale.

Ginni was a talented theatre artist also at the time. From the very outset, Chatrath was there for Kapil from his struggling days to when reaching Mumbai.

The duo went to Mumbai sharing an apartment together. Even when Sharma’s late father was suffering from cancer, Ginni was a big support to him.

Another interesting fact about the two is that they both participated in the comedy show Hans Baliye (2009).

The show which was telecast on Star One, saw Karisma Kapoor and David Dhawan being the judges. Despite not being victorious on the show, their relationship did become more solid.

Certain artistic individuals have been celebrating the wedding with some art. 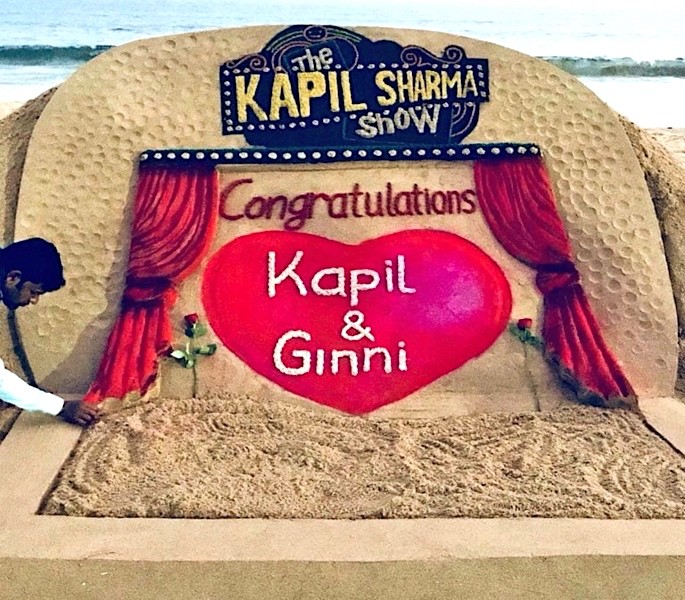 Sudarsan Pattnaik, a sand artist from Odisha produced a creative sand art to highlight the wedding of the couple popularly known as Kaneet.

Fans of Kapil Sharma are happy that their favourite host has entered marital bliss, especially after being away from TV because of all the controversies.

The newlyweds will host a wedding reception in Amritsar on December 14, 2018. A reception for their glamour industry friends takes place in Mumbai on December 24, 2018.