Two sisters from Bury have been jailed for their roles in a multi-million-pound drugs ring from a business called ‘The Beauty Booth’.

"there were frantic efforts to contact him from Shazia Din"

Two sisters were among 17 people jailed for their roles in a huge drug trafficking operation.

Over 60kg of Class A drugs, £300,000 in criminal cash, a hydraulic press, drugs paraphernalia, a handgun and ammunition were seized following Operation Heart.

Manchester Crown Court heard that the sisters of a crime family from Bury joined forces with the daughter of a major drug dealer from Doncaster.

The Bury family set up a beauty business called ‘The Beauty Booth’ as a front to launder dirty money made from huge profits.

Drug addicts and those indebted to dealers got involved and were recruited as couriers to carry the drugs and cash.

However, her relationship with Peter Wrafter saw the supply and distribution of heroin, cocaine and amphetamines throughout South Yorkshire.

After Wrafter’s arrest and incarceration, Shazia made her son, Hassan, the figurehead of the business. Natalie Wrafter took over from her father.

Mr Ford said: “Natalie would source Class A drugs on a wholesale amount for onward supply in Doncaster, contact was then made with Shazia and the North West, then couriers would be set up sometimes from Manchester and sometimes from Doncaster.

“On December 19, 2018, encrypted devices belonging to Shazia Din and Lewis Yates were engaged in a data session which took place not long after a phone call between Peter Wrafter and Shazia Din.

“On January 3 Yates was seen leaving an address in Doncaster and surveillance officers saw Wrafter pass Yates a cash sum.

“Yates then drove to Cheetham Hill, where he was stopped by officers – he had children in the vehicle and in the passenger seat was a bag containing £10,000 and encrypted mobile phone.

“Four days later Wrafter was arrested in Doncaster in a Mercedes van – a revolver and ammunition, as well as cash and phones, were recovered.

“At the house he shared with his daughter Natalie, they found it contained 26 kilos of amphetamine, a kilo of heroin and encrypted phones.

“After his arrest, there were frantic efforts to contact him from Shazia Din and her son Hassan.”

A month after Wrafter’s arrest, Shazia and Natalie were spotted exchanging thousands of pounds worth of drugs money in Doncaster Prison car park, prior to visiting Wrafter.

Natalie and drugs “wholesaler” Adam Hopewell managed a group of drugs couriers in Yorkshire and Shazia ran her own couriers.

One of those was James Dickson, who moved a kilogram of heroin from Crumpsall to Doncaster in a car belonging to Alan Forster on February 5, 2019.

On February 27, Hassan handed a “large holdall” to David Wright in a back alley in Whitefield.

Wright handed Hassan an envelope before travelling to Wythenshawe.

The holdall was then given to another courier named Arjan Bedesha. However, officers intercepted Bedesha’s car.

Mr Ford explained: “He was stopped by surveillance officers who found the £170,000 cash in his spare wheel compartment.”

In March 2019, police raided a flat in Bury which the Din family used as a ‘safehouse’. Officers found £66,000 in cash and a money counting machine, 1kg of cannabis, digital scales, and a vacuum packing machine.

This resulted in several couriers being caught, including Rachael Turpin, Forster’s partner.

She was in regular contact with Forster and Hopewell during one late-night run to South Yorkshire with £50,000 worth of cocaine.

Jonathan Ramsbottom drove a kilogram of cocaine to the Pennines where he met Melvyn Sheldon on April 26.

In April 2019, Wright and Sheldon were seen speaking through the passenger window of Wright’s van.

Prosecutors said: “In the passenger seat there was a kilo of cocaine recovered as well as an encrypted phone.

“When he was arrested and cautioned Wright said: ‘it was f***ing stupid doing this, I wish I didn’t take the job’.”

In May 2019, a garage in Ashton Old Road, Manchester, was raided.

Police recovered 1.5kg of heroin, scales, and a hydraulic press for preparing the drug in bulk amounts for the wholesale trade.

The garage was linked to Lee Davis, who had been in contact with Shazia.

Police caught Davis loading heroin into his van outside a Salford flat a week later. In total, 28 kilos of heroin worth just under £3m was recovered from the vehicle and inside the flat.

Police arrested Shazia and Hassan at their home in The Drive, and Abia at her home in Woodman Drive.

The sisters and Hassan were in possession of cash, encrypted mobile phones, and luxury items including Rolex watches and a £60,000 diamond ring.

They also had use of expensive lease cars, including a Mercedes worth £50,000. 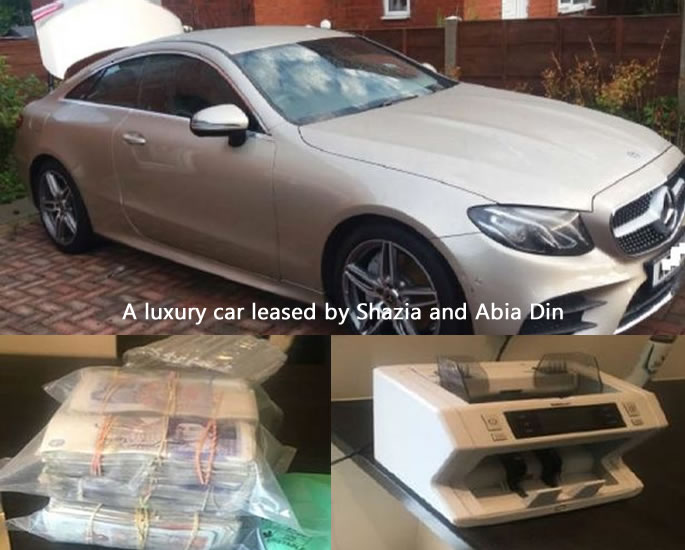 Judge Alan Conrad QC said: “This was a professional, organised conspiracy network, with carefully chosen workers, some of them yourselves, who were employed ranging from organisers to facilitators to couriers and their assistants, and those who were prepared to warehouse the drugs.

“The main conspiracy was long-running and carefully organised, apart from the very large amounts of drugs and cash involved.

“The effects of controlled drugs on the users of addiction, even some amongst you, are ill-health, degradation and sometimes even death – together with the financial pressure causing acquisitive crime to follow.”

Manchester Evening News reported that the remaining defendants were sentenced to a total of more than 70 years in prison.

Dhiren is a journalism graduate with a passion for gaming, watching films and sports. He also enjoys cooking from time to time. His motto is to “Live life one day at a time.”
36 British MPs seek Intervention in India’s Farmers Protest
Banker selling Fake Covid-19 certificates & Spending Gains in Dubai