A court heard that two gangster sisters from Bury ran an online shop which acted as a front for their money and drugs racket.

"we uncovered their illicit activities across the country"

Two gangster sisters were among 20 people convicted for running one of the biggest drugs operations in the north of England.

Together with Shazia’s son Hassan, they ran an online beauty business, selling styling products on Amazon.

However, it was not beauty products which financed the family’s luxury purchases.

According to police, their ‘Beauty Booth’ company, based in a unit on the Chesham Industrial Estate, was a front for money laundering and supplying drugs.

Meanwhile, Peter Wrafter is an established drug dealer from Doncaster.

Shazia was in a relationship with Wrafter and the family supplied him with heroin, cocaine and amphetamines, which were distributed throughout South Yorkshire-based networks.

But Din’s drugs operation began to unravel when police stopped a car in Cheetham Hill on January 3, 2019. It was being driven by Lewis Yates, suspected of being a courier for Shazia. He was arrested.

Police found £10,000 and an encrypted mobile phone inside the car.

Four days later, police stopped Wrafter in his Mercedes van in Doncaster. Inside the van, they found a handgun, ammunition, cash, and two mobile phones.

In a second vehicle outside his house, police recovered 28kg of amphetamines, 1kg of heroin, and an encrypted phone.

After he was jailed, his daughter Natalie took over and became Shazia’s link.

Shazia and Natalie were seen exchanging thousands of pounds worth of drug money in the car park of Doncaster Prison, where Wrafter was an inmate.

Natalie and drugs ‘wholesaler’ Adam Hopewell controlled a group of drugs couriers in Yorkshire while Shazia ran her own couriers.

Police say the gangster sisters and Hassan were heavily involved in the family’s drug dealing and money laundering.

In February 2019, Hassan was spotted by undercover officers passing a holdall to David Wright in Bury. Wright gave Hassan an envelope before driving to Longley Lane in Wythenshawe.

The holdall was then given to another courier named Arjan Bedesha. 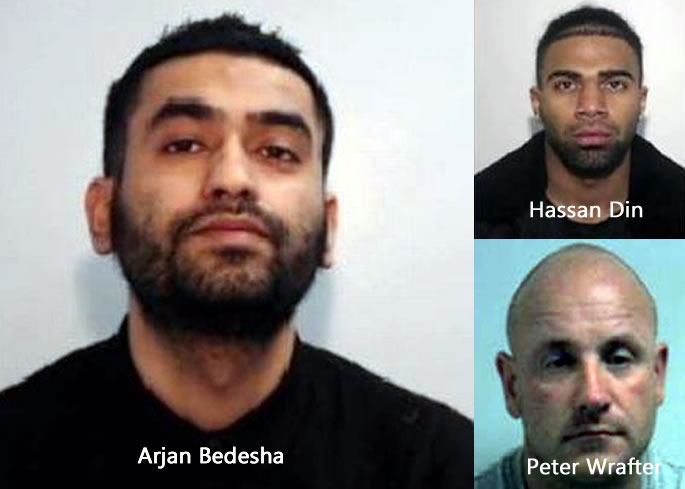 But officers from Operation Heart, run by GMP and South Yorkshire Police, intercepted Bedesha’s car in Knutsford as he was travelling to London.

Police later raided an apartment in Bury which was being used by the Dins as a safehouse. They found £66,000 in cash and a money counting machine, 1kg of cannabis, digital scales, and a vacuum packing machine.

In May 2019, a garage in Ashton Old Road, Manchester, was raided. Drugs paraphernalia was recovered including 1.5kg of heroin, scales, and a hydraulic press for preparing the drug in bulk amounts for the wholesale trade.

The garage was linked to Lee Davis, who had encrypted phone calls with Shazia.

A week later, Davis was seen loading heroin into his van outside a Salford flat. In total, 28kg of heroin worth almost £3 million was recovered from the van and inside the flat.

Police later raided Shazia and Hassan at their home in Bury. Abia was also arrested at her home.

All were in possession of cash, encrypted mobile phones, and luxury items including Rolex watches and a £60,000 diamond ring.

They also had use of expensive lease cars, including a Mercedes worth £50,000. 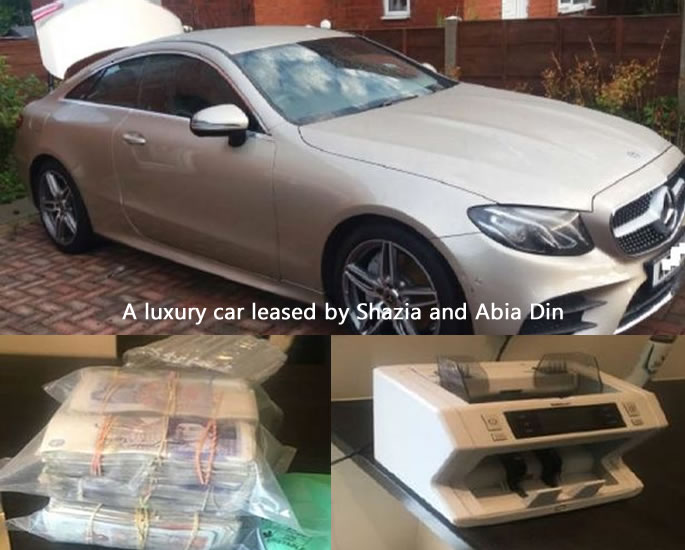 Five people have already been sentenced and another 15, including the three members of the Din family, and Natalie Wrafter, will be sentenced in July 2020, following court hearings in Greater Manchester and South Yorkshire.

Detective Inspector Lee Griffin, of GMP’s Serious and Organised Crime Group, said: “During the operation we scrutinised this group intensely as we uncovered their illicit activities across the country, enabling us to gather evidence and unravel the conspiracy.

“It is thanks to the hard work of all the officers in this case from Greater Manchester and South Yorkshire Police that a group of criminals using sophisticated methods have been stopped from deluging our streets with huge amounts of drugs.

“We have disrupted the supply of drugs and cash payments between the regions of not just Greater Manchester and South Yorkshire, but across the UK.

“Those who are responsible for supplying illegal drugs to vulnerable people deserve no place in our society, and our community is a safer place with them behind bars.

“It was also clear in this case vulnerable people were exploited to further the illegal trade in drugs.”

“I hope this sends a clear message that GMP will work with our colleagues around the UK to relentlessly pursue those persons who supply harmful drugs and we will go to great lengths to bring them to justice.” 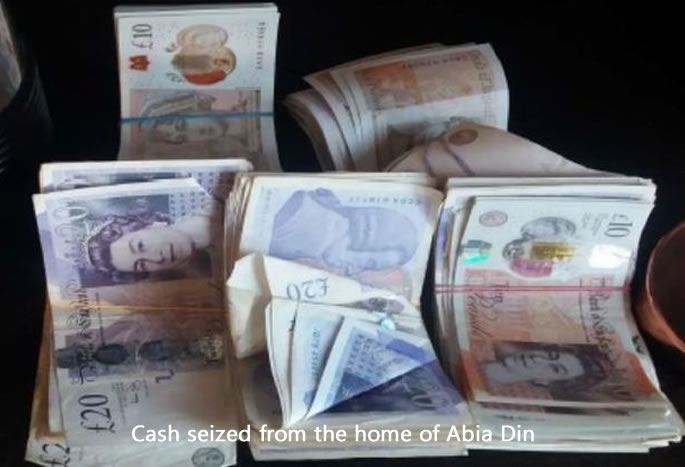 “This is a significant result for both South Yorkshire and Greater Manchester, as a large number of individuals involved in serious organised crime are now behind bars.

“Our partnership working also saw the seizure of significant amounts of drugs, which cause untold harm within our communities, and cash – ill-gotten gains from this group’s criminal lifestyle.

“We remain absolutely steadfast in our commitment to tackling organised crime and drug supply within Doncaster and South Yorkshire, to keep our residents safe.

“We know that organised criminal groups such as this can often prey on our most vulnerable members of the community and make people feel intimidated or scared to tell the police what’s happening.

“Forces across the country will stop at nothing to bring organised criminals before the courts and where those groups cross force borders, we will work together and combine our efforts to bring to justice those who would seek to cause harm and fear within our communities.”

Peter Wrafter and Arjan Bedesha are among five who have been imprisoned.

Manchester Evening News reported that Wrafter is serving a 12-year sentence while Bedesha was jailed for three years and four months.

Dhiren is a journalism graduate with a passion for gaming, watching films and sports. He also enjoys cooking from time to time. His motto is to “Live life one day at a time.”
Indian Man Chops Tongue as Sacrifice to ‘Stop’ COVID-19 spread
Prince Charles praises Role of British Asians in COVID-19 Fight