The annual Asia House Bagri Foundation Literature Festival has kicked off with a series of pre-festival events for 2017. They include talks on Aleppo, an exploration of Chinese roots and a celebration of the life of poet Nikoloz Baratashvili.

Taking place at central London’s Asia House and sponsored by Cockayne Grants for the Arts, the festival has launched a new segment of talks named ‘Sin Cities: Vice and Virtue Across Asia’s Urban Landscapes’. Cities include the likes of Bangkok, Manila and Beirut. Authors who have written about these particular cities discuss the importance of place.

On 20th April 2017, ‘Sin Cities: Away in Four Indian Cities’ welcomed two women authors, Sangeeta Bandyopadhyay and Preti Taneja. The discussion took place in the Asia House library and was opened with traditional Asian music and an assortment of beverages for guests.

It was chaired by the founder of Tilted Axis Press, Deborah Smith, who stated she chose novellas by Bandyopadhyay and Taneja as they were “short”, had female leads and centred on the “psychological view of surroundings” regarding the places in which they are set.

Sangeeta Bandyopadhyay was unfortunately home in Kolkata and joined the discussion via Skype, talking till after midnight in India. She is the author of nine published novels and over fifty short stories. Her book Panty was written in 2004 and set in her home city, just following a much larger novel she had published.

Within her very poetic answers, she said that she was “haunted by the content” and simply had to write it up. Sangeeta Bandyopadhyay went on to discuss her “fever” for composing Panty and that there had “never been written in the history of Bengali literature” a story quite like it.

Panty is about a single woman who moves into an apartment in Kolkata and ends up finding a pair of leopard print underwear in a wardrobe. She begins to imagine the life of the owner and finds that their lives intertwine and may not be as different as she initially believed.

Deborah Smith mentioned that Panty uses “fragmented chapters” that are randomly numbered and has a theme of anonymity. This is purposely so the book can be read in any order or from any section. Putting the protagonist in an unfamiliar city is a way of forcing her to discover herself, even if it is through her imagination of another person.

She went on to discuss women as “holier than thou, mature, complex, sensitive” and that it targeted towards modern women as they are the centre stage of the world.

However, the book is highly recommended by those who do get past the title and overtly sexual nature. It has increased in popularity, especially among Bengali women.

One critic called the novella “the most honest acknowledgement I have read of that personal conflict”. Whilst others say it is a book “about shedding inhibitions and being the person you are – or rather trying to find who you are”.

The second speaker was author Preti Taneja, British author of Kumkum Malhotra which is set in Delhi and is not restricted to a specific date. It focuses on the economic change in India to capitalism and “how shame is passed on in generations”. 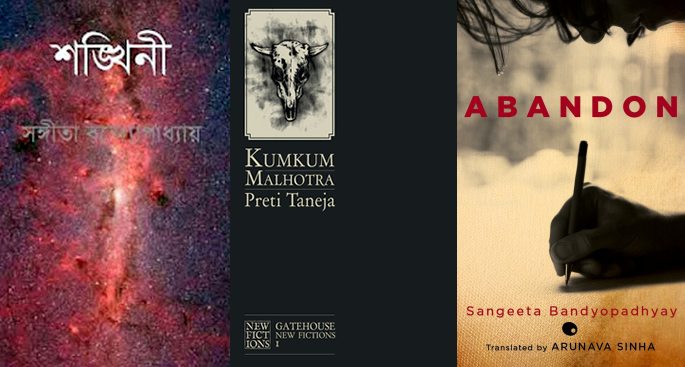 Taneja did a live reading of her work and later described her inspiration as her childhood experiences and looking back now as a woman. Taneja was always motivated by her recent completion of a Modernism dissertation and the study of Jean Rhys. She wanted to “bring forward” the ideas from the 1920s and 1930s.

In regards to translating her novels, the author explained she is not focused on writing to a specific language or having that affect her creative process. She followed stating she is “not divided in terms of identity” and refuses to divide her work into language categories.

Her new novel, We That Are Young, to be released in July 2017, is an Indian exploration and re-telling of Shakespeare’s King Lear. It is split into 5 sections and each is in their perspective in an “interior, psychological style”.

When asked about the complexity of reconstructing Shakespeare, Taneja – laughing – said it has “been the making of [her]”.

She found relations in the two texts to help her along the way. For example, the division of a kingdom in King Lear is mirrored with the partition of India and Pakistan.

It is clear both authors have made huge strides in their work for women, Asian communities and aiding the globalisation of India through their striking storytelling.

Their novellas showcase the rich vibrancy of Indian literature and how many women writers are combating gender misconceptions both at home and abroad.

The talk is just one of many from the Asia House Bagri Foundation Literature Festival 2017. Taking place from 9th to 26th May, Asia House in London’s Westminster are the headquarters for the annual festival. The event includes talks and workshops by talented writers, poets, publishers and translators.

For more information about the festival as a whole, read more from us here.

Nikita is an English and Creative Writing undergraduate. Her loves include literature, travelling and writing. She is a spiritual soul and a bit of a wanderer. Her motto is: “Be crystal.”
D&G and Smeg Kitchen’s New Love Affair with Pakistani Truck Art
Mahtab Hussain explores Masculinity and Identity in ‘You Get Me?’ Exhibition