In a quick turnaround, Bollywood actor Salman Khan has seen his 5-year jail sentence suspended by Mumbai High Court. The actor is now on bail until an appeal hearing in June 2015.

“We can fix a date in June or July whether he is guilty or not."

The prayers of fans have been answered. Judge Abhay Thipsay of the Mumbai High Court has granted Bollywood star, Salman Khan, bail and a suspension of his 5 year jail sentence pending appeal.

The star will no longer have to face jail for a fatal hit-and-run case that took place in Mumbai in 2002 and killed a homeless man.

Following a decade of postponed court sessions and legal misfires, Salman was found guilty of culpable homicide without an intent for murder on Wednesday 6th May, 2015, and sentenced to 5 years in jail.

After being taken into custody, he was immediately given a 2-day interim bail. On the final day of Salman’s interim bail, the appeal hearing began in the hope of suspending the actor’s 5 year sentence. 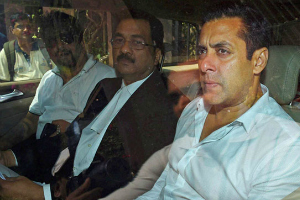 Salman’s defence lawyer, Amit Desai stood against public prosecutor Sandeep Shinde. Desai argued that of the four witnesses in the car on the night of the crash, only one, police constable Ravindra Patil’s, was examined.

Desai added that singer Kamaal Khan was also in the car at the time, but his statement was not considered by the court.

Desai presented a strong appeal, and the court session went in his favour. After hearing both sides, Judge Abhay Thipsay said: “We can fix a date in June or July whether he is guilty or not.

“We cannot take pleasure in the fact that someone is in custody. There is no law that says if there is alcohol (in blood) it is culpable homicide.”

The Judge added that that Salman must first go to trial court to execute a fresh bail bond as his 2-day interim bail is ending today (Friday 8th May, 2015).

In what has been the most commented upon court case for Bollywood, public reaction to Salman’s release is one of joy and relief.

Fans who had gathered outside Salman’s residence in a show of support for their favourite actor, celebrated in high spirits.

One fan even attempted suicide outside the Mumbai High Court. He was later taken to hospital. Immediately after the suspension was granted, the hashtag #SalmanFridayRelease began trending on Twitter:

#SalmanFridayRelease is a hit ! HC suspends sentence before going on vacation ! #SalmanOnBail

The biggest Friday release Salman has and ever will have given by the HC. Prob to stop fans from committing suicide. #SalmanFridayRelease

While some may still argue whether this suspension is deserved, many are unsurprised by the news. Former Mumbai Police Commissioner Satyapal Singh said:

“What happened day before yesterday brought hope for people that a person big or small is equal before the law.”

Salman was notably not present in court to see his sentenced suspended. He was exempt as he broke down in sessions court on Wednesday. Sister Alvira Agnihotri was the only Khan family member present.

With bail granted, Salman will now have to wait until June or July 2015 to have his appeal heard as the Bombay High Court are out of session due to holidays.

Aisha an English literature graduate, is a keen editorial writer. She adores reading, theatre, and anything arts related. She is a creative soul and is always reinventing herself. Her motto is: “Life is too short, so eat dessert first!”
Salman Khan Jailed for 5 Years for Hit-and-Run
Deepika Padukone shines in Piku