Bollywood actor Salman Khan has been sentenced to a 5 year jail term for illegally poaching blackbucks in 1998. A Jodhpur court announced the verdict along with a fine.

"I am disappointed for Salman Khan... I don't know why he is being singled out"

A Jodhpur court has found Bollywood actor Salman Khan guilty of blackbuck poaching in 1998. The star has been sentenced to a 5-year jail term.

The actor will reportedly spend the night in Jodhpur Central Jail with his bail hearing taking place on Friday 6th April 2018 at 10.30am. He has also been fined Rs 10,000.

Khan reportedly hunted two rare antelope in Rajasthan 20 years ago while he was shooting for the film, Hum Saath Saath Hain. The incident took place in ‘Bhagoda ki Dhani’ in Kankani village near to Jodhpur at the start of October 1998.

The case also incriminated fellow actors Saif Ali Khan, Sonali Bendre, Tabu and Neelam Kothari. They were all accused of abetting the crime. However, the Indian court acquitted them of all charges. Also acquitted was a Rajasthani businessman, Dushyant Singh.

Khan’s conviction is under Section 51 of the Wildlife (Protection) Act, as blackbucks appear on the endangered animals list. It carries a maximum sentence of 6 years with a 1 year minimum jail time.

It is the fourth case against the actor relating to the 1998 poaching incident. The actor was acquitted of three of these cases, including an Arms Act violation in 2017, where he had been accused of using illegal firearms to kill the blackbucks.

Public Prosecutor Bhawani Singh told CNN News18: “We are happy with the judgment. I haven’t read the complete order. Salman Khan has been given 5 year simple imprisonment and ten thousand fine.

“If he files an appeal and the court considers it, then he can get the bail.”

Khan was present at the verdict which was given on Thursday 5th April 2018. He was accompanied by his two sisters, Arpita Khan Sharma and Alvira Agnihotri. Both allegedly broke down in court. Salman was reported as remaining ‘cool and calm’. 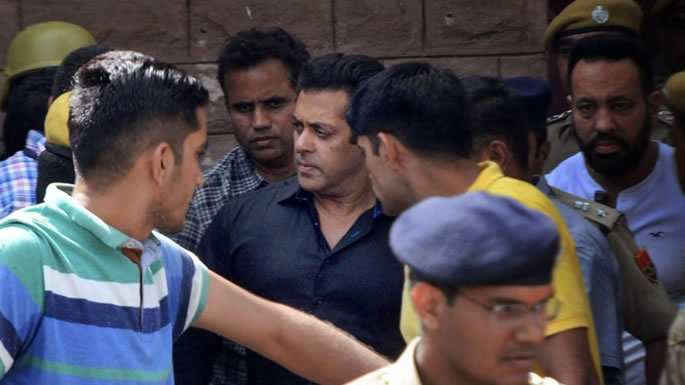 Samir Soni, the husband of the accused Neelam Kothari, expressed his relief at his wife’s acquittal. He told media: “I am happy for Neelam but I am disappointed for Salman Khan… I don’t know why he is being singled out.”

Many have also turned to Twitter to react to the court verdict. In particular, Bollywood veteran Jaya Bachchan has spoken out in Salman’s defence:

“I feel bad. He should be given relief. He has done a lot of humanitarian work,” she said according to DNA.

It is thought that the Bishnoi Sabha, a community that is committed to protecting the revered blackbucks will appeal against the acquittals of the other actors. The Bishnoi community were the ones that originally filed the case against Salman.

Meanwhile, Khan is expected to make his appeal to the Rajasthan High Court on the morning of Friday 6th April 2018.