Rochdale Man dragged Woman out of Car and Beat Her

Bilal Muhammed, from Rochdale, dragged a woman out of his vehicle and brutally assaulted her. The incident happened on January 4, 2019.

"She describes him as appearing to have 'pure anger' on his eyes."

Bilal Muhammed, aged 24, from Rochdale, was jailed for 21 months at Manchester Minshull Street Crown Court for beating a woman.

He staged a car crash by deliberately driving his red Volkswagen into a lamp post then falsely claimed that the woman had crashed while trying to run him over.

Muhammed actually dragged the victim from the vehicle and beat her until she lost consciousness following a row about him sending pictures of them on a night out together to her boyfriend.

He initially attempted to blame the victim for causing her own injuries but after the police refused to believe his account, Muhammed confessed.

The incident happened on January 4, 2019, when Muhammed and his friends went on a night out in Manchester.

They had gone to a bar before deciding to go home. As they went home, Muhammed sent a picture of himself and the victim to her boyfriend. This caused tension between the two.

The group stopped at McDonald’s and went inside, however, there was a row between Muhammed and the woman about the text.

This resulted in the woman leaving in Muhammed’s car with the others.

Andrew Mackintosh, prosecuting, said: “Shortly after arriving, the defendant also arrived as he had obtained a lift.

“He then approached the vehicle and the complainant still sat in the driver’s seat. She describes him as appearing to have ‘pure anger’ on his eyes.

“He opened the driver’s door and punched the complainant in the face, dragged her by her hair from the vehicle, threw her to the floor and continued to punch and kick her to the head and body.

“The force was so much that she lost consciousness.”

The woman informed the police that she was assaulted and that she saw Muhammed get into his car and drive off after. 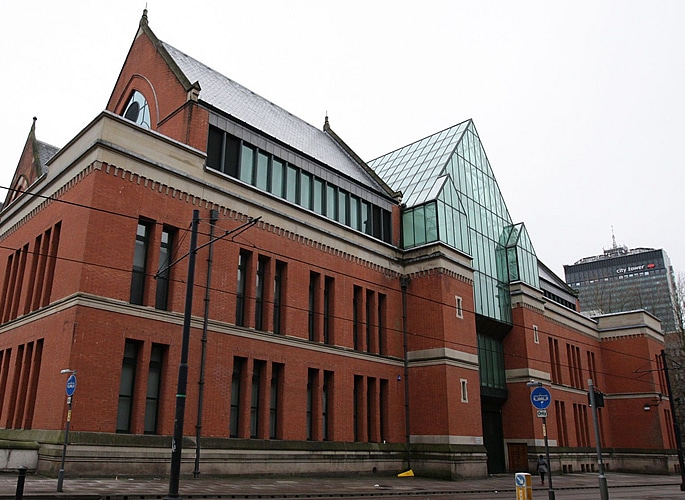 Mr Mackintosh added: “The defendant then got into his vehicle and drove off to a neighbouring street where he slowed down and drove it intentionally into a lamp post.

“He then got out of the vehicle and made a telephone call to the police saying the complainant had taken his vehicle without his permission and crashed and he sustained injuries when she had driven that vehicle towards him.”

Muhammed was arrested for the false report. However, he prepared a statement and claimed he never assaulted the woman.

He maintained his account that the woman had taken his car and crashed into a lamp post which is what caused her facial injuries.

Muhammed stated that she drove at his right leg, causing bruises and then proceeded to punch him while he was on the floor.

In reality, the woman had significant bruising on her face and head as well as cuts to her knees.

A CT scan found that the woman suffered a broken left eye socket and a fracture to the eye.

In a victim impact statement, the woman said:

“I was told I would recover from some of my facial injuries.

The victim stated that she feels depressed and rarely goes outside. She also struggles to sleep and thinks about what happened to her every night.

“I have nightmares and flashbacks and I won’t forget the smile on his face when he opened the door.”

“This has affected my confidence and my friends and family tell me I’m pushing them away and that I’m becoming reclusive.

“I have a young daughter and I don’t know how this has affected me and the impact it will have on her to see mummy so anxious.”

“It’s unfortunate that the complainant decided to drive off in the defendant’s motor vehicle leaving him in McDonald’s, this was not a sensible thing to do.

“But his response to that was completely wrong and disproportionate. His allegations were completely false – although this wasn’t the case that it caused someone to be arrested and spend time in custody and be charged with an offence.”

Mr McKenna went on to explain that his client will lose his accommodation if he is jailed and it may affect his relationship with his girlfriend.

Judge Maurice Greene said: “One can understand if you were angered by her taking your car but your reaction was completely inappropriate, exaggerated and criminal.

“Her injuries were serious, there were many punches and kicks at night when you were under the influence of alcohol. This could have had serious consequences for the complainant.”

Muhammed pleaded guilty to GBH and perverting the course of justice. He has had 10 previous offences including battery, assault and affray.

Bilal Muhammed was sentenced to 21 months in prison.

Dhiren is a journalism graduate with a passion for gaming, watching films and sports. He also enjoys cooking from time to time. His motto is to “Live life one day at a time.”
Indian Husband kills Wife demanding Rs 100 from Her
Canadian Model gets Harassed in Pakistan by Men in Car