Business investor Ratan Tata came across an Indian dog collar startup and was so impressed that he has invested in the business.

"I talked to people to find a way to save their lives."

Veteran businessman and former Tata Group chairman Ratan Tata invested in a dog collar startup after he was impressed by the idea and its founder Shantanu Naidu, aged 27.

After seeing the business, Tata invested in it. He also employed Shantanu as an executive assistant.

Shantanu now handles Tata’s investments in over 30 startups while his Pune-based dog collar company continues to flourish with the investment.

Shantanu revealed that he came up with the idea in 2015 as he discovered that many dogs were being killed on the roads at night.

He said: “I talked to people to find a way to save their lives. I came to know that not being able to see the dogs at night was the major cause of accidents.

“Since I was an automobile engineer, I immediately got the idea to make a collar for dogs.

“This allowed drivers to see them remotely at night without a street light. The collar was made of the best grade reflective material.”

While he did not have the funds to grow the innovative business, Motopaws did not go unnoticed.

People were telling Shantanu that he had a great idea because it was reducing the likelihood of dogs being run over during poor visibility.

The small startup was written about in the Tata Group newsletter and eventually came to the attention of Ratan Tata, a dog lover.

Shantanu said: “People told me to write to Mr Tata about this.”

After being urged to do so by his father, Shantanu wrote a letter to Tata but did not hear back.

“It was understandable; I mean it’s Mr Tata! But my father was hopeful.”

One day, Shantanu received an invitation to meet Ratan Tata at his office in Mumbai.

“Mr Tata expressed a lot of love for what we were doing given his immense love for street dogs.”

“He asked me what kind of support we would like.

“I said we were not looking for any support but us being students, he insisted and made an undisclosed investment in our endeavour.”

Mr Tata personally invested in Motopaws and it has now expanded to 11 cities in India. Shantanu also has a dedicated team of employees. 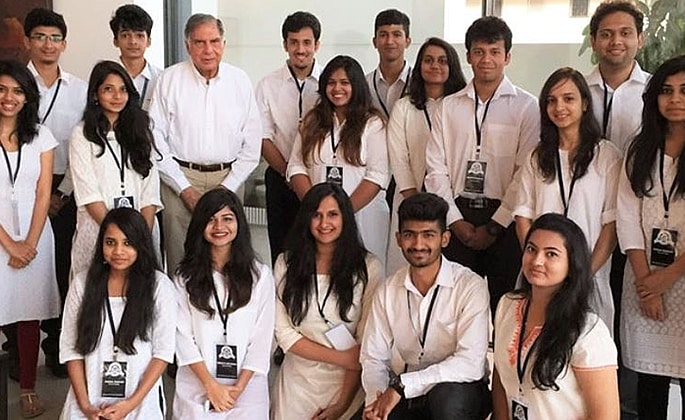 “Recently, we received requests from Nepal and Malaysia. We already have an all-women team in Nepal. We are also exploring larger animals like cows, etc, which also lose their lives when they stray on the highway.”

Shantanu explained that he is the fifth generation of his family working for Tata Group, mostly as engineers and technicians.

Following the investment, Shantanu has regularly kept in touch with Ratan Tata, often asking for advice.

Shantanu told Mr Tata that he was going to do an MBA at Cornell University. When he returned from university, he expected to work on a veterinary project but Mr Tata asked him to work at his office, which he accepted.

The young entrepreneur explained that he is always learning from Tata and called it “priceless”.

Motopaws is one of the many startups that Ratan Tata has invested in as he is a firm believer of India’s startups.

Many companies get Mr Tata’s experience as well as financial support. Their chances of success also increase.

Dhiren is a journalism graduate with a passion for gaming, watching films and sports. He also enjoys cooking from time to time. His motto is to “Live life one day at a time.”
Dutch Pakistani starts #IamRabiPirzada to Support Rabi Videos
Indian Woman divorced by Husband for having Crooked Teeth