Supported by the Pakistan Football Federation (PFF), Platinum FA’s, Shehneela Ahmed has made history by bringing Pakistani women’s footballer, Almira Rafeeque, to play in England’s Premier League. Almira is all set to trial for Tottenham Hotspur.

"I'm excited, this will be a new episode for Pakistan Football especially for our inspiring ladies.”

Another historic moment for ethnic women in sport, young footballer, Almira Rafeeque is the first British-born Pakistani female to make her debut in the English Premier League.

The 20-year-old Asian talent will take part in tryouts for the Tottenham Hotspur women’s team on July 14, 2015.

This big breakthrough has been championed by Britain’s and World’s first Asian female football agent for the English FA, Shehneela Ahmed. Shehneela has the backing and full support of the Pakistan Football Federation (PFF) and Pakistan national women footballers.

With the help of Shehneela and the PFF, Almira hopes this historic moment will launch her career in professional football.

Speaking to the media, Almira said: “I’m still surprised this opportunity has come my way.

“It’s been a lifelong dream of mine to become a professional footballer and I’m grateful to the PFF for putting faith in me after I represented the national team, and for getting me in touch with Shehneela.”

Born in the UK, the talented Almira moved to Pakistan in 2008 and started playing with Young Rising Stars FC in Islamabad. The footballer returned to the UK to complete her studies before continuing with the Young Rising Stars in 2013. She has also played with Luton Town FC.

The midfielder has already represented Pakistan in the South Asian Football Women’s Championship in November 2014. She has also won the national women’s championship on two occasions. 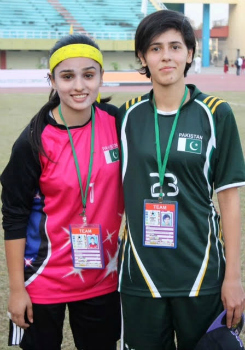 Now, she will be looking to make her move into the English Premier League as the very first female Pakistani player.

Speaking about this incredible opportunity, Shehneela said: “The next few days for some ladies their dream of playing in the English football league will be a dream come true.

“I’m excited, this will be a new episode for Pakistan Football especially for our inspiring ladies.”

Support for women’s sport in Pakistan has been generally overlooked in the past.

A mixture of culture and strict tradition has prevented many girls and women to take up their sporting passions and represent their country on a professional level.

But Pakistan Football Federation Official, Fahad Khan believes that women’s football has been pivotal for improving the livelihood of many rural women in Pakistan:

“Women’s football in Pakistan has played a frontline role in bringing about a cultural coherence, curbing the class difference, nailing the ethnic and religious biases and moreover has shown the real face of Pakistan to the world where women are getting equal opportunity like men to show their skill and wear the national flag on their sleeve.

“Our women’s national team has players from various religious and ethnic backgrounds, belonging to different social factions and come from areas where women is perceived to be suppressed like Baluchistan, interior Sindh, southern Punjab, FATA, [and] Gilgit.”

Fahad hopes that many of these players will be able to continue their careers internationally:

“England is a good base to pursue a professional footballing career, and we just want our players to have this opportunity to progress.” 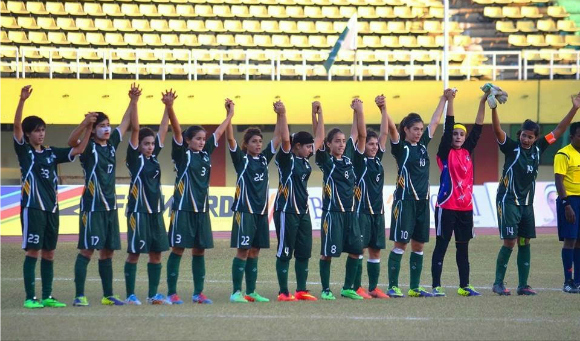 “Getting into Europe will be a game changer not only for Pakistan but also for Europe who will have an opening for skilled players with such diversity.

“As for people in Pakistan, [it’s] a great opportunity to showcase our talent in one of the most competitive Leagues in the world and will as a result multiply the growth of women’s football as a career in Pakistan manifolds.”

Ahmed hopes that with Almira as a role model, more future stars from the country will be encouraged to participate in sport:

“I’m amazed with the talent we have in Pakistan’s women national football team, no one was willing to turn the page of excellent opportunities for these ladies, until I took the first step.

“Just a glimpse of these players from Pakistan’s Women’s Football team will surely make you head to the nearest football stadium,” Shehneela says.

While Almira’s fate in the English Premier League is yet to be decided, we wish her all the best with her promising football career.

Aisha an English literature graduate, is a keen editorial writer. She adores reading, theatre, and anything arts related. She is a creative soul and is always reinventing herself. Her motto is: “Life is too short, so eat dessert first!”
India’s Historic Seven at Wimbledon 2015
IPL Teams suspended over Corruption Scandal