“This will be a new episode for Pakistan Football especially for our inspiring ladies.”

Having played for Luton before, it seems Almira decides to return and make a bigger impact this time.

The details of her contract are yet to be announced, but she is signed with Luton on a long term deal and will make her debut on against Stevenage FC on August 1, 2015.

Almira has Shehneela Ahmed to thank for making this remarkable step in her career.

Shehneela is the world’s and the UK’s first Asian female football agent. She has been liaising with the officials from the Pakistan Football Federation (PFF) for a number of months to make this happen.

She has a strong faith in Almira as a role model for many aspiring Pakistani female footballers in Pakistan and around the world.

Shehneela said: “I’ll be working with Almira and other female footballers as they need proper guidance. I’ll do what I can to help them. 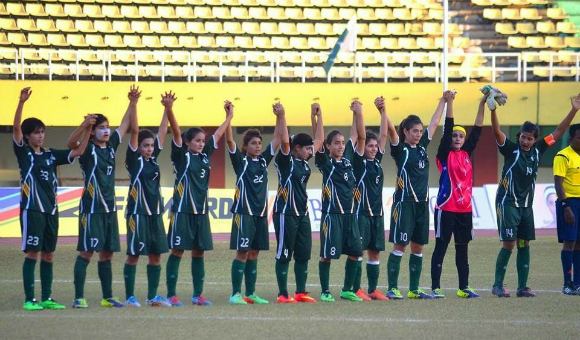 “The next few days for some ladies their dream of playing in the English football league will be a dream come true.

“I’m excited, this will be a new episode for Pakistan Football especially for our inspiring ladies.

“I’m amazed with the talent we have in Pakistan’s women national football team, no one was willing to turn the page of excellent opportunities for these ladies, until I took the first step.”

PFF official, Fahad Khan, said: “Women football in Pakistan has played a frontline role in bringing about a cultural coherence, curbing the class difference, nailing the ethnic and religious biases.

“[They have] shown the real face of Pakistan to the world where women are getting equal opportunity like men to show their skill and wear the national flag on their sleeve.”

Almira went to Pakistan in 2008 to play in Islamabad with Young Rising Stars FC. She came back to the UK for higher education, but returned to football in Pakistan in 2013.

The young talent represented Pakistan at the South Asian Football Women’s Championship in November 2014 and even won the the national women’s championship twice.

Scarlett is an avid writer and pianist. Originally from Hong Kong, egg tart is her cure for homesickness. She loves music and film, enjoys travelling and watching sports. Her motto is “Take a leap, chase your dream, eat more cream.”
Shoaib Malik challenges Yuvraj Singh in Dance-Off
Wasim Akram attacked with Gunshots in Pakistan