In a federal meeting, Pakistan’s government passed a law to chemically castrate convicted rapists in the country.

"We need to ensure a safe environment for our citizens."

On November 25, 2020, Khan approved the law which would also fast track sexual assault cases, according to local reports.

The decision was made during a federal cabinet meeting, however, no official announcement has yet been made by Pakistan‘s government.

It was made after Pakistan’s law ministry presented a draft of the anti-rape ordinance at the meeting.

Khan said: “We need to ensure a safe environment for our citizens.”

PM Imran Khan has also said that repeat sexual offenders should be castrated; we wanted to be sure of Govt intentions before going on air with it, but Govt is serious we are told pic.twitter.com/mIB3n5Y8hZ

He said the legislation would be clear and transparent with strict enforcement by officials.

The draft legislation will increase women’s role in policing and improve witness protection.

Khan said rape survivors will be able to register complaints without fear and will have their identities protected by the government.

Member of the Senate of Pakistan Faisal Javed Khan said:

“As well as other points have been drafted, and will be implemented as soon as approved by Parliament.”

On September 14, he tweeted: “Rising incidences of child and female abuse.

“The harshest punishments for abusive savage beasts will lead to castration. Our government will legislate soon.”

Sexual harassment and violence against women are common in Pakistan.

Nearly 1,000 women are killed each year in so-called ‘honour killings’ for allegedly violating conservative norms on love and marriage.

Pakistan has witnessed an increase in rape incidents since 2018.

In 2018, a serial killer raped and murdered six-year-old Zainab Ansari in the eastern city of Kasur in Punjab province.

The case drew nationwide protests and Imran Ali was later sentenced to death.

In September 2020, two attackers pulled a woman out of her car which had broken down at night on a deserted highway near the city of Lahore.

They gang-raped her as her terrified children watched. Both men were later arrested.

The woman’s car had run out of petrol while she was out with her two children.

She called for assistance but was dragged from the vehicle and raped by two men as she waited by the side of the road.

Protests erupted after the lead investigator Umar Sheikh suggested the woman was to blame for the attack.

He was quoted saying that she should have travelled on a busier road during the day and checked her petrol before setting out. 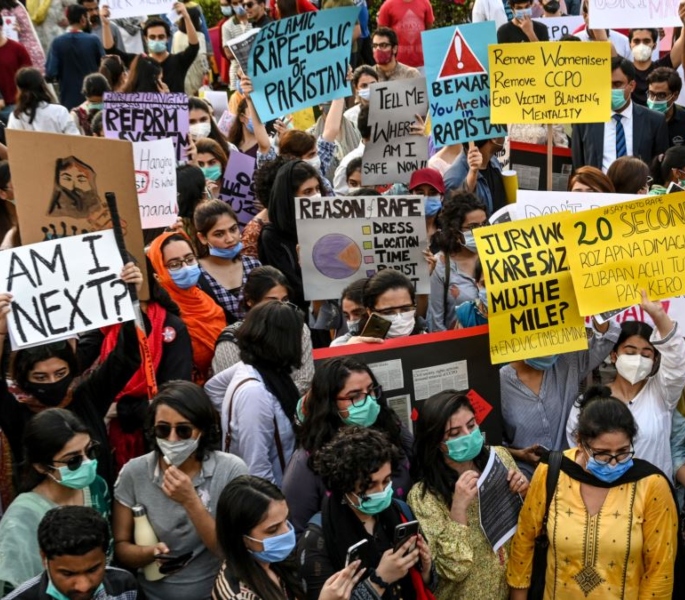 Amnesty International released a message in support of protesters saying:

“There have been too many victims and too few convictions of perpetrators in a criminal justice system characterised by impunity.”

“For an officer to effectively blame a woman for being gang-raped by saying she should have taken the GT Road.

“Or questioning as to why she went out in the night with her children is unacceptable & have taken up this issue.

“Nothing can ever rationalise the crime of rape. That’s it.”

Convicted rapists in Pakistan currently face a sentence of between 10 and 25 years in prison or the death penalty.

For gang-rape, the punishment is the death penalty or life imprisonment.

However, ineffective investigation and prosecution of rape cases are commonplace in the country.

Sexual and gender-based violence towards women is pervasive in Pakistan.

Many women fear they will be shamed or persecuted by police and others if they come forward.

In recent years, increasingly-vocal and social media-savvy feminists have been challenging the social norms that influence the way rape cases are handled in Pakistan.

The punishment of chemical castration is the Pakistani government’s way to acknowledge and prevail against the crime of rape in the country.

Akanksha is a media graduate, currently pursuing a postgraduate in Journalism. Her passions include current affairs and trends, TV and films, as well as travelling. Her life motto is 'Better an oops than a what if'.
Man Throws Acid on Crush after her Marriage to Another Man
Woman Molested by Man who Saved her from Chain Snatcher