Pakistan Fashion Week 4 returned in full force to wow London with its beautiful and elegant designs from some of the most talented fashion designers the nation has to offer.

"The response has been overwhelming on how well the show was this year."

London was wowed for the fourth time by Pakistan Fashion Week (PFW) held at the Grand Connaught Rooms, between June 8 and 9, 2013.

DESIblitz was there with exclusive access to witness this fashion fiesta.

Following the success of its last three shows, Riwayat hosted PFW 4, and has been gained both national and international attention since their creation in 2010.

Designers from Pakistan flew in to grace their collections on the catwalk in the same venue that Vivenne Westwood once graced her collection for London Fashion Week. 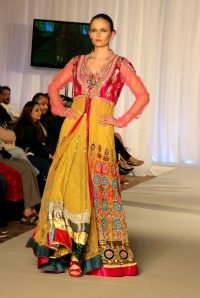 Front row at the fashion show included Deputy High Commissioner of Pakistan in London and Australian artist Gabriella Gilmi as well as representatives of the Hashoo Foundation.

Both Adnan Ansari and Chris East co-founders of Riwayat were busy organising and coordinating the event behind the scenes. Even though the pressure was on, both seemed cool and calm.

Adnan stated: “Each show has been a bigger success than the last. Something we did not dream would be so big. So the pressure is on to make sure this runs smoothly as the last three.”

Some of the highlights from the grand two day event:

One of the most famous fashion designers of the Pakistan Fashion industry, Zainab has formed a forte for herself due to her breath-taking clothing range from intricately embellished bridals to refreshingly cool pret wear.

The detail of the small white sequins against dark colours hit the audience with wonder. Some of the saris looked so graceful to the eye. Like swans the models glided across the catwalk. 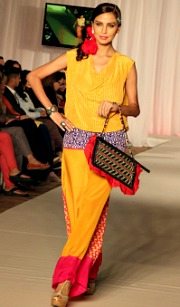 Bani D is for the hip traditionalists who looked for desi-boho apparel which lent structure to local Pakistani craftsmanship. World fusion mode using Pakistani cultural signatures is the essence of this Desi-Boho line of ready of wear.

In this collection, the imprint of the sands, the sky, the earth and the air of the Saraiki Belt meets western world cuts.

Its layers of metal work, chikankari, gota work, with some leather detailing with translucent colour washed net layers along with fabric folding techniques that makes for a unique combination.

Exhibiting during the Alchemy Festival London 2013, Rizwan exhibited again for PFW. Player of colours and bold cuts, Rizwan Ahmed, stocks at various stores in Pakistan, Middle East and the UK.

His collection came to life blazed in silver embellishments: “I want every woman to feel that they are in a mystical tale so that the pixies and fairies within them come out and play and embrace the charms femininity offers,” he said.

“I am a bridal wear designer that needs to be classic. So, it’s all about your priorities as a designer.”

Rana Noman has always brought a fusion of past and present. His international clientele in the Middle East, United Kingdom, India and United States allows his work to be appreciated by everyone. His inspiration of Moghul’s promotes Pakistani culture, tradition and beauty to all corners of the world:

“I like to go to old ancient roots of our culture. It fascinates me and I love to design my collections based on this,” says Rana. 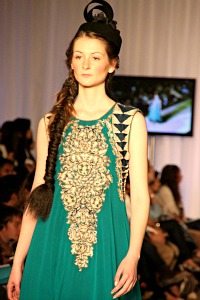 With fabrics that illuminate your clothes and home accessories, Gul Ahmed Textile Mills is one of the leading textile houses in the world. Simple meets style in his G Pret collection, yet it is defined by grandeur and plush styles. It is a formal line dictated and influenced by various fashion trends and styles.

Zaheer Abbas debuted his collection in 2010 at FPW2. He is persistently proving his metal as one of country’s finest talents. Recently awarded Best Emerging Talent in Fashion at the prestigious Lux Style Awards, Zaheer earned success in the shortest span of time.

Abbas’s design philosophy has always been simplicity. Best known for his love for the fabric chiffon, the airy silhouettes and attention to detail sets him apart.

Zaheer Abbas’s collection at 2012’s PFW 3, was the Grand Finale. One would not be able to tell if this was a Western Couture designer or not. His collection was pure white, something that Armani did two seasons ago. Each model that graced the catwalk with this couture looked like an angel descended from the heavens.

2013’s collection was sharp tailored cuts of trousers, shorts, jumpsuits. Dark charcoal colours were used and some navy blue. All models had their hair pushed back, long and straight (a signature of most Gucci catwalks) and all models were wearing oversized Geek glasses, bringing Geek Chic back in vogue.

Backstage the teams worked extremely hard to give that individual look to all the designers over the two day period. Taniya Khan led the make-up team and Reena J and Sonya led the hair style team. 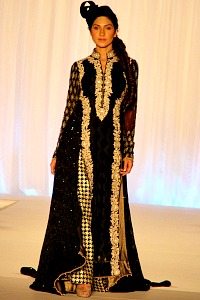 Both heads of make-up and hair worked extremely hard with all designers to make sure that the visual package that was graced for all to see was next to perfect. But it was not just the hair, makeup and couture outfits that worked together but also the music to entice our sense of sound.

Hypnotize Road Show worked with the designers for Pakistan Fashion Week: “The designers knew exactly the tempo of the music to match their design collections and how to set the mood for the audience,” said the director.

“We have worked on many fashion shows, and the importance that these designers gave to the music was a pleasant surprise. The whole package worked when we watched the show and saw the reaction of the audience.”

After the show both Adnan Ansari and Chris East had beaming smiles that the whole venue could see:

“It’s been hard work, but the response has been overwhelming on how well the show was this year,” said Chris East.

Official announcements for PFW 5 have already been released. November 2013, but this time with a bit more ooh la la, Paris.