The New Face of Sharons Couture 2013

The new Face of Sharons Couture was officially revealed on an evening of glamour, beauty and fashion. DESIblitz were present to report on a fantastic night.

"Each contestant was absolutely amazing. They were stunning."

Fashion met beauty on Friday 14th June 2013 as the new Face of Sharon’s Couture was unveiled in a glitzy and charming evening that saw music, dancing and entertainment.

Although the venue was almost littered with press and media on every corner, DESIblitz had the exclusive honour of covering the packed out event with interviews and gupshup with the models, designers and some big Brit-Asian names.

19 contestants from all walks of life came to battle for the prestigious honour of being able to wear the stunning tiara upon their graceful heads.

But while girls can’t resist anything that sparkles, the winner had much more to look forward to including a 12-month contract as the New Face of Sharon’s Couture and the chance to model the latest haute couture pieces in an extensive bridal shoot alongside, Sharons Couture very own, Haré Dhami. And we at DESIblitz have to admit, the competition was pretty fierce. 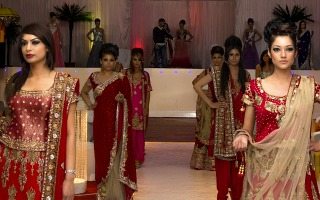 Sharon’s Couture is a bespoke fashion house that oozes bridal couture. It specialises in unique one-off pieces that you won’t find anywhere else.

The glamourous evening began with the arrival of the hosts, and they didn’t fail to impress, making their entrance in a black motor rickshaw courtesy of Al Faisal’s restaurant, through the surprised audience towards the edge of the stage.

Fashion Designer, model and the brains behind the Face of Sharons Couture which he began in 2009, Haré Dhami, was joined by the lovely presenter Rimy Thandi, to introduce the guests to a night of fashion, beauty and elegance.

Of course with so many beautiful girls vying for the crown, there had to be some judging taking place. Judges included the likes of supermodel Cameron Khan who was one of the first Asian male models in the UK. 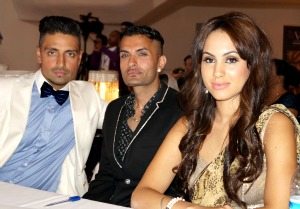 Joining him was model and celebrity turned Bollywood actress, Deana Uppal, who was a former Miss India UK and a Big Brother contestant in 2012.

Last years winner, Sofia Zolghadriha, was also on the panel. We’re pretty proud to admit that DESIblitz also joined the judging panel, with our Director in an infamous red shirt and tie!

With the judges all introduced and seated just a few yards away from the stage and the catwalk that ran through the audience, it was time to introduce the girls. The already enchanting evening suddenly turned up a few notches as the Fashion Show and Catwalk began.

The catwalk was opened by last year’s winner, Sofia, who looked effortlessly beautiful in a navy and magenta lehengha with heavy embossed silver detailing. Immediately after, each stunning girl showed off the latest bridal collection designs that Sharons Couture had to offer. 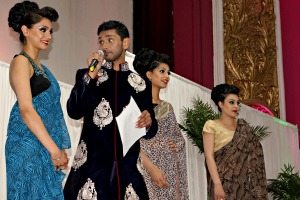 The exclusive bridal collection from the 2014 line had been designed by Haré himself. From beautiful red lehengas with intricate gold detailing, to an homage to summer pastel in pink and lavender gowns, to a gorgeous Royal blue and cream sari.

It was hard to tell that most of these girls had never been on the catwalk before, and they were delicately led down the stairs either side of the stage by topless attendants with ripped six-packs before elegantly gliding down the catwalk in their floor length outfits.

The bridal collection was followed by evening wear, and each girl arrived in light delicate saris of bold colour and animal prints, from zebra stripes, to leopard spots and cheetah prints. These were teamed with designer blouses. The collection oozed tribal sophistication and is perfect for summer parties.

The girls were introduced by tribal belly dancer Misty J. With the fashion catwalk over, it was time for the judging to begin. Each girl was asked a question by one of the judges on the panel. This was an interesting segment as it gave both judges and audiences a chance to get to know each of the girls better, and realise how diverse the competition really was.

From the oriental Raihan whose East Asian features blended perfectly with the ethnic dresses, Marlene who was half-Italian and half-Asian stunned in a beautiful green and the English Laura, who loved the opportunity to dress up as an Asian bride for a day. 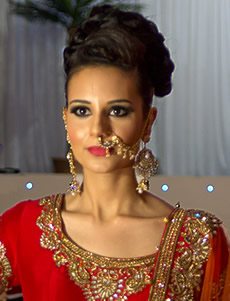 Despite being from such different backgrounds, each girl became Desi for the evening. They were confident, intelligent and independent and only served to make us proud of being British Asian.

Next was the deliberation process as the judges left the hall to discuss who should be the next Face of Sharon’s Couture, and the audience were left to wait in bated breath and eager anticipation for the announcement. In between, came a musical interlude by Kiran Dhanoa.

But the time eventually arrived, as the new Face of Sharons Couture, 2013 was finally announced to be 21 year old beauty, Nawal Parkar. Raihan won the Winner of the Public Vote, followed by Marlene and Shaan who came Joint Second Place, with the First Runner Up being Sonia in a blue number.

Winner Nawal, was ecstatic about her win: “I’m just so happy to make it to this far and to be an Ambassador of Sharons Couture. I just can’t wait to get started now. I’m really excited.”

When asked how it felt to be a British Asian model, Nawal said:

“I’m just really empowered by it. It’s such a good opportunity to represent the Asian culture in a British way.”

For Sharons Couture owner, Haré Dhami, the event was a huge success and all the effort and hard work paid off: 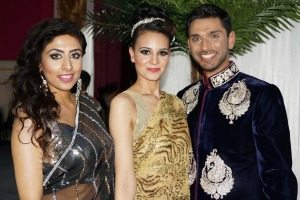 “Each contestant was absolutely amazing. They were stunning. I mean we had girls apply from all over, even overseas. I am so proud of each and every girl because I can just see how, when they came to the auditions, they’ve grown in confidence, and their walks, their presence. It was amazing.

“As well as the hosting, I was involved with the choreography, even dressing. So backstage it was manic. Rimy did a fantastic job. So it was a good night,” Haré added.

But the show didn’t end there as guests were invited to the After Party Show where they had a chance to mingle with the models and backstage crew as well as strut their Bhangra moves on the dance floor.

Nawal, the new Face of Sharons Couture 2013, has much to look forward over the coming months. As well as being the Brand Ambassador, she will also model numerous exclusive couture designs and bridal wear exclusive to Sharons Couture and represent the brand at all future events.