The Face of Inspiration Couture 2012

After the casting of earlier this year, the Global Brand Ambassador for Inspiration Couture 2012 was announced in a fun filled celebrity evening raising money and awareness for the Great Ormond Street Hospital charity.

"I will make sure that I make Inspiration Couture proud"

Based in London, Inspiration Couture brings a collection of authentic and modern ready-made outfits from bridal to casual wear, along with exquisite Bollywood inspired outfits custom made to measure and designed by renowned Delhi based designer Sagun.

Their ready made collections range from designer suits, bridal, party, casual and menswear for whatever the occasion. Inspiration Couture has an outfit for every individual requirement and taste.

If it’s a Bollywood outfit that inspires you, like Katrina’s black sari worn in Singh is Kingg (Teri Ore) or the pink lengha worn by Deepika Padukone in Om Shanti Om (Ajab Si), Inspiration Couture can take this or any other design and ingeniously tailor it so that it’s unique to you. 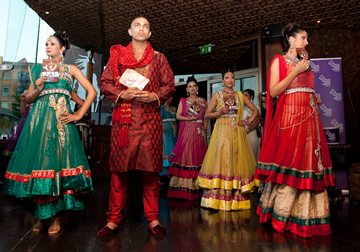 The company celebrated it’s first year anniversary on Saturday 26th May 2012 at the prestigious Gilgamesh, Camden, North London. DESIblitz were invited to cover the event and also help judge who will be the Global Brand Ambassador for Inspiration Couture 2012.

Inspiration Couture started 9th May 2011. Anshu Saggar, Owner/founder/director; it was her father who chose the name, as the outfits are all ‘Bollywood Inspired.’ Anshu wanted to make sure that the collection was available to everyone around the world and decided to market collection online.

Anshu was a leading actress in the South Indian film industry, Anshu has appeared in many movies alongside actors such as South Indian superstar Nagarjuna, Prashanth (famous for movie ‘Jeans’ with Aishwarya Rai) to name but a few. Anshu has good eye for Asian fashion and trends in the Asian film Industry.

As the company grew from strength to strength over the year, the next ‘Natural and Strategic’ step was to find a ‘Global’ brand ambassador to represent ‘Inspiration Couture’ worldwide. The Face of Inspiration Couture will represent today’s generation and connect with the young Asians who want to live and wear the Bollywood dream; The Asian As Seen on Stars (AASOS).

Earlier this year a casting was carried out and seven beautiful finalists were chosen; Roopinder, Esha, Tanu, Tabna, Nayna, Johti and Toral. All dressed in beautiful colourful outfits by Inspiration Couture. Each finalist graced the Catwalk elegantly showing extreme class and sophistication. 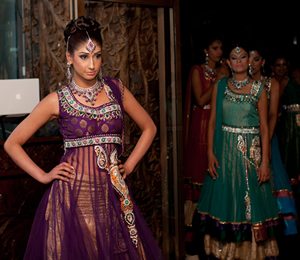 The announcement of the Global Brand Ambassador was announced at midnight with the beat of the Dhol as the prelude. All the finalists stood with great anticipation as the winner was announced as Johti Bhachu from West London. The utter shock on Johti’s face showed how unexpected this was for her. All other finalists gracefully congratulated Johti as Brand Ambassador.

Johti overwhelmed and when asked how she felt, “I was not expecting this at all. I am just grateful for being part of this as a finalist. This is a dream come true and I will make sure that I make Inspiration Couture proud and represent the company in a prestigious manner.”

Anshu stated “It was not an easy decision by any means. All the girls were beautiful and stunning and all worked closely together, with me and with my brand. But it was the final catwalk that did it.”

Watch the highlights of the Face of Inspiration Couture 2102 event.

“When Johti walked the catwalk, turned and posed for the camera’s I thought that is ‘Inspiration’ for every women who will want to wear the ‘Bollywood’ dream.”

This was a celebratory night with special guests Taz – Stereo Nation and performances by Romy Shay and Abbas Hassan. Special guests from the Western Industry were also invited, Celebrity Stylist to high profiled stars Stuart Philips and CEO Pily Mirazi of SpotLight Fashions International Modelling Agency were invited, intrigued and excited with the music and fashion from the South Indian descent. Food and drink was in full flow.

This fun-packed evening raised funds for a very deserving cause, the Great Ormond Street Hospital. This is a charity very close to Anshu’s heart who “found a deep affinity with the hospital and its work.”

Here some pictures from this wonderful celebration and event.