A Pakistani motorcyclist riding in the nude has been arrested by the police. It was an attempt to win a bet among his friends. DESIblitz has more.

“We arrested Shehroz on Saturday for overspeeding, violating traffic rules and for revealing his private organs in public.”

With Pakistan making headlines for so many turbulent social issues, this story has become a viral sensation.

A motorcyclist from Pakistan has been arrested for riding his vehicle in nude on a major road in Lahore on March 14, 2015.

Shehroz Khan was riding his motorcycle on one of the busiest roads in Lahore with absolutely no clothes on, fully naked. This was not the first instance for the 20-year-old Pakistani man.

Reuters report suggests that Shehroz had pulled the same stunt prior to this. According to the news agency, the man was ‘riding naked once again on Lahore’s Main Boulevard’.

Apparently, his first nude adventure was caught on video and went viral on social media. So when the police heard about his odd and nude exploit, they took immediate action to take the naked motorcyclist off the streets. 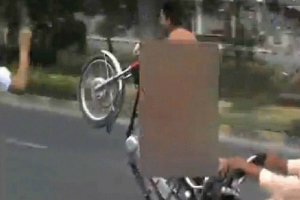 Like a dramatic scene taken from an adrenaline-filled action comedy movie, the police blocked the busy road from all sides, so that minimal traffic was allowed in and out of road.

Then, the police moved in on Shehroz as he approached the area. He was flagged down and arrested, according to the local police.

There was no doubt Shehroz was going to arrested for being nude in public. But apparently, that was not all.

Zulfiqar Butt, a police officer of Lahore, said: “We arrested Shehroz on Saturday for overspeeding, violating traffic rules and for revealing his private organs in public. He’s still in police custody though all three offences are bailable.”

Later on, the stranger than fiction incident was revealed to be an attempt to win a friendly bet. Sheroz, nicknamed ‘Rocket’, had made a bet with his friends earlier that he was daring enough to pull off the stunt.

He certainly did at the expense of police effort and blocked traffic. What is worse is he now has to gather money for bail. Perhaps, that could put his winnings from the bet to good use?

Word on the news is already spreading like fire on social media. The curious public could not wait to comment on the fascinating incident.

Good to know that Lahore police are not busy with anything else. Nude motorcyclist nabbed by police http://t.co/OrGPVpDTIW #Pakistan

Local TV channels have broadcasted footage of Shehroz riding in the nude through the city centre of Lahore with his friends cheering behind him on their bikes, while he was doing a ‘wheelie’.

Fortunately for the police, they were not naked, or it would have turned into a full-blown highway chase of a parade of naked motorcyclists!

However, it would appear the video has since been removed from the web. But if you fancy a view of the ‘brave’ and naked man, blurred still images are available online!

It will be interesting to see how the Pakistani police deal with Shehroz and his colourful antics, especially in a country where modesty is seen as a must. It’s common knowledge that the police do tend to use a heavy hand, but in this case, it will be intriguing to see where.

Shehroz is currently being held in police custody and awaits to be bailed.

Scarlett is an avid writer and pianist. Originally from Hong Kong, egg tart is her cure for homesickness. She loves music and film, enjoys travelling and watching sports. Her motto is “Take a leap, chase your dream, eat more cream.”
Salford named Gun Crime hub in Manchester
Halifax Banker admits to £450,000 fraud