Niladri Kumar ~ Creator of the Zitar

We met up with Indian classical and fusion musician, Niladri Kumar who is one of India’s greatest musicians. He also invented a new instrument called the ‘Zitar’.

"The whole process is challenging and a learning experience.”

Kumar is a multi-award winning musician and artist. He has worked on major blockbuster hits. He has even created his own musical instrument that fuses both the guitar and the sitar, smartly titled the ‘zitar.’

Music is in Kumar’s blood. He began his musical journey at a very early age. Since then, he has developed into a master of his genre.

Kumar was born on February 2, 1973 in Kolkata, India. He started learning the craft of music under the guidance of his father Pandit Kartick Kumar, a sitar maestro. His father was a disciple of late Ravi Shankar and trained his son in the art of sitar playing. At the age of six, Kumar gave his debut sitar performance in Pondicherry, India:

“I wouldn’t say I started my musical journey. But I started very young because I came from a family of traditional sitar players. So, we had to learn. It was just a very normal process.”

Following years of training, Kumar began to appreciate different ‘gharana styles’ (various music or styles of dance). His technical skills developed at a considerable rate. Soon he matched his father’s skills and obtained the magical touch of the sitar.

Kumar recorded his first piece alongside famous music directors Laxmikant-Pyarelal in the late 1980’s. Gaining much recognition, it became a platform for his future success.

Classical music is embedded in Kumar’s roots. Yet, he finds influence in all genres of music, old and new, East and West:

“India was just opening up, you see, we never used to get so many records from the West. I was exposed [as a teenager] to so many different sounds that intrigued and interested me. What I feel as a musician is because of the journey of what I was exposed to…Our traditional Ustad’s used to tell us, ‘Before you like a music, you should hear it thrice.’ So by the third time I used to like every kind of music.” 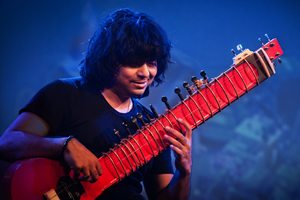 Following his classical training, Kumar desired to reach out to younger audiences, being young himself. As classical music was specific to older, wiser generations, Kumar wished to create a new type of fusion music. This new type would combine the melodious harmony and complexity of classical, but add a modern and fresher thread. Doing so, he hoped to make classical music popular among youngsters.

Hence, he revolutionised the way the sitar was played by creating his own instrument called the ‘zitar.’ The ‘zitar’ is a combination of the sitar and a guitar. Kumar decreased the number of strings from 20 to 5, similar to that of a guitar. He then added an electronic pick within the sitar body to create an authentic guitar rock sound.

Kumar released his album, Zitar, in 2008, using this new creation. Music critics responded positively and he sold millions of copies worldwide. Immediately, Kumar’s sound had a definite edge; percussion combined with electric tones blurring the boundary between classical and modern. He had essentially created a new fusion genre.

Since then, Kumar has made a name for himself in the music industry. In 2011, he collaborated with fellow fusion artist Talvin Singh and released a full album titled Together. 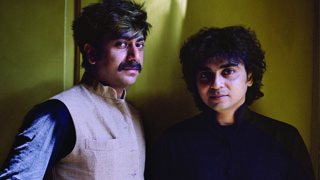 Speaking about Singh, Kumar says: “I met him at the Bath Festival in ’98, and he had blue hair. It was one of my first trips out of my country, India. I was so enchanted by that look and the way he presented himself. Since then, we’ve had so many meetings…and eventually it took us a really long time to for us to decide that we should come together, and do what we most easily can do, and that is play the music. So that’s how we got together and we did this album.”

Kumar greatly enjoys collaborating with other artists and creating fusion music. For him, it offers the freedom to explore new types of music and melody. In this way, different genres come together to complement each other. He has shared a strong chemistry with many of the artists he has collaborated with.

Kumar has performed at many prestigious festivals and concerts, both solo and together with international musicians such as Jazz guitar legend John McLaughlin.

DESIblitz met up with Niladri Kumar on his tour of the UK to find more about this unique sitar player:

Niladri also toured with child prodigy and tabla maestro, Zakir Hussain: “I can only say that I feel blessed that I am born at a time that I could see a master [Hussain], a maestro at work, at such close proximity. There have been so many master musicians from all different genres of music that we only hear about.”

Speaking about other artists he would love to work with, Kumar says: “Everybody, if I had a chance. Because I think that everybody has something to offer, and I think that I would also like to offer whatever I know to them.”

Like so many classic and traditional artists, Kumar takes inspiration from his surroundings. Everything depends on the mood, audience and ambience. Learning and playing ragas requires a journey of exploration, he believes. One that is continual and never-ending. 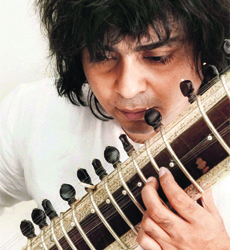 Kumar’s musical catalogue extends beyond Indian classical music, with his magical fingers making a mark in Bollywood as well. He has worked with numerous music composers such as A. R. Rahman, Vishal Bharadwaj, Anu Malik, Pritam and Shankar-Ehsan-Loy.

“I remember one music director…Ravindra Jain. We Indian musicians are not trained to read music. Ours is an oral tradition. Suddenly he [Jain] would put three pages of music in front of you, and say, ‘Okay, we have to record.’ That is challenging.

“With other music directors, it is also challenging when they give you an empty space. That is what happens with most of the music directors – you give what you think would be the best part there. That’s a different kind of challenge. Working with some of the names is not challenging. The whole process is challenging and a learning experience,” says Kumar.

Kumar has received much acclaim over the years. Most significantly, he won the prestigious Sangeet Natak Akademi Award for ‘Hindustani Instrumental Music’ in 2007. It is the highest accolade for any practising artist. He also won the MTV ‘Best Classical/Fusion Instrumental’ award for If: Magical Sounds of the Sitar in 2004.

Coming from a long linage of great sitar masters, Kumar will continue producing some electrifying music. His fusion style appeals to all generations, young and old. His genius sounds will inevitably take classical music to heights that his predecessors could never have imagined.

Arun is a creative person who lives and breathes the world of Fashion, Bollywood and Music. He enjoys spending time with family and friends and loves a bit of banter. His life motto is: "You only get out of life what you put into it."
Ash Mukherjee ~ a Dancer like No Other
Lady Indiraa ~ the Bubble Bath Diva