Talvin Singh and Niladri Kumar ‘Together’

Talvin Singh and Niladri Kumar come to Birmingham to perform live on stage at the Town Hall. Featuring tracks from their album TOGETHER, this is a show not to be missed.

"This pair are best experienced live."

Electronica and Tabla maestro Talvin Singh and Sitar virtuoso Niladri Kumar celebrate the release of their album Together with a tour of many UK cities including Birmingham, performing tracks from the album as well as other music from their previous releases.

Talvin Singh, born in East London, is seen as one of the pioneers of the Asian Underground being behind the eclectic movement of electronic and South Asian music styles fused into a defined music genre. As a Mercury Music prize winner for his album OK in 1999, Talvin has continued to wow audiences around the world with his distinct style of Tabla and fusion music. 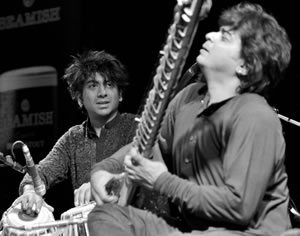 Niladri Kumar born in India, comes from a music family and was taught sitar by his father at a young age. His father Kartick Kumar, a disciple of Ravi Shankar, taught Niladri the realms of how to play sitar classically, making him a child prodigy. Niladri gave his first public performance at the age of six at Sri Aurobindo Ashram in Puducherry, India. Niladrii is well known for his creation of a unique instrument called the ‘Zitar’ which was a hybrid of an electric guitar and sitar.

Niladri’s unpredictable brilliance is rooted in ancient tradition allied to innovation and a natural charisma. His distinctive style is strongly rooted in classical musical traditions, which appeal to the orthodox as well as progressive music lovers. A rare instrumentalist equally at home playing Classical or contemporary world music, he is one of his generations brightest stars.

The album Together features ten incredible tracks featuring energetic and surreal performances from the duo. 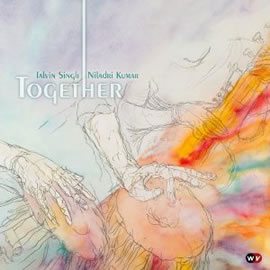 The first track ‘River’ being an up-tempo and flowing sound-scape of intricate Tabla, intrinsic Sitar and lavishly fused electronic accompaniments. ‘Pink’ the second track is a soft melodic Sitar rendition. Thirdly is the deep reflective sound of ‘Mirror’. The fourth track ‘Ananta’ has a qwwali style start with a tin-taal beat then fused with the vibes of the Sitar journeying into incredible Tabla tirkats. The title track ‘Together’ is laced with electronic sounds and combines interesting percussive beats mixed with Tabla followed by a regal sounding Sitar.

The second half of the album features ‘Jogi’ the sixth track which is a chilled traditional Indian classical sound promoting the roots of Sitar and Tabla playing. Next is ‘Play’ the shortest track on the album features Talvin on solo Tabla. The eighth track ‘The Bliss’ blossoms with echo percussions behind the deep Sitar sounds of Nildari. The longest track ‘Threads’ is a magical sounding combination of scintillating Tabla, Zitar, Sitar and electronic vibes, and this track is only available of the physical album and is not downloadble. The final track ‘Joy’ seals this feast of electronica and traditional sounds with a tremendous upbeat climax with fast Sitar riffs. 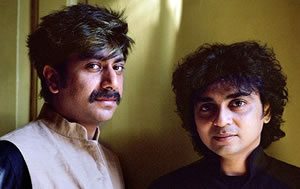 Even on paper, this combination is breathtaking, for the mind can only begin to imagine what subtle brilliance will be created by two of the most innovative musicians around live on stage. Talvin Singh, is known for his ground-breaking style in creating original sounds using Indian traditions and modern European aesthetics. He is at heart, a Tabla player who literally lives and breathes his beats. Next, is Niladri Kumar is a fifth generation Sitar player, who has a fresh, experimental approach to his instrument is sure to evoke your every emotion, and his exploratory nature will transport you to a unique, musical experience.

Robin Denselow of The Guardian wrote reviewing their performance: “This pair are best experienced live.” Their performances feature an amazing rich mix of sitar and tabla magic integrated with atmospheric background sounds from a laptop live on stage.

Talvin Singh and Niladri Kumar combine their deep rooted Indian classical training, and their modern, contemporary surroundings to create an extraordinary sound to be enjoyed both live and as a unique recording which definitely shows that Talvin and Niladri have truly come Together.

Jas likes to keep in touch with the world of music and entertainment by writing about it. He does like hitting the gym too. His motto is 'The difference between the impossible and the possible lies in a person's determination.'
Kamal Raja single NO CLUE
Everywhere+Nowhere ~ a DJ’s feat