Kamal Raja debuts with his first single NO CLUE featuring Moroccan rapper Salah Edin. Published by Bollywood-Zone and produced by Light-Enterprise, the single is the start of an incredible solo musical journey for this talented singer songwriter.

"I was waiting for the right time to become a solo artist."

Light-Enterprise and Bollywood-Zone proudly presents Kamal Raja’s debut single NO CLUE which is a song that perfectly combines the Pop/R&B with Desi touch in the most natural way.

Together with Kamal’s smooth vocals, Moroccan rapper Salah Edin, completes the track with his Arabic flow. Salah Edin is known for numerous hit tracks and featured songs with artists such as Wu-Tang Clan, Outlandish, Sefyu and Bishop Lamont.

Kamal Raja was born in Amsterdam, to a Pakistani father and a Mongolian mother. Since his childhood he knew what he wanted to be: Famous! At the age of 12, Kamal did his very first audition as a dancer in which he did all kinds of stage performances. At 13, he loved playing guitar and making songs. His willpower and ambition continued to grow and he knew he could do more than just dance. He was discovered by an agency that gave him a star in musicals. By doing a lot of international musicals he acquired the confidence to sing. 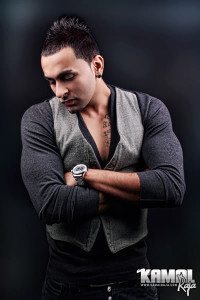 Music was always present in Kamal’s life, he continued to practice every day after work. Inspired greatly by Western music he progressively shaped his way of making music until he was in a position to follow his dream: Dream as if you have forever, and live as if you have only today.

Without any musical background he decided to do demos and recorded a few tracks. With his first demo CD he met a with some record labels in Belgium and Germany. On 1 January 2010 he released in collaboration with Jasz Gill his very first international single “Like A Star”, the music of which was produced by CJ Records, it achieved sufficient initial curiosity in the United Kingdom so that he followed it up with another single “Teri Chaal” by then he knew that his international breakthrough was not very far!

Kamal has now gone solo with his first debut single NO CLUE released worldwide as of 8th of April 2011 (including United Kingdom). Together with the creative company Light-Enterprise and support from Bollywood Zone, this upcoming talent will be destined to produce something special.

When asked about his transition to a solo artist Kamal says: “I was waiting for the right time to become a solo artist. And I think the best time is right now.”

We caught up with Kamal Raja on his promotion tour of NO CLUE in the UK and present an exclusive interview with the artist to talk about his music, ambitions and life.

NO CLUE has been musically produced by CJ Records and mixed and mastered by Eastar Music. It has hit the streets, clubs and the charts with a massive buzz with a fantastically shot promotional video for the track which was directed by Tahir Mohamed of Light-Creation and released by publisher Bollywood-Zone.

Kamal Raja an Urban/Desi singer and songwriter, is a new talent that further wants enhance the reputation of the R&B/Pop/Desi music throughout the whole world as musically aspiring, forward-looking and ambitious with his own style.

The sensual and intimate aspect of the NO CLUE video was interesting to watch and when asked about how it was for Kamal says: “I’m professional and this is mature track. Sensuality happens in normal life, it’s reality. Even if I’m kissing a girl in a video, it’s not I’m kissing the girl but it’s part of the story.”

The choice of popular rapper Salah Edin on the song was a distinct one. Kaml says: “The way he raps in Arabic (Moroccan) flow suits the song. You can feel the song. Even you don’t know what he says but the way he says it you know what he is talking about.”

Kamal Raja is a confident and happy go-lucky guy and lives by the motto:

“Dream as you have forever and live as if you only have today.”

When asked about his future plans, Kamal replied: “I don’t know what is coming in the future. At this moment I am focusing on my path and my path is to bring my solo album out, reach the people I want to reach and achieve things that I want to do with my tracks.”

The single NO CLUE is available for download from all reputable music download sites including iTunes. The CD for the single is be available on kamalrajamusic.com.

For more news and the latest about singing sensation Kamal Raja visit: kamalrajamusic.com.

Thanks to Bollywood-Zone. Thanks to Akbar's (Birmingham).