Kama Raja the zesty artist from Holland brings us “UFFF” his latest single which is oozes of the romance of Paris, catchy Punjabi lyrics and the hard edge beats of Euro dance in an exciting sound for all to go ‘UFFF!”

"Sometimes I did had an Ufff moment when I was close to the girl!"

Kamal Raja the sensational Dutch artist from Holland releases his second single, which is “UFFF” as the title implies! After winning over audience hearts with his first single, No Clue, a true worldwide smash hit, the talented singer is back with a fresh new sound in his scintillating single called “UFFF” but what is lurking behind this puzzling title?

Kamal told DESIblitz exclusively what was behind “UFFF” the title. “Ufff is a word what I do used a lot when I was in England. Everything I say is related to Ufff! My friends know that aswell and because of me they use it too… You see a nice girl.. Ufff! Your’e in a happy mood…Ufff! Your’e in love? Ufff! When you see something ugly? Ufff!” said the stylistic artist.

In this single, glamour and sophistication meet with sensuality and romance. Duality is everywhere: in Kamal Raja’s voice, in the music beat, in the body language, in the dress code, in the choice of the setting, the list goes on!

The frantic music pace of ‘Ufff Ufff Tere Nakhre Maar Gaye’ swirls with gorgeous visuals of Paris in the music video and leads the viewer to the most prestigious and famous places of this highly-glamorous and romantic city such as Place Vendôme, the Eiffel Tower, Place de la Concorde and Montmartre and reaches its apex with the final scene which takes place, in a typical Parisian houseboat, anchored in the well-known French River: the Seine.

“UFFF” is a breathtaking whirlwind of sound and beat that sweeps along everything on its way. Kamal Says:

“UFFF is a part of everything and that’s why I always say it. So it was obvious I had to do something special with it!”

The music video of “UFFF” was released and produced by BOLLYWOOD ZONE, and here it is for you to enjoy: 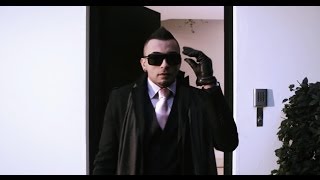 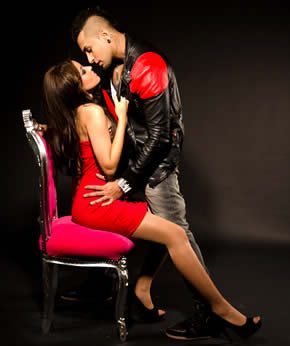 Dong the video was a blast for the artist and when asked of how it felt being in Paris shooting his video to the song, he said: ” I really enjoyed the whole video shoot. It was a crew of 300 people and we all got along really well with each other and a few of them were French artists who helped me a lot. Everyone did a great job. On the sets when we were filming inside the cruise ship that was a good time as everyone was enjoying themselves sometimes more and working less!”

The video has some hot scenes with his lady lead in the video. Talking about the scenes cunningly Kamal told DESIblitz: “Sometimes I did had an Ufff moment when I was close to the girl! But I take my work seriously so it really didn’t bother me at that time but when I look back then I think wowwww I didn’t know the scenes were so hot! Hahahah!” 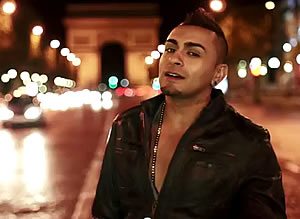 When asked about the stunts, especially at the Champs-Élysées, Kamal said: “When I was standing in the middle of Champs Elysees that was very dangerous! I had to watch out and be careful because the cars were coming from left right and centre! And sometimes I could feel the side mirror just touching my elbow! There were police and ambulance present at that time and that says enough! Do I like doing my own stunts? Yes of course!”

Kamal Raja’s talent and highly-colorful personality come alive through all of the elements in the song and video and depict the world of perfection to which he aspires. “UFFF” is a true aesthetic work with a high-captivating and rhythmic music that there’s no choice left but to dance!

What makes Kamal Raja unique is the combination of his Desi touch, pop and R&B and sexy metro urban style all of which gives him a highly-sophisticated and glamorous aura while being very natural. Kamal Raja gives a positive image of a Desi man born in the Netherlands and whose success is greatly due to hard work and dedication.

“UFFF” confirms Kamal Raja’s reputation as a great ground-breaking artist. This single is the fruit of years of hard work and it is just a step towards something bigger. He says: “I believe that we get to certain levels in our lives and by every level we just relish its point of change. I’m now at the stage where I think on a different level. Who knows what my next level will be? Or what my style will be.”

Future projects are upcoming and no doubt they will be rocking, the same way Kamal Raja likes to rock his challenging journey of music and life!

As part of the senior DESIblitz team, Indi is responsible for management and advertising. He especially loves producing stories with special video and photography features. His life motto is 'no pain, no gain...'
YouTube Gold Award for Kolaveri Di
Garry Sandhu gets Deported to India