CJ, Jasz Gill and Kamal Raja of CJ Records from Holland are out to show their talent by mixing up Euro-Urban sounds with Desi lyrics to make music with a difference.

The people in Holland like Punjabi music a lot

Chevy known as ‘CJ’, Jasz Gill and Kamal Raja are making fantastic musical impact with their debut single, ‘Like A Star.’ The young trio from Holland show that Desi music is alive and kicking in mainland Europe too! Collectively known as CJK, they come under the banner of ‘CJ Records‘ which was established 2005.

Chevy is the music producer, who is inspired by his father Kamaljeet Singh, has focused on making a Euro blend of electronic based music fused with catchy Punjabi and English lyrics. His younger brother, Jasz Gill is the baby of the team but by no means without ambition, already he shows signs of being a tremendous singer. The eldest of the trio, Kamal Raja, joined them in 2008, after impressing them with a birthday party vocal performance! Jasz and Kamal are both the singers and writers of the songs. 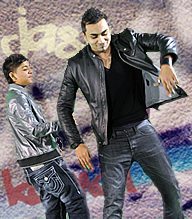 They are all based in Amsterdam, Holland, where Chevy runs his own music studio. Kamal has been involved in music for over 15 years. Jasz who is the younger brother of Chevy has been singing from a very young age, also greatly inspired by his father.

“I want to make a new Desi style of music with House, Techno, Trance, Reggaton or Urban Hip Hop but in Punjabi”

Inspired by producers like Rishi Rich in the UK, he still wants to make his own mark by producing a new Urban sound, using new beats and electronic sounds.

Jasz Gill who has a great command of Punjabi at a young age is multi-talented. As well as singing, he plays many instruments including keyboards, harmonium, tabla and dholak. He also trains in Indian classical music. He passionately says,

“Music is just my life, I love music.”

“It’s a mix, it’s urban but my roots are from Pakistan so I like Punjabi and Urdu also.”

DESIblitz wanted to know lots more about this emerging talent from Holland, who are showing signs of musical stardom. So, we met up with all three of them for an exclusive interview. And of course, we wanted to know more about each of them as individuals too! Watch the exclusive interview of CJ, Jasz Gill and Kamal Raja and find out what this Desi Dutch musical trio are all about!

All three of them are very fluent in Dutch and seeing them combine it with Punjabi and English in their language was amazing. We can say that when they spoke amongst each other it did sound like ‘Double Dutch’ to us but very impressive! 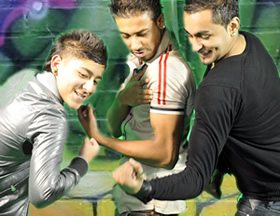 CJK are producing an album of eight songs which will be called, ‘Be a Witness’ and ‘Like a Star’ is the first single. The tracks involve a lot of time, effort and creativity to ensure they get the music and lyrics binding into that unique Euro-Urban sound produced by Chevy, who is passionate about bringing Desi music to the forefront in Holland.

Although the Desi music scene is not like the UK in Holland yet, CJ says, “The people in Holland like Punjabi music. They like the culture and appreciate it very much.”

Chevy does not want to work with lots of artists and is focused on working with Jasz Gill and Kamal Raja, to produce original music and songs with an Urban Desi mix. He says, “The ideas of Kamal Raja and Jasz Gill makes me also come up with ideas.”

The trio are not just a studio based band, as with many acts nowadays. They firmly believe in stage and live appearances and will be touring Holland, for example, with performances at The Hague, Rotterdam and Utrecht. In the UK, you will see CJK in London, Birmingham and Leicester at many forthcoming gigs and also around the country.