Producer, Composer and famous Tabla player Talvin Singh made his mark on the music industry from East to West from simple beginnings to huge fame.

Talvin Singh is one of the UK’s most innovative musicians who has transformed the sound and image of Indian classical genre. Working as a producer, composer and most notably a tabla player he has taken his career to new heights. This includes creating his own musical genre ‘Asian Underground,’ working with Madonna and Björk and inventing his own musical instrument.

Talvin was born in 1970 in Leytonstone, East London, to ethnic Indian parents who had fled Idi Amin’s Uganda in the 1960’s. As a young child, he had a keen interest to learn music. At the age of fifteen he went to India to study Indian classical music for two years under his master, Pandit Lashman Singh.

In India, he developed his art of playing the tabla. Talking of his teacher Talvin says: “My teacher who has been teaching me how to play the tabla since I was fifteen and is still teaching me today.” 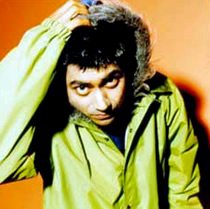 Upon his return to the UK, Talvin approached several classical Indian composers and producers to create music with him but was snubbed. So, he went on to develop his own persona as a musician.

During the 1980’s, Talvin was seen performing on stage as part of the hugely popular Bhangra band Alaap. He was one of the percussionists donning a ponytail, who played Tabla, Congas and other rhythmic instruments; making the band one of the most finest on the live circuit during that era.

Talvin subsequently left Alaap and decided to pursue his personal and individual style of music by blending his own eastern rhythms and a fusion of electronic sounds. He needed a studio space and he was invited me to an old brewery, called the Truman Brewery in the East London. This became his musical home and the place became a hub for creative people, including musicians, artists, writers and independent record labels.

His musical creations included a mix of classical influences from the late Ravi Shankar to the Hip Hop beats of Run-D.M.C; here he created his own sub-genre of music titled ‘Asian Underground or Indian Electronica.’ Asian Underground created a massive buzz throughout the British music scene. 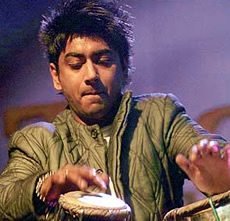 In an interview on the programme Art Talk Talvin said: “I wanted to be myself, I didn’t have the classic style, I had blue hair and didn’t wear Kurtas.”

Talvin Singh shot to fame by collaborating with popular UK rock band Siouxsie and the Banshees where he added the sounds of Asia to the rock scene. The song titled ‘Kiss Them for Me’ peaked at number twenty-three on the Billboard Hot 100.

Talvin and the English rock band successfully toured around the country. His most notable achievement with the band was headlining their second tour at the Lollapalooza Festival – an annual musical festival that has recently been revived after being cancelled in the late 1990s.

After working with the band, Talvin Singh decided to spread his wings and pursue his solo career. Working with Siouxsie and the Banshees allowed more opportunities to collaborate with the best of the best within the music industry.

Talvin revealed his favourite music composers on the Indian television show Art Talk. He said: “I like to work with musicians like Björk who go against the norm.”

In 1993, Talvin collaborated with Icelandic singer Björk on her ‘Debut’ [1993] album. His hugely successful partnership with Björk, paved the way for future collaborations with other mainstream artists. Artists as huge as Madonna and Blondie have all collaborated with Talvin Singh. 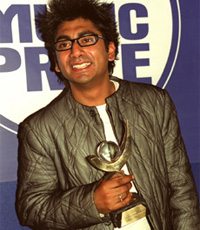 Talvin worked with Madonna on more than one occasion; firstly on the remixes of her hit singles ‘Don’t Tell Me’ [2000] and ‘Nothing Really Matters’ [1998]. Secondly he worked alongside her to produce the single ‘Cyber-Raga’ [2000].

After signing with Island Records, Talvin won the prestigious Mercury Prize for his solo album titled ‘OK’ [1999]. A huge achievement for an Asian musician at that time. For this distinguished prize he was competing against the best artists of that time including Faithless, Blur and the Chemical Brothers.

His album ‘OK’ was inspired by his own musical style and was influenced from Indian classical music, Jazz and Hip Hop. His biggest hit single includes ‘Jaan,’ which sampled sounds from electronic and classical Indian sounds. 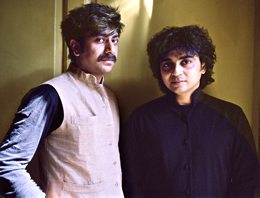 The majority of Talvin Singh’s work has focused on the Western market, however throughout his career he hasn’t forgotten his roots. He had collaborated with world famous Qawwal Nusrat Fateh Ali Khan [late] on the album ‘Star Rise.’ [1997].

In 2011, Talvin Singh joined forces with fusion musician Niladri Kumar on the album ‘Together’ [2011] and went on a tour of the UK. This is when DESIblitz.com had the pleasure of catching up with this unique and very talented musician and had a chat with him about his music and life:

Playing live, Talvin Singh utilises the intricate rhythms of his tabla and fuses them with the electronic sounds that beam out of his Apple MAC. During his performances, tabla solos are an amazing feat to listen to and watch. In a humble manner, he talks of his solos and says: “The tabla solo is… it’s a cake that I’m always trying to bake. Obviously there’s a repertoire for tabla, compositions that are passed down from generation to generation and some happen to have come my way through my master, but not many.”

His musical work extends beyond the world of composing and producing. You could say Talvin Singh is an inventor. Speaking on the Indian channel ‘NewsX,’ he briefly talked about his creation titled, ‘Tablatronic.’ He described this as an electronic tabla, which enables him to execute his own unique brand of hybrid music. 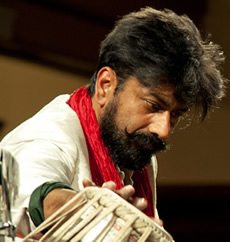 In 2010, Talvin Singh accepted his ‘Commitment to Scene’ award at the UK Asian Music Awards. Reflecting on his musical career, Talvin explains how it feels to have achieved so much over the years.

“With me being of Asian origin, a minority, but becoming a celebrity has made me feel proud as I have overcome the struggle of my forefathers,” said Talvin.

In appearance, Talvin has always had a sense of individuality, especially when it comes to his hair styles through the years, from pony tails to blue scrunchy hair and to the more regal look with a moustache, beard and funky hair. Perhaps seen as another means of him expressing his creativity.

Outside the world of music Talvin Singh lives a very simplistic life; he enjoys gardening and finds it’s very therapeutic. But it seems music will always be a love and passion of his and he will continue to evolve his musical style over the coming years.

Arun is a creative person who lives and breathes the world of Fashion, Bollywood and Music. He enjoys spending time with family and friends and loves a bit of banter. His life motto is: "You only get out of life what you put into it."
One Pound Fish Song removed from Chart
Priyanka releases video for In My City