With the exceptional singing talent in Pakistan, DESIblitz rounds up the top 15 musical icons of Pakistan who have shaped the industry with their voices.

Madam Noor Jahan, the musical icon of Pakistan, with glamour.

The musical icons of Pakistan, have proved their capabilities of an extraordinary variety of singing expressions.

Pakistan is full of rich culture, infused with the heritage of various people, shaping a musical spectrum with diverse sounds.

Spanning from rural folk music to contemporary rock, singers and musicians in the country dabble and dominate every genre that the audience wants to hear.

DESIblitz highlights 15 musical icons of Pakistan, who have shaped the music industry due to their talent and innovation. 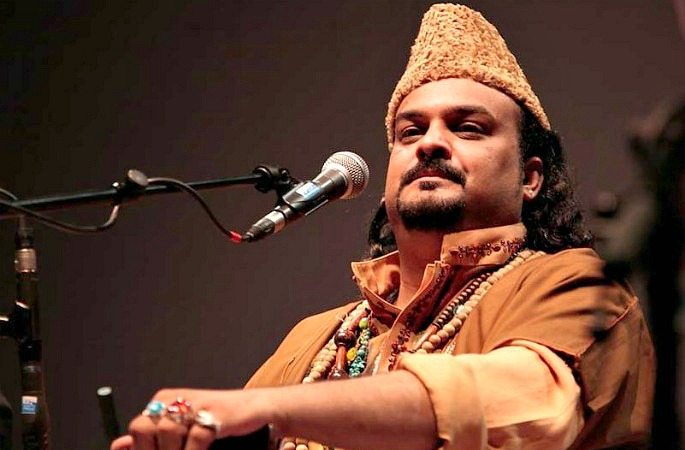 The late Amjad Sabri, who was sadly assassinated, has been regarded as one of the biggest losses to Pakistan’s music industry.

This incredibly talented individual undeniably made his mark across the globe. Certainly, his classic music will continue to be an influence on generations to come.

Son of Ghulam Farid Sabri, who was a member of the Sabri Brothers,  meant that Amjad was destined to follow in the footsteps of his musical family. 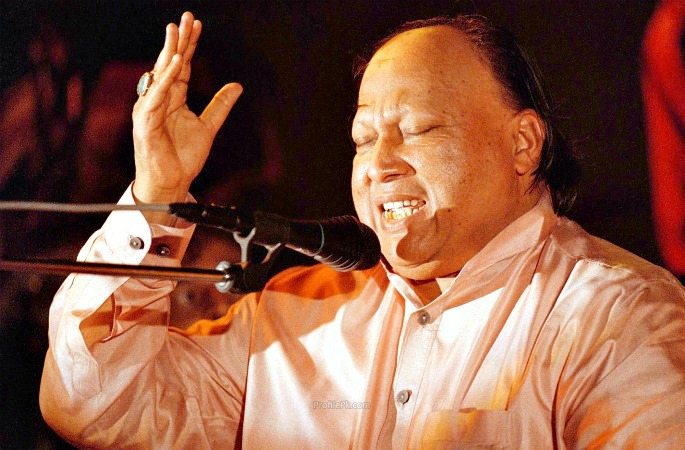 He was one of the first people to introduce Qawwali to the wider world.

Accordingly, his powerhouse lungs and melodious voice, combined together, gave him his distinct expressive sound. 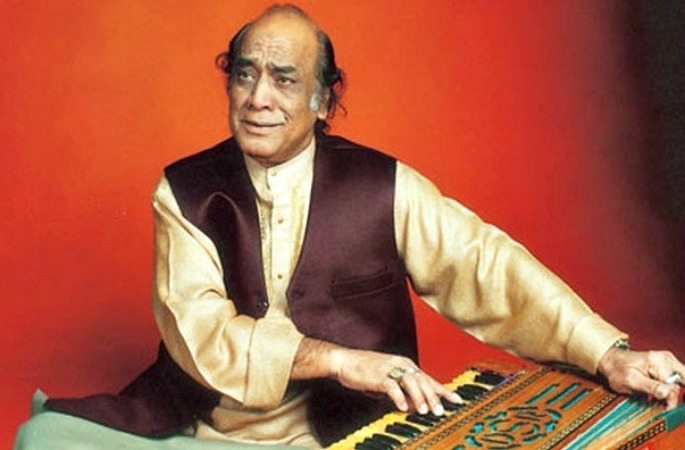 One of the most classical musical icons of Pakistan, Mehdi Hassan.

He was regarded as one of Pakistan’s most respected singers. Significantly, his soft voice perfectly paired up with his harmonium and tabla.

This late singer’s music still plays today. And is often the inspiration for many young singers who are passionate about classical music.

His most popular songs include ‘Ranjish Hi Sahi’ and ‘Mujhe Tum Nazar Se’. 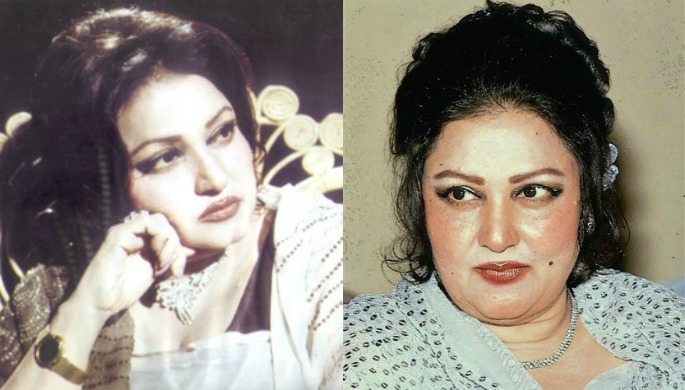 Madam Noor Jahan, the musical icon of Pakistan, with glamour. Not just known for her musical talent, she was admired for her beauty and unique fashion sense.

Often draped in a silk saree and signature makeup look, she made sure her appearance matched her voice.

Singing in numerous Pakistani films and her own independent music, Madam Noor Jahan has attained a legendary status in Pakistan. 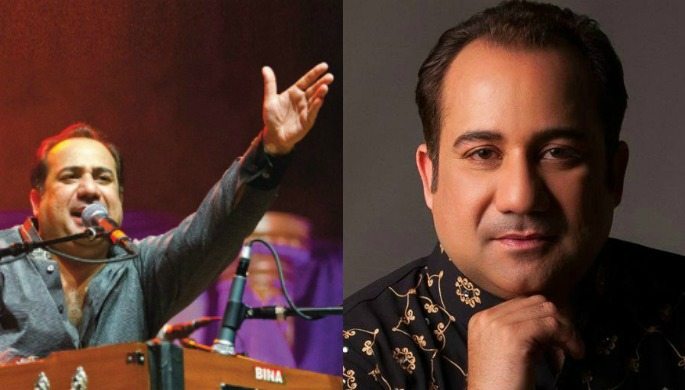 Following in Ustad Nusrat Fateh Ali Khans footsteps, it’s no surprise that Rahat has made it to the list of top musical icons of Pakistan.

His powerful voice and his charming tone have made him a favourite in both Pakistan and India.

Belting out some of his own hits such as ‘Main Tenu Samjhawan Ki’, he has further gained international stardom. After singing smash hit songs in Bollywood such as ‘Teri Ore’, ‘Teri Meri’ and ‘Jiya Dhadak Dhadak’ to name a few, he has won the hearts of listeners worldwide. 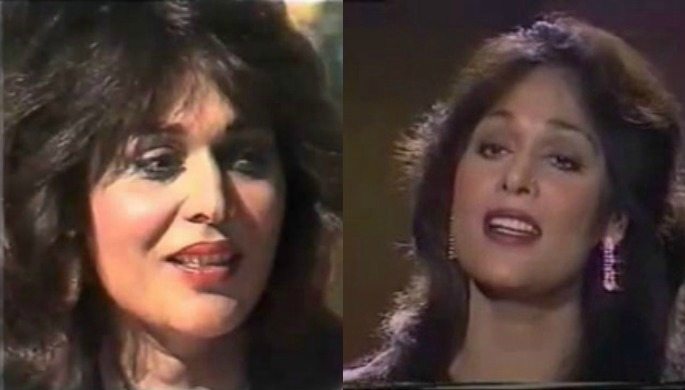 If you are singing dholak songs at a wedding, most probably they will be one of Mussarat Nazir’s masterpieces.

Whether it’s ‘Chitta Kukkad’ or ‘Mera Laung Gawacha’, her songs have lasted the test of time and are still sung by the youth today.

Her fun playful songs and her roles in Pakistani films have made her a respected artist within Pakistan.

We are sure her songs will continue to be wedding favourites for years to come. 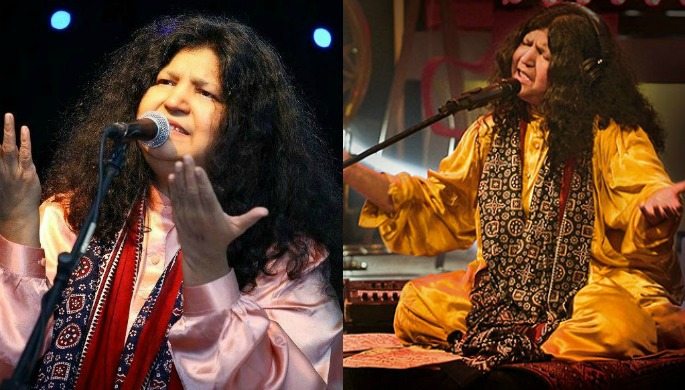 Often dubbed as the Queen of Sufi by her followers, Abida enjoys her fantastic career. Due to her passion for Sufi music.

With her deep and strong voice, Abida sustains a unique female voice amongst her contemporaries.

Rather than styling herself like many other famous female singers, she always opts for a simple look and instead focuses on her music.

Immersing herself into her trance-like music, Abida belts out powerhouse performances of songs such as ‘Tere Ishq Nachaya’ and ‘Maula-E-Qul’. 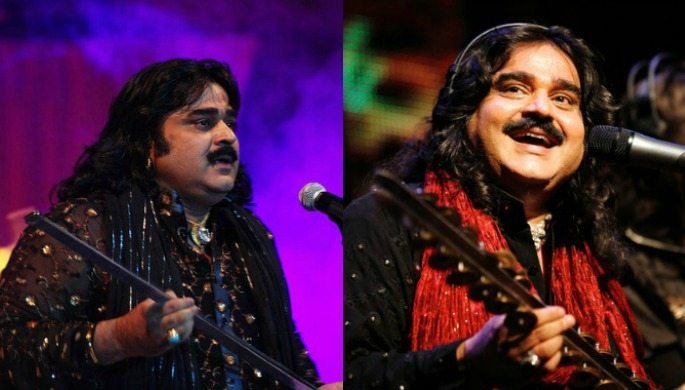 Lively and eccentric folk singer, Arif Lohar, is often seen with a smile on his face and a chimta in his hand.

Some of his most popular performances include the renowned track ‘Jugni’ and ‘Dil Tere Ishq Da’. 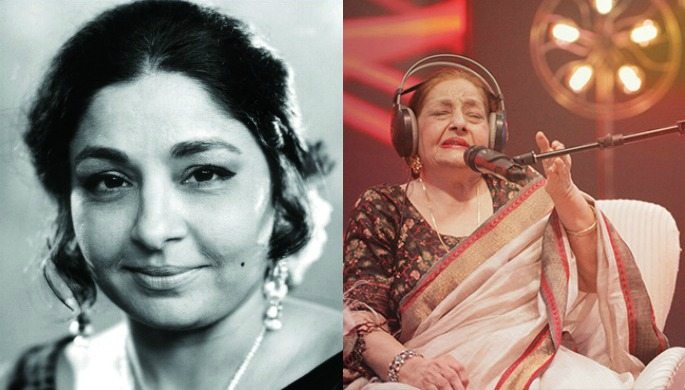 Regarded as the Malika-E-Ghazal, Farida ruled classical music in Pakistan, because of her sheer talent and popularity.

The beauty with talent gained a lot of attention in both India and Pakistan.

Recently, she made a wonderful appearance and sang this song on Coke Studio, season 8. 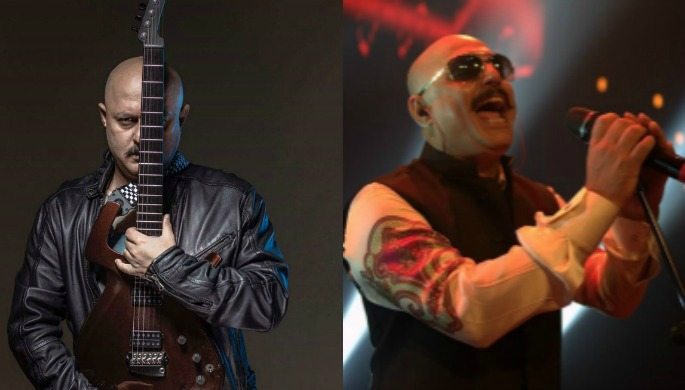 Ali Azmat also makes an appearance on the DESIblitz list of top 15 musical icons of Pakistan. Simply because he is an artist who has incorporated western influences of rock and infused it with Pakistan’s pop scene.

He began making waves in the music industry when he was the lead vocalist in ‘Junoon,’ one of Pakistans most famous bands in the ’90s.

Creating rock anthems often called ‘sufi rock’, was the genre that created some of their biggest hits. These included, ‘Sayonee’ and ‘Jazba E Junoon,’ that are still played today. 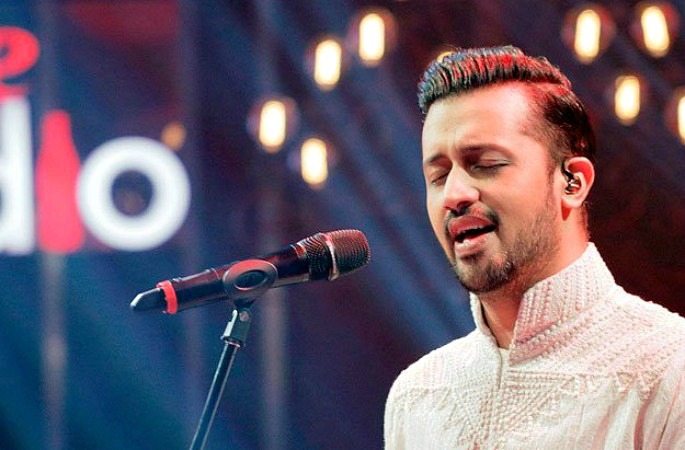 Atif Aslam, the stylish musical icon of Pakistan, with a rather distinct voice.

Carrying his symbolic guitar, he has been instrumental in bringing Pakistan to an international level.

Surely, he will continue to encourage and mesmerise the youth of today. 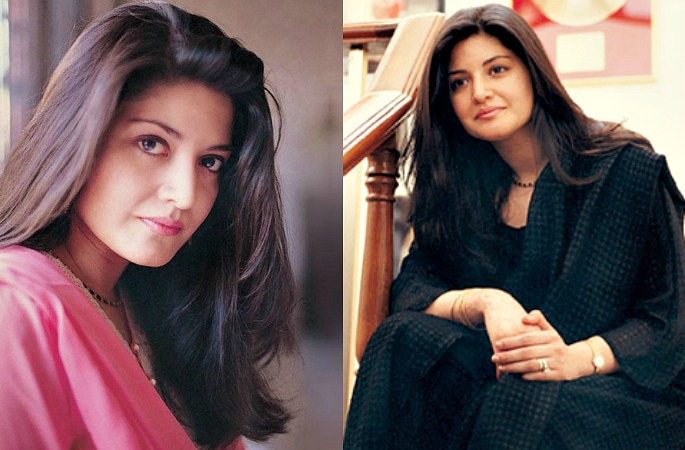 Pop singer Nazia Hassan was not only a versatile musical icon of Pakistan but, was also glamorised for her style and beauty.

With her disco beat in ‘Aap Jaisa Koi,’ waves were created across the South Asian subcontinent, earning her prestigious awards.

Her tragic death due to cancer touched the hearts of millions. And, no doubt, she will always remain alive in the heart of her nation. As such, her songs are still played to this date. 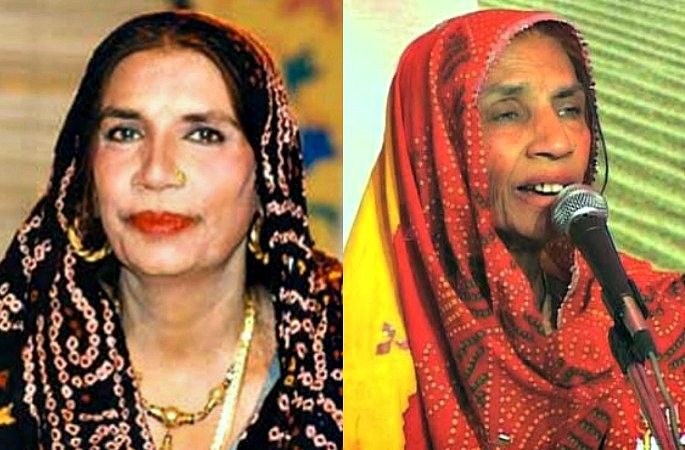 Reshma, the legendary musical icon of Pakistan, gained fame with her ‘Lambhi Judaai.’

With a voice that comes from the heart, she was famous for her folk themed songs.

Inspired by mystic singing, Reshma is still recognised for her traditional Punjabi voice. 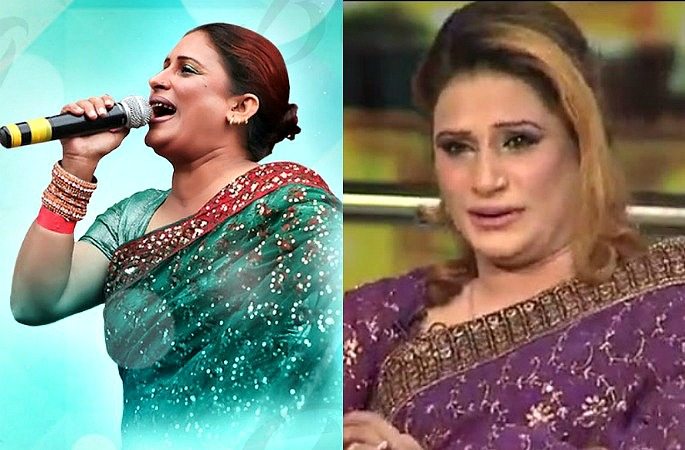 With her strong Punjabi accent, she has succeeded in establishing a name on the screens of Punjabi cinema.

From ‘Kaddi Te Hans Bol Wey’ to ‘Vichran Vichran Karda’, she is going strong through the musical industry. 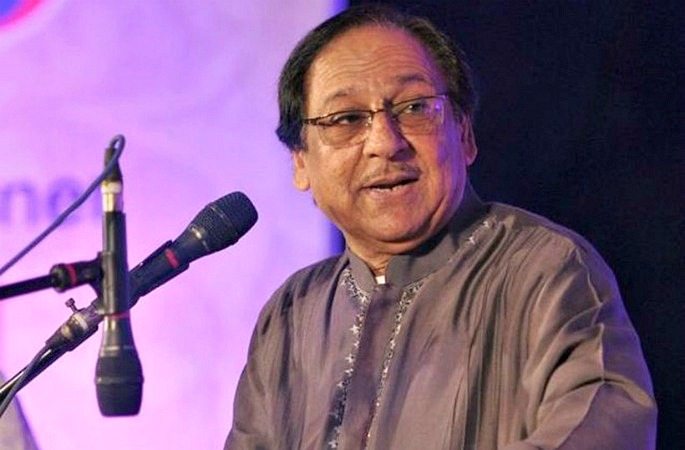 The traditional ghazal identity of Pakistan, Ghulam Ali, has been singing as a way to remember his father, Bade Ghulam Ali Khan Saab.

With his classics like ‘Gori Tere Naina,’ Ghulam Ali continues to sing in his sweet and gentle style, combined with the harmonium and tabla.

These musical icons of Pakistan have held a world recording talent. As such, it’s impossible to have missed the music these icons have produced over the years.

Spanning from classical ghazals and qawwalis to contemporary rock and pop, these Pakistani artists have explored and experimented in every genre.

As a result, they shine through the crowd, impacting and influencing Pakistan’s current music industry.

Momena is a Politics and International Relations student who loves music, reading and art. She enjoys travelling, spending time with her family and all things Bollywood! Her motto is: “Life is better when you're laughing.”
10 Best 2000s Bollywood Love Songs
Actress Deana Uppal debuts as Music Video Director