America and India host two of the world’s giant film industries. We showcase some Bollywood stars who were influenced by Hollywood icons.

Hollywood icons have had a big influence on Bollywood stars over the years.

Both industries shared a ‘Golden Era’ in the 50s and 60s. Stars had a big following, with movies hitting right chords at the box office.

While both industries are strong in their own right, Hollywood shone first. Hollywood’s first film was a short feature, In Old California (1910).

Meanwhile, Bollywood rose to prominence in 1913. India’s silent era also lasted longer than that of the west.

So, with Hollywood ahead of them, it is only natural that Bollywood stars became influenced by American faces.

DESIblitz presents 7 Bollywood stars who are influenced by Hollywood. 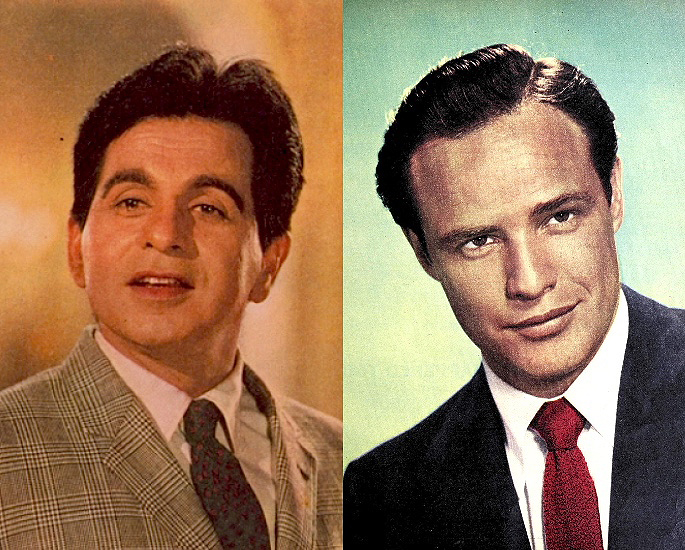 Dilip Kumar began his career in 1944. Since then, he has been termed as a Bollywood actor who pioneered realism and method acting in Indian cinema.

An actor in Hollywood also holds this credit. His name was Marlon Brando.

Marlon who is a junior to Dilip Kumar made his film debut six years after the Bollywood legend.

Nevertheless, it was Marlon who made an instant impression on Dilip Sahab.

In 2010, The Hindu presented an interview with the Indian legend.

Commenting on his favourite actors and directors, Dilip Sahab mentioned Marlon as an artist whom he admired.

“He is the marker. There’s ‘before Brando’ and ‘after Brando’.”

Similarly, in a conversation with Faridoon Sharyar from Bollywood Hungama, Amitabh Bachchan said:

“Whenever the history of Indian cinema will be written, it will always have ‘before Dilip Kumar and after Dilip Kumar’.”

The similarities between them and the adulation of both stars are phenomenal.

Both the stars have achieved great legacies.

Madhubala is amongst the most influential Bollywood stars. She was famous for her acting talent.

In Hollywood, Marilyn Monroe also achieved dizzying heights of fame in the 50s and 60s. This was around the same time as Madhubala.

Marilyn and Madhubala were famous for their beauty in their respective regions.

One can easily see that the two shared similar facial characteristics.

“She has been compared to Marilyn Monroe, the smoldering looks, the short career, the tragic end.”

Aisha also reveals behaviour traits that the two actors had in common.

She mentions “the same abandon to their laughter” and their “head thrown back.”

Madhubala and Marilyn also had a similar tone while they spoke. In August 1962, Marilyn gave her final interview to ‘Life’ magazine.

She speaks in an elegant, soft-spoken voice. An alike quality is noticeable in Madhubala in films such as Chalti Ka Naam Gaadi (1958) and Mughal-E-Azam (1960).

According to NDTV, Madhubala herself took inspiration from Hollywood.

She learned to speak English while watching American films.

Both Marilyn and Madhubala had sad ends to their lives. They both were unlucky in love.

While Marylin overdosed, Madhubala suffered from a fatal heart condition. Both were 36 when they died.

But even though they sadly left this world young, both leave behind iconic work, which many will always remember.

Perhaps that is their biggest similarity.

Termed as the ‘showman’ of Indian cinema, Raj Kapoor was a leading actor from the 40s to the 60s.

Sir Charlie Chaplin amongst the most influential stars of world cinema.

He achieved fame in Hollywood’s silent era from the early 20s to the late 30s.

This dress sense is identical to Sir Charlie. Raj Sahab became famous for comic acting and timing. Comedy remains the genre that the Hollywood legend is still known for.

Dev Anand was Raj Sahab’s contemporary. In his autobiography, Romancing with Life (2007), he reminisces about when he and Raj Sahab met Charlie in Switzerland:

He had consciously or subconsciously been following Chaplin’s style as an actor.”

This shows the influence that the tramp of America’s big-screen had on Raj Sahab.

Shashi Ji was asked about Raj Sahab’s penchant for making films, concerning the underprivileged. In response, he said:

Raj Sahab was one of the most iconic Bollywood stars. He was also known as ‘India’s Charlie Chaplin.’

All these facts explain why and how.

When one ranks evergreen Bollywood stars, Dev Anand is high up there.

He was widely termed as ‘The Gregory Peck of India.’ This was in part due to the facial characteristics and the debonair appearances both the actors had in common.

Both enjoyed success in the 50s and 60s.

They were also both known for their hairstyles, which became a rage and influenced thousands of movie-goers.

As Gregory was the senior star, fans in India often comment that Dev Sahab modelled himself on his style.

In the 40s and 50s, Dev Sahab had a relationship with the Indian actress, Suraiya.

She was a self-confessed fan of Gregory. Dev Sahab often imitated Gregory to impress her.

However, when he was referred to as the Indian version of the Hollywood star, the Bollywood romantic openly voiced his displeasure.

But that doe not mean that he wasn’t influenced by the American legend.

In an 80s interview on YouTube with ‘WildfilmsIndia.com’, Dev Sahab discussed his comparisons with Gregory:

“I don’t want to be called as someone else. I think, in the early stages, everybody has an idol.

“But when a little maturity comes into your personality, you start getting over it.”

Dev Sahab and Gregory also met several times. The former was bowled over. This shows that legends can be influenced by other icons.

The audience sees Shammi Kapoor hanging from a helicopter in ‘Aasman Se Aaya Farishta’ from An Evening in Paris (1967).

They also enjoy him dancing robotically in ‘Aaja Aaja’ from Teesri Manzil (1966). He remains one of the most popular Bollywood stars.

Shammi Sahab was a true dancer, long before Hrithik Roshan or Ranveer Singh made their marks on the floor.

Another entertainer hailed from the glamour of Hollywood – His name is Elvis Presley. He is widely known as ‘The King of Rock and Roll.’

Shammi Ji started achieving prominence in the late 50s. He became a leading star in the 60s.

The Bollywood star and Elvis were both cultural figures.

Although Shammi Sahab was older than Elvis, the latter achieved fame a few years before him in 1953.

Shammi Kapoor was known as ‘India’s Elvis Presley’ and with good reason.

Elvis was known for his spontaneous dancing. This was seen in Jailhouse Rock (1957).

In 2012, Bhaichand Patel edited and published a book called Icons of Bollywood.

Within this book, film critic Nasreen Munni Kabir writes a section on Shammi. She divulges the impact Elvis had on Shammi Ji:

Nasreen added that this was “especially evident when performing songs.”

He was asked if he had dedicated any dances to his great-uncle Shammi. Ranbir replied:

“If you watch Shammi Kapoor Ji’s songs closely, he wasn’t a trained dancer.”

“I’ve actually heard stories from my father that there was hardly a choreographer on sets.”

Both Shammi Sahab and Elvis were not only great stars but also infectious with their dancing. 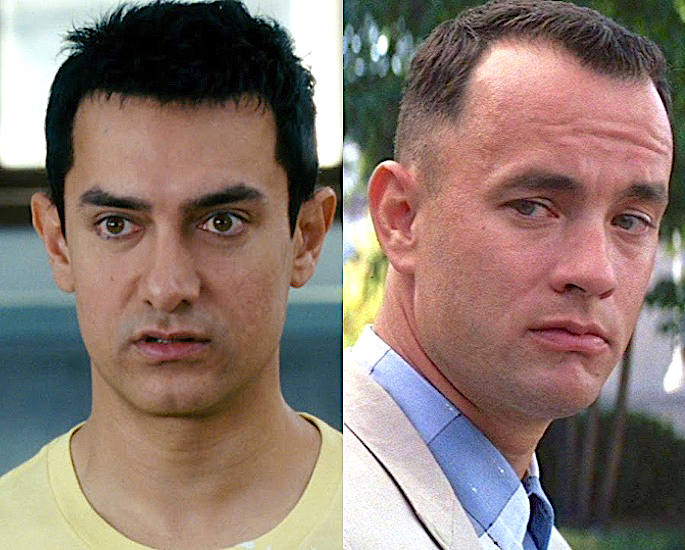 Aamir Khan is famous as ‘Mr Perfectionist’ in India. He is one of the most respected Bollywood stars.

On the other hand, Tom Hanks is a leading actor in Hollywood.

Both are award-winning legends. Their dedication to their craft shows in their films.

Aamir and Tom have had successful careers in the 90s and are still going strong.

While praising Aamir’s performance in Dangal (2016), Raveena made parallels between Aamir and Tom:

“I call Aamir the ‘Tom Hanks of India.’ Every film he comes up with, he always reminds me of Tom Hanks.”

British actor Paul Blackthorne, who co-starred with Aamir in Lagaan (2001) has a similar view. In a 2011 ’24 Inside’ interview, Paul said:

“I did an Indian film with a fellow called Aamir Khan. He’s like India’s Tom Hanks.”

Tom was appreciated for changing his accent in Forrest Gump (1994). In 1995, he won an Academy Award for his performance.

Aamir has also mastered different dialects in films, including Rangeela (1995), Lagaan and Dangal.

An influence that Tom has on Aamir is evident. Aamir’s upcoming film is Laal Singh Chaddha. It releases during Christmas 2021.

The film is a remake of Forrest Gump.

Shah Rukh Khan and Tom Cruise both tasted success in the 90s.

While Shah Rukh excelled as a romantic hero, Tom was superb in action as well as romance.

During the casting of Dilwale Dulhania Le Jayenge (1995), Aditya Chopra wanted to sign Tom for the lead role.

However, eventually, Shah Rukh was cast.

On April 20, 2020, when a fan lamented that Bollywood was incomplete without him, Shah Rukh replied:

“Yeah, I remember Tom Cruise saying the same…’you complete me.'”

A story arose that Indian fans are paid to applaud Tom at an event because they don’t know about him.

Shah Rukh was questioned about this. In a 2011 interview with Ahlan, Shah Rukh says:

“Not only does it reflect poorly that we don’t know the superstardom and greatness of Tom Cruise as a commercial actor, it also shows that India is not with it.”

This was in response to a story generated in the press. Though, it is important to note that Shah Rukh uses the word ‘greatness’ to describe Tom.

According to The Indian Express, Shah Rukh was asked about acting in Hollywood. To that, the actor replies:

“I’d like Tom Cruise to say one day ‘I’ve been given a chance in a Hindi film’.”

It certainly shows that Shah Rukh is impressed with the star.

There’s no doubt that Hollywood and Bollywood have their own strengths. They have both made indelible marks in history.

But influence is part of learning a craft. Just as doctors learn from doctors, actors acquire knowledge from other artists.

These Bollywood stars are in no way Indian versions of these Hollywood legends.

But there are heart-warming similarities between the two that will only add to the aura of both movie industries.