The Influence of Hollywood on Bollywood Dance

The world of Bollywood has evolved and developed dramatically over the decades. But how much of Indian cinema’s music and dance been influenced by the West? DESIblitz finds out more.

Since its time of inception, Hollywood has proved to be a perennial source of inspiration for Bollywood. In fact, Hollywood’s impact and influence on Bollywood has been so profound that the very name of this Indian film industry is derived from it.

The term Bollywood comes from Bombay, the centre of the Indian film industry. When this industry started producing more films than Hollywood, it borrowed her hallowed aura and became Bollywood.

If the name itself is borrowed how can the dance and music of Bollywood not be influenced by Hollywood? With the advent of sound in the Indian films in the movie Alam Ara (1931), the era of black and white musicals began. 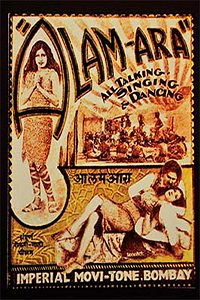 This era proves to be filled with musicals both in Hollywood and consequentially in Bollywood. The reason for the popularity of such musicals was the escapist quality that these films denoted; of larger than life dances and grand cinematic-style music.

The decades of the 1940’s and 1950’s were clogged with world war and post war activities. Soldiers needed an escape from the harsh realities of the war and thus the growth of musicals found its way into Hollywood and consequently Bollywood.

The film Alam Ara alone had not one but forty songs in total! It had so many songs that people said the film was more of dance and music and less of dialogue. The theatre and Broadway culture of Hollywood also played a major part in moulding the Bollywood dances.

Just like the musicals on Broadway like Rodgers and Hammerstein’s Oklahoma! (1943), the characters in Bollywood movies would also divulge into sudden songs and music and dance with larger than life locations, props and scenes.

Though the early dances of the Indian film industry were based on Indian traditional dances like Kathak and Bharatnatyam, the idea of producing an escapist quality for the movie with these sudden, out of context, yet glamorous musicals stuck to Bollywood. 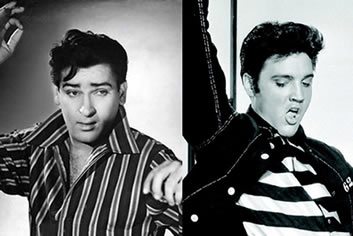 With the onset of the 1950’s where Hollywood was plagued with the pelvic thrusts of Elvis Presley, Bollywood was not too far behind and had its own house-brand, Shammi Kapoor, who later came to be known as the Elvis Presley of India.

Though the trend of dance in Indian movies was still catching on, there were still only a few hero’s who would actually dance.

Shammi Kapoor used to choreograph his own dance moves and it is evident that the influence of Hollywood’s Elvis was immensely perceptible.

Hollywood and the entire Western hemisphere was engulfed into the era of Rock’n’Roll and the trend caught up with Bollywood dances and eventually the Indian masses.

The Indian Film industry began producing films in large numbers. The number was so large that it surpassed that of Hollywood. Now since the pressure of meeting deadlines and increase in productions was so high, Bollywood dances and music often fell culprit to the deliberate plagiarism of Hollywood.

Indian choreographers and film-makers started relying on Hollywood for everything without giving a second thought to the word copyright. This set a flavour for the coming Bollywood song dances and movies of the future.

This era was one of free thoughts, radical changes and radical dance moves too. Nothing was considered too obnoxious. Therefore, we now have songs like ‘Yahoo! Chahe Koi Mujhe Junglee Kahen’ (Junglee, 1961), ‘Badan Pe Sitare Lapete’ (Prince, 1961), ‘Piya Tu Ab Toh Aja’ (Caravan, 1971), with all the pelvic thrusts and bobbing of heads that were evidently influenced by Hollywood.

The cabaret or cameo culture of Western dance also influenced Bollywood and a special breed of dancer actresses like Helen, Bindu, and Aruna Irani emerged onto Indian screens.

These girls had special roles to do; one or two sexy and glamorous songs with accompanying  dances, dressed often skimpily to offer a new window for Indian audiences watching Bollywood movies.

With the 1960’s there came the Golden era for Bollywood movies, songs and dances. The hippie attitude was still in vogue in the west especially in Hollywood movies and one often saw radical musicals on Broadway.

This trend again trickled down to Bollywood and the focus shifted to romantic genres. The Indian socio-political scene also influenced Bollywood as now songs and dance started to take a realistic hue with actors like Amitabh Bachchan and Rajesh Khanna on screen.

The dances were filled with flashy costumes and elaborate sets with on location or scenic regional located shots. The whole idea of ‘dream sequences’ was steadily catching on.

From the 1970’s and 1980’s onwards, with television now available to the masses, Hollywood not only influenced Bollywood through its dance and music and Broadway culture, but also through the MTV culture it now inculcated.

Western pop music and dance were now a fashionable trend in Bollywood dances. The hero and heroines would now perform to catchy numbers with hundreds of background dancers, and even if the song was Indian-esque the dance moves were often borrowed from the hip-hop and break dancing culture of Hollywood.

Now with globalisation and modernisation, the scene is often seen to be reversed. Bollywood songs and dances are now seen as exotic and fantastic. Though Hollywood has not voraciously been influenced by Bollywood dances, some dents are visible.

Movies like Gurinder Chadha’s Bride and Prejudice (2004), and Mira Nair’s Monsoon Wedding (2001) all have elements of Bollywood dance and music. Cheerleader teams in the West have now started adopting Bollywood music for choreographing their routines.

Moreover, American TV shows like So You Think You Can Dance have participants from to non-Indian communities performing Bollywood dances with all the spicy moves and expressions. The trend of ‘Item Numbers’ has also caught on which is an evolved way of performing a cameo or a cabaret dance.

Bollywood dance and music is often seen as an amalgamation of influences of Hollywood, Broadway, MTV, and traditional Indian dance. There is rarely a set standard to categorise a Bollywood dance. The only standard is that if it has been picturised in a Bollywood movie then it must be one.

One should not forget that if the name of Bollywood itself is borrowed from Hollywood, then how can its dance and music remain far behind? The influence of Hollywood over Bollywood has and will always remain profound unless the East dominates the West or, more importantly, Indian movie makers and choreographers attempt to be more original in their films!

"Dance,dance or we are lost", is what Pina Bausch said. With an extensive training in Indian classical dance and music Madhur is very interested in all sorts of performing arts. His motto is "To Dance is Divine!"
The History of the Tabla
Reshma ~ a Lambi Judai forever