Veteran Pakistani folk singer Reshma of Lambi Judai fame passed away on November 3, 2013. DESIblitz recaps her life and inspiring career, and celebrates her passionate and husky voice which continues to mesmerise and move listeners across the world.

"Her voice always enriched me and she connected Rajasthan, Cholistan and Sindh."

‘Lambi Judai’, the haunting song of yearning from Subhash Ghai’s Hero (1983), still continues to be in the list of favourites of many a music buff. But Reshma, the Pakistani folk singer who crooned the song, is no more. She died of throat cancer on November 3, 2013 at a hospital in Lahore at the age of 66.

Subhash Ghai expressing the loss of Reshma said: “I guess Reshma chose nothing but her art to express with passion, power and purity in her singing. And, that’s how she will remain immortal.”

Reshma was a well-loved singer of both India and Pakistan. She was born in 1947 in a small village near Bikaner in Rajasthan to a gypsy family. Her father was a horse and camel trader. Her family later moved to Karachi, where she spent most of her childhood. 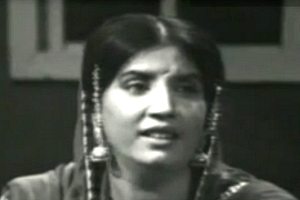 Reshma’s singing talent emerged from a very early age. While she had no formal schooling, she spent most of her days singing at religious shrines in the Sindh province.

Her big break came at the age of 12, when radio and television producer, Saleem Gilani, spotted her singing at Shahbaaz Qalander’s shrine and was impressed with her voice.

Mr. Solangi of Radio Pakistan recalls the singer: “How could I forget Reshma? In my youthful years her voice always enriched me and she connected Rajasthan, Cholistan and Sindh. She was the voice of love and peace.”

Reshma went on to become a leading folk singer in Pakistan, lending her rural vocals to some prominent films of Pakistan and even India. She also performed in numerous concerts at home and overseas. 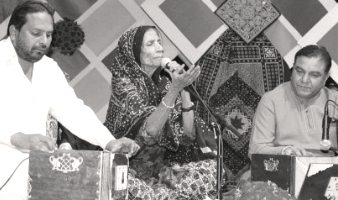 Her awesome, unbridled and divine voice won her recognition as a genuine folk singer who represented the best of the nation’s rural culture. Simplistic yet pleasing to the ear, Reshma had the unique ability to enthral crowds with her emotive voice.

Reshma was never bothered by the fame she received, and continued to perform and live a simple lifestyle, donning a traditional salwar kameez from Rajasthan, which she would wear to all her live concerts.

Reshma also came to be acclaimed as Malika-e-Registan (The Desert Queen) and Bulbul-e-Sehra (The Desert Nightingale) and was honoured with the prestigious ‘Sitara-e-Imtiaz’ and ‘Legends of Pakistan’ award for her contribution to the field of music.

As her voice found many fans in India, she was invited to perform live across the border and even Indian Prime Minister Indira Gandhi took time out to meet this humble yet inspiring lady.

Reshma sang with a number of renowned singers including Parvez Mehdi. Atif Aslam also played an emotional tribute to the legend, singing a special rendition of ‘Lambi Judai’.

Interestingly, Reshma was diagnosed with throat cancer as early as the 1980’s. However, she continued to perform and sing as much as she could. Former Pakistani President, Prevez Musharraf came to her aid during this period and she was placed on government assistance. 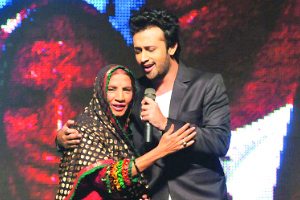 Her fame in the UK among British Pakistani’s was also considerable. In 2002, they arranged a concert for Reshma at the Brunei Gallery in London. Her children, Khadija and Umair, notably joined her on stage and also performed at this event.

The simple lady was delighted and touched by the adulation and love she received across the border. She responded to the affection by singing melodious hit songs for Hindi movies and at cultural exchange events in India.

In 2006, Reshma was one of the first music artists to travel on board the Delhi-Lahore Friendship bus, as a way of promoting harmony between the two countries. On this trip, she was accompanied by her daughter Shazia who both received a grand reception upon arrival in India.

As a product of both countries, Reshma emphasised the importance of cultural activities to generate friendship between the two estranged neighbours:

“I feel that these people are my brothers and sisters. There is no difference between Pakistan and here [India]. One people, one nation, we have come here with much love and respect.”

Within the Indian film industry, Reshma revered the composer Naushad as her guru and actor Pran, whom she called ‘Chacha’.

In 2012, a well-received event named Sham-i-Tehseen was organised in Pakistan to honour the queen of folk and semi-classical singing. Prominent singers like Mohammed Ali, Shazia Reshma and Gulshan Ara presented their versions of Reshma’s famous songs.

In April 2013, her health began to deteriorate further and she was admitted to a hospital in Lahore. The Pakistani government agreed to cover all her treatment expenses. However, Reshma lapsed into a coma in October and breathed her last on November 3, 2013. 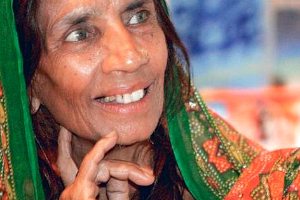 Pakistani artistes have paid touching tributes to the late icon. Singer Abida Parveen says: “Reshma was not only a one of a kind singer in the entire world but also a very friendly, simple and humane person.”

Singer Hamid Ali Khan maintains: “People and artistes like Reshma are seldom born. She was a very simple and kind lady who had a voice of her own. There can never be another Reshma again.”

Indian journalist, Farzana Versey’s tweet succinctly summarises the bitter-sweet essence of Reshma’s singing prowess: “She broke the silence of the desert. #Reshma. A voice so wounded, pain became the song.”

It is clear that Reshma’s innocent and simple singing style resonated with many South Asians. Indeed, her voice evoked the soul of the rural village. While she has sadly passed away, it is clear that her legacy in folk music will continue to live on.

Arjun loves writing and has a Master’s degree in Journalism and Communication from The Ohio State University in the U.S. His simple motto is “Do your best and enjoy the rest.”
The Influence of Hollywood on Bollywood Dance
The Magical voice of Sunidhi Chauhan