The Magical voice of Sunidhi Chauhan

Musical superstar Sunidhi Chauhan has singlehandedly redefined what it means to be a female Bollywood playback singer. The beautiful lady joins DESIblitz for some exclusive Gupshup.

"I realised this is something that I want to do for life. It’s not just singing for me, it’s passion."

Sunidhi Chauhan certainly needs no introduction. Largely regarded as one of the best playback singers of our generation, fans from all over the world are enthralled by her magical voice.

Performing since the tender age of four, Chauhan first became part of the music scene in 1996 via a reality talent show, Meri Awaz Suno. 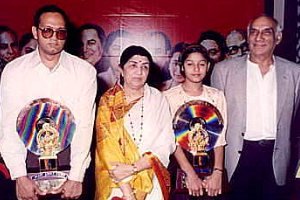 But, it was Ram Gopal Varma’s Mast that set Chauhan’s career into first-gear. Since then, Sunidhi has, musically speaking, consistently delivered hits and, for over a decade now, reigned supreme.

In an exclusive Gupshup with DESIblitz, Sunidhi says: “I was four years old when I started singing. It was just a hobby.

“I never thought that I would want to do playback singing. It was not even on my mind. But when I grew up and I started doing more shows, and I sang my first playback song.

“That’s when I realised that this is something that I really want to do for life. And it’s not just singing for me, it’s passion.” 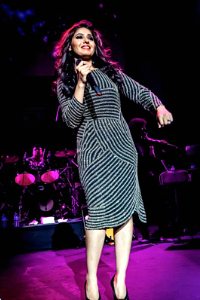 Not forgetting the most renowned item song of our time, ‘Sheila Ki Jawani’ (Tees Maar Khan, 2010). That’s right, Sunidhi Chauhan is the real Sheila. Some may describe her voice as the very soul of Bollywood.

Sundhi arrived in the UK for her first solo tour in September 2013, presented by Rock On Music and TLC events. It was clear that this multi-talented star had many treats in store for UK audiences.

Performing in Leicester, Manchester and the prestigious Royal Albert Hall in London, audiences were given the chance to dance uncontrollably at some points and sway romantically at others. This tour was the whole package:

“I just love coming to the UK. I think it’s a beautiful place, lovely people. They’re music lovers. The best thing about coming here is the audience who come to see your show; they have a very good taste.”

“They listen to all kinds of songs, even Punjabi songs. So I think that’s something very beautiful and unique about the UK,” says Sunidhi.

In person, the singer creates a remarkable feeling of awe. Seemingly impervious to the crowd of cameras, Sunidhi softly starts singing to occupy herself before our DESIblitz interview. Her sincere and natural love for the art of music seeps through each note.

Yet, for a woman who has achieved top accolades time after time, she seems genuinely overwhelmed by the praise she received. She speaks with kindness, humility and, quite unexpectedly, shyness.

It wasn’t until we asked her to sing for us, however, that she came into her element. It soon became apparent just how much of herself she has invested into her music:

“It’s never enough. There’s a lot more left to explore. In music itself, I still have to do so many things. I want good albums, I want to sing Ghazals. I want to do semi-classical songs. So, I’ll keep doing that, because this is life, what I breathe.”

Surprising indeed is the fact that Sunidhi Chauhan has not received any genuine musical training. Even so, Chauhan possibly has the most distinct ‘husky’ and variably dewy voices today. Citing Lata Mangeshkar as her greatest inspiration, Chauhan’s voice could not be any more different to her predecessors. This may explain her international appeal.

Having already collaborated with the internationally acclaimed Enrique Iglesias, Sunidhi hints at some upcoming international collaborations but keeps her lips sealed as to the identity of her collaborators:

“I did my last collaboration with Enrique Iglesias and I’m really over the moon to sing with all these artists who are fantastic, and I’m a fan of them. It’s two artists from two different worlds collaborating together on a song,” says Sunidhi.

Before us was a lady who has been grooming her career since the days her fellow peers were still brushing the hair on their Barbie dolls. She has both fallen in love and had her heart broken (Chauhan married and divorced choreographer Bobby Khan) and then re-fallen in love with music composer Hitesh Sonik, all whilst maintaining her spot at the top.

It is clear that Sunidhi Chauhan is the essence of musical sincerity. Her experimental originality makes her one artist we would travel far and wide to see over and over again. Bringing females to the forefront of playback singing, Chauhan has indeed become a master of her craft.

Shiza Khan is an aspiring Barrister by day and Bollywood buff by night. She well and truly believes that: "The secret to success in life is to eat what you like and let the food fight it out inside."
Reshma ~ a Lambi Judai forever
Top 5 Dance Choreographers of Bollywood