From favouritism to music remixes and the quality of songs, Sunidhi Chauhan shares her opinions about the music industry of India.

Sunidhi Chauhan is one of the most popular singers in the Indian music industry.

She has established herself to be a versatile singer with some great songs in her bucket.

Sunidhi Chauhan has recently shared her views on various topics related to the Indian music Industry.

Sunidhi shared her struggle in the industry as she had a deep singing voice.

She also had to bear the comments like having a “man’s voice”. Sharing her experience, Sunidhi said:

“I got to hear that in the initial stage of my career but I wasn’t sad about it.

“I was like OK!  let’s take it positively, and started working on my voice also.

“I started with singing romantic songs and it changed a lot of people’s opinions about me singing only one genre and then I started to get more romantic songs.

“And I am, in a way very happy, that I was told such a thing because that completely gave me the boost to get better.”

Sunidhi Chauhan believes that Indian music is on an upward trend again. She says:

“In the last seven years or so, I can see people are developing that taste again.”

She also thinks that people are looking now at music beyond just Bollywood. She added:

“It’s no longer just Bollywood music, but there is so much that people are willing to explore.

“Music is changing and there is an audience for Coke Studio, original music.

“I am glad that most of us are trying to explore the space by creating original music.

“Remixes are not a bad thing to do but they should be tasteful and should be done nicely. There has to be a thought behind it.

“There are too many remixes happening at the same time, and less original music.

“Remixes should happen but not at the cost of originals.”

Sunidhi Chauhan is also optimistic about future the of music artists in India.

She credits new music platforms for reviving the music and giving alternative platforms to music artists. She elaborated:

“Artists are no longer afraid if they’ll be getting views and appreciation.

“Even I want to do the same, not that numbers don’t matter, of course, they do but ultimately it is what comes straight from your heart. 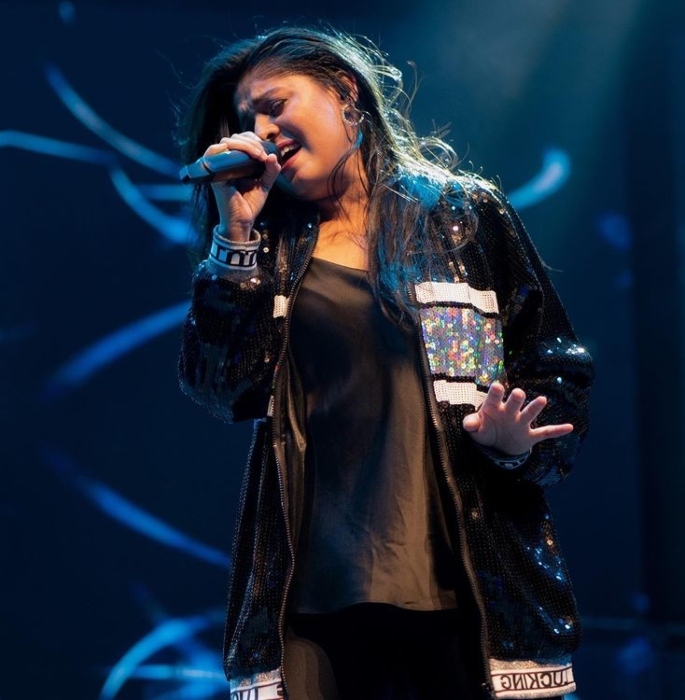 Sunidhi Chauhan goes on to express her appreciation towards the Indian music industry for providing opportunities to many new artists. She said:

“It has opened its arms for new voices, new composers, new lyricists and it’s great.

“I do agree that there’s was a time, say 15 years ago when people were happy with what they already had and didn’t want to experiment much.

“You and I both know how many new voices we are listening to these days and they are doing so great and are all unique from one another.”

However, she explained that there is favouritism within the industry.

“I am sure there must be some sort of favouritism in the industry.

“I feel it’s good if somebody is talented then one needs to support that person and vice versa.

“I have been a favourite of many and I have received a lot of love from all my music directors and I never had to face that.”

She believes that the music industry has always provided good support to talented singers.

“The music industry has always been open to a good singer.”

“We did have Reshma Ji, Usha Uttam Ji – they were not just welcomed but celebrated.”

Sunidhi Chauhan is all set to release her independent track, ‘Ye Ranjishein’ after 20 years.

Explaining the gap of 20 years, she said:

“Film music kept me busy all this while and there was no time to think of anything else.

“Thanks to the lockdown I had enough space to think about what I wanted to do other than film music.”

‘Ye Ranjishein’ is made in collaboration with 9X Media’s Indie Music Platform.