The History of the Tabla

The tabla is a charming and endearing Indian musical instrument. Indian masters have made it popular all over the world. DESIblitz reveals the interesting story behind the evolution and popularity of the tabla.

The tabla’s charm has attracted the attention of scholars and music lovers around the globe.

Like most other Indian musical instruments, there are many interesting myths and legends about the origin of the tabla. Many authors cite the 13th century Sufi poet/musician Amir Khusrau as the inventor of this instrument.

But there is no clear evidence, in the form of writings or paintings, to confirm the above claim without doubt. Another person credited with inventing the tabla is Sidar Khan Dhari, a court musician in the Delhi durbar in the 18th century.

Most likely no single person was totally responsible for creating the tabla and diverse influences led to the development of its physical structure and musical repertoire.

What is certain is that the tabla fuses Arabic, Turkish and Persian influences with indigenous Indian drums. In fact, the name tabla originates from ‘tabl’ the Arabic term for ‘drum’. The dholak and pakhawaj seem to be early forms of the tabla.

In the Indian durbars of the late 18th and early 19th centuries, Muslim tabla performers accompanied instrumentalists, vocalists and dancers.

These artistes also developed their personal sophisticated solo repertoires in private musical gatherings. This aspect along with the teacher-student tradition paved the way for the creation of the tabla gharana lineages.

There are two tabla drums used to create music. The smaller drum is termed dayan and is made of wood. It is played with the right hand. The larger deeper-pitched drum is made of metal and is known as bayan. Both drums have goat or cow skin covering. They have a black middle spot made of iron fillings, soot and gum which produces a characteristic bell-like sound when drummed. 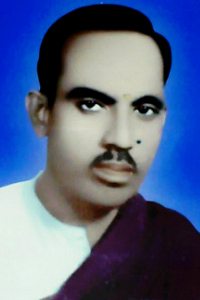 It is rightly said that no North Indian classical music composition can be called complete without the tabla in it. Its distinct and unique sound makes it an integral part of Indian music.

Tabla is the most widely used percussion instrument in North Indian music and is classified under the membranophone family of instruments. It has two main gharana styles namely Dilli Baj and Purbi Baj. Both are different in their techniques and methods of music composition, and each gharana boasts of its own unique identity.

Musicians also recognise six other gharanas or traditional schools of tabla. These are Delhi, Lucknow, Ajrara, Farukhabad, Benares and Punjab gharanas. Each gharana is unique because of specific bol techniques and tabla positioning.

During the days of royal patronage, it was important to uphold gharana traditions and keep them secret. But today tabla players are more free and combine various aspects of different gharanas to create their own styles.

Some music experts say the gharana tradition has virtually ended as changing lifestyles and training methods have made it almost impossible to maintain lineage purity.

It is not easy to play the tabla. You need to exercise great control over your hand movements. A seasoned tabla player uses his palms and fingers to generate diverse sounds at different pitches thereby creating amazing effects on music compositions.

Playing a tabla solo is a cherished and unique phenomenon in the art of drumming.

The percussive instrument can hold its melodic own for hours and yet not sound boring thanks to the wide repertoire of compositions.

The tradition and popularity of the solo tabla performance continues to grow as time marches on.

Apart from classical music, the tabla has made its mark on devotional, theatre and of course film music. It is a much sought after instrument in cross-cultural and fusion musical experiments.

In Northern India, the tabla is a ubiquitous instrument which accompanies the Hindu bhajan, the Sikh shabad, the Sufi qawwali and the Muslim ghazal. Hindi pop music and Bollywood soundtracks also make extensive use of the melodic tabla.

The tabla’s sophistication and charm has attracted the attention of scholars, musicians and music lovers around the globe. 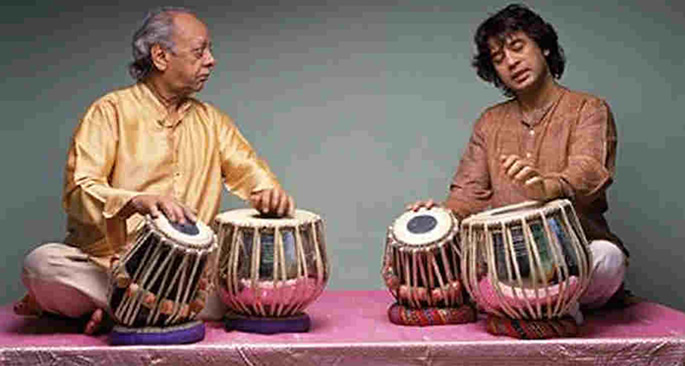 In the 1960s, Ravi Shankar popularised the sitar and Indian music in general in the West. The Beatles were so enamoured that they featured Indian music including tabla strains in a few of their songs. Indian and Western musicians started collaborating to produce a fusion style.

Ustad Ahmed Jan Thirakwa Khan (1892-1976) was a renowned tabla player who was considered an influential percussionist of his time.

Another maestro was Anokhelal Mishra who specialised in the Benares gharana. He was famous for his tremendous speed of playing and produced uniquely perfect sounds which earned him the nickname jadugar (magician).

Indian musician Alla Rakha Khan is credited with popularising the tabla around the world, elevating the respect and status of this instrument.

In Pakistan, Ustad Tari Khan has created a name for himself as a virtuoso tabla player. In fact he was crowned the Tabla Prince of India and Pakistan. 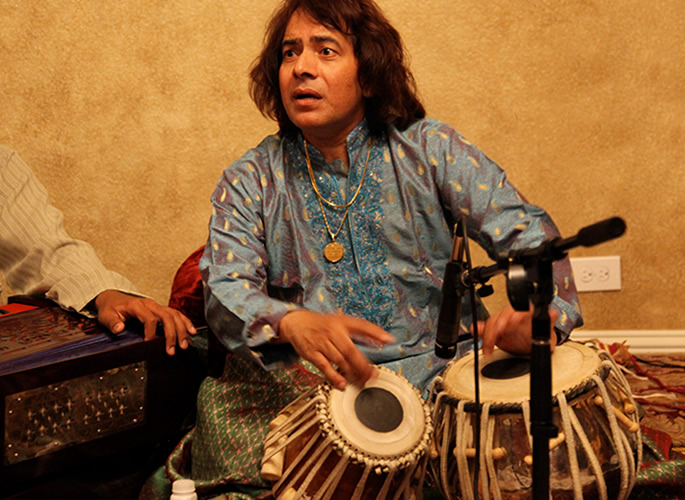 Alla Rakha’s son Zakir Hussain was a child prodigy who started touring and performing when he was just 12 years old. His accomplishments include collaborating with the Beatles and his calendar used to be packed with more than a hundred concert dates every year.

Along with Grateful Dead’s Mickey Hart, Zakir Hussain founded a percussion band named Planet Drum which won a Grammy for world music in 1992.

Even today, Zakir Hussain is regarded as one of the world’s leading tabla players and composers. His fame and international recognition has increased the prominence of Indian music worldwide.

Today, more and more westerners are learning to play and enjoy the tabla, sitar and other Indian musical instruments. Famous tabla players in the U.K. include Talvin Singh and Trilok Gurtu.

Arjun loves writing and has a Master’s degree in Journalism and Communication from The Ohio State University in the U.S. His simple motto is “Do your best and enjoy the rest.”
The Amazing Dances of India
The Influence of Hollywood on Bollywood Dance