"As artists, we should aim for progress every day, not perfection."

Indian musician Gurtej Singh, otherwise known as ‘nyvirtuoso’, has been mesmerising fans with his soothing and passionate covers on Instagram.

Having moved to New York from India, the gifted star has been showcasing his musical talents to the world.

At only 20, Gurtej’s renditions are comforting, passionate and distinct, managing to captivate listeners as soon as the first word is sung.

The authenticity and elegance within Gurtej’s voice echo the sound of his influences such as Alicia Keys and Ed Sheeran.

However, his upbringing around Indian classical music has ingrained a massive appreciation for Desi tones and percussions.

His soulful sound mixed with his impressive performances on the piano and guitar has elevated Gurtej within the industry.

Even gaining recognition from popular Indian Canadian rapper Fateh, Gurtej is already cementing himself as an important South Asian musician.

The creative musician even holds some astounding ‘studio sessions’ on his Instagram, where he showcases his remarkable knowledge of musicality.

Motivated by his surroundings and oozing with the Indian work ethic, Gurtej is bursting with ambition, expressing his goal to help others with music.

As he continues to flourish, DESIblitz spoke exclusively with Gurtej about his upbringing, stumbling blocks and musical influences.

Tell us about your background – childhood, family etc.

I was born in New Delhi, India. My dad’s side of the family is from Kashmir and my mom’s side is from Delhi.

Although I spent most of my time in Delhi; the trips my family and I made to Kashmir were more memorable.

It was something about the open prairies and the sounds of fresh river water flowing downstream in Gulmarg that kept me thinking about that place.

I attended S. S. Mota Singh school up to the first grade. Most of what I remember from that time was coming home from school and eating ‘fun flips’, a popular brand of chips while watching Doremon on Hungama TV.

It was sometime in 2005 around the winter months when my mum and I moved to New York.

My Dad and uncle were well-known Kirtanis ( singers of religious hymns from the Guru Granth Sahib).

They were invited all over the world to different Gurdwaras (Sikh place of worship). They ended up settling in New York.

Other than doing kirtan both my dad and uncle were skilled carpenters. After working in the industry for some time, they started their own construction company – “Sardar Construction Corp”.

They saved every dollar from doing kirtan and construction and brought my mum and me to the states.

The mission was to get my entire family moved out of India as there was little to no opportunities for growth there.

New York was where it was at! In the words of Alicia Keys, it’s a “concrete jungle where dreams are made of.”

I was oblivious to the whole thing at the time. Little did I know that moving to New York would change the path of my life in ways that I could have never imagined.

When did you first develop an interest in music? 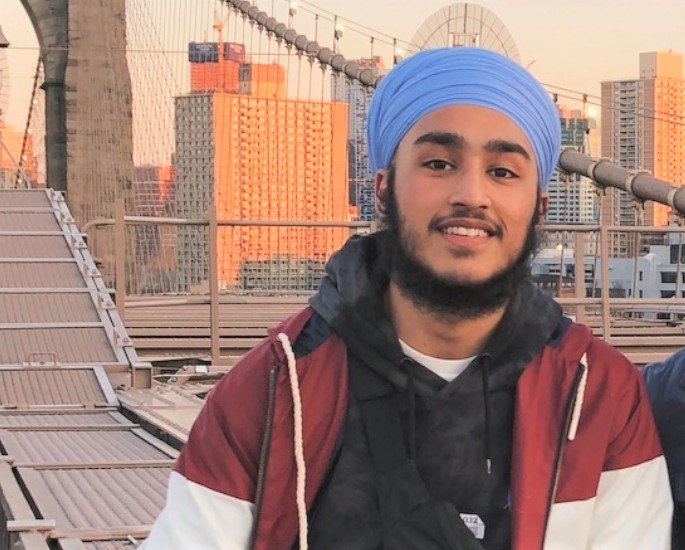 I would say that I’ve always had an interest in music.

My mum would tell me that I’d always bother my dad when he would practice. Always trying to play his harmonium and bang the tabla as loud as I could.

It was when I started the 4th grade I remember falling in love with the western sound. I had the whole speaking English thing down really well by then.

Not only did I hear the melodies, but I also began to understand the words.

Every other day, when we would have music class; my music teacher would introduce us to artists like the Beatles and Michael Jackson.

I would go home and listen to every Beatles and Michael Jackson songs I could find on YouTube.

Through those two artists, I discovered artists like Nick Drake, Akon, the Mamas and the Papas, and many more. I was never shy.

I tried to sing for my music class whenever the opportunity came my way and simply enjoyed sharing my love for music with others.

Being the only kid with a patka (kids turban) in my school at the time helped me make my first friends.

What kind of music influences you?

I try to listen to all types of music.

For the most part, I’ve always gravitated towards acoustic type songs (the artist accompanied by a piano or guitar).

“Pink Moon” by Nick Drake is a great example. Another one of my favourites is “Vincent” covered by Passenger.

Instruments like the sarod, dilruba, santoor, lute, cello, guitar and koto just to name a few. Each one is able to express emotion in its own meaningful way.

Music to me can come from anything. It does not have to be a musical instrument for it to influence me.

From rain hitting the roof of my jeep to the conversations of birds on my local bike trail; it’s all music that has brought me to where I am today.

How would you describe your style of music? 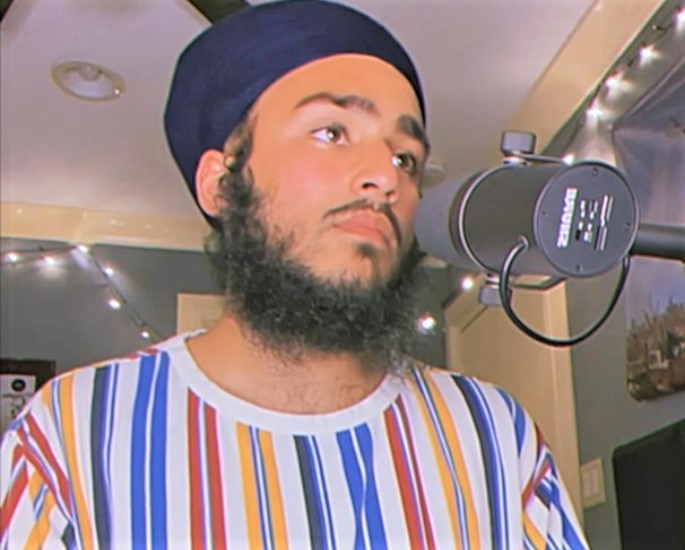 At the moment I don’t have much original material out. It’s a working progress.

I cover songs at the moment and sing songs with my own twist.

I may change the chord progression to create a new mood or maybe change the pace of the song from fast to slow to create almost a totally different sounding piece.

But I like to keep it simple with my piano and guitar.  My style is definitely a hybrid of all the artists I’ve grown up listening to.

I’ve adopted little bits and pieces from the dozens of artists I’ve listened to over the years to create my own style.

I mostly play the piano and guitar. I’ve been messing around with the cello on and off for about a year now.

I played trumpet in band for 4 years in grade school and played both snare and bass drum for a drumline in high school.

I can also play a little dilruba and tabla.

A lot of the skills from learning to play one instrument can be transferred to the next. I enjoy the process of learning a new instrument.

What has been the reaction to your covers? 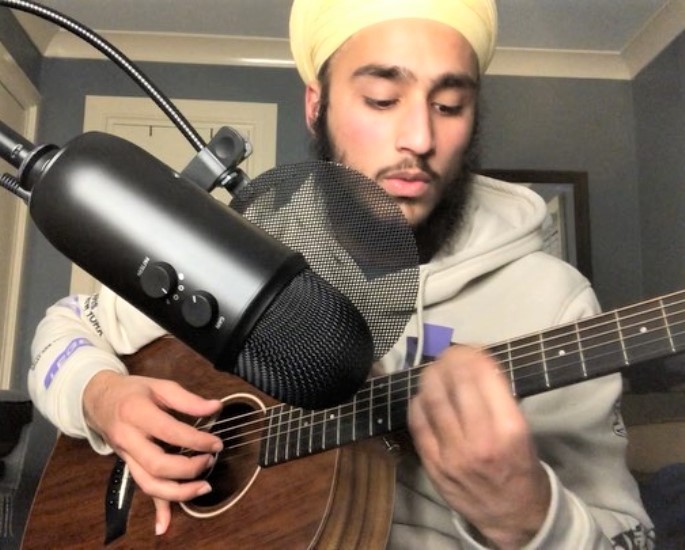 When what people hear doesn’t match what they see, it creates a really powerful combination.

I think that’s what captivates my audience. It’s not every day that you see a Singh singing blackbird by the Beatles.

The response from the Desi community has been overwhelmingly positive.

I receive dozens of supportive messages every day from all around the world. People within my community I think would like to see me succeed.

I’m humbled and honoured to have a position where I can share my love of music and raise awareness about a minority group that also makes up the fabric of the American culture.

Keeping it real, I don’t listen to much Desi music.

I don’t know if you can consider Indian classical music as Desi but that’s pretty much what I listen to if it isn’t western.

Indian classical music is unique in that there is no sheet music. Usually, there is a set number of beats in which improvisation is encouraged.

It’s all up to the player, how he or she wants to convey a message or tell a story through a particular raag or beat cycle.

I find that really interesting and I would say that the idea of improvisation has influenced the music I create today. 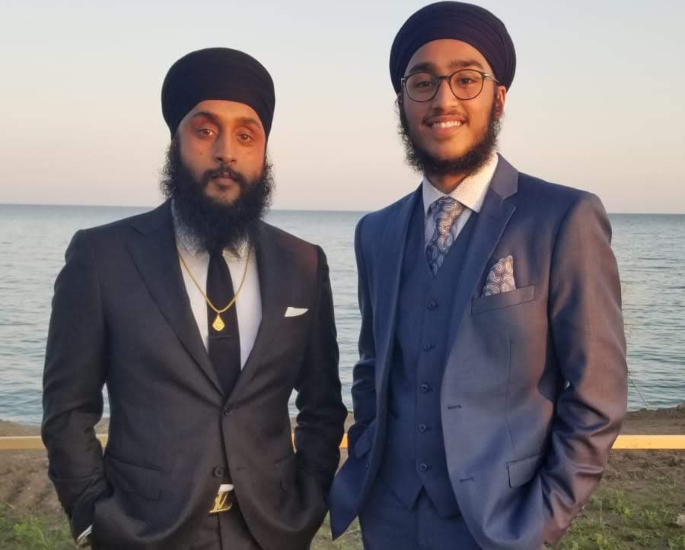 Recently I started listening to an artist called Jacob Collier. I would love to work with him!

His knowledge of music theory combined with his insane ability to play virtually every instrument known to man makes him a one of a kind creator.

I would also like to work with Ed Sheeran. He’s an artist I’ve taken a lot of inspiration from.

He’s someone that has consistently put out quality music. With just a guitar and his voice, he can capture the attention of millions.

Lastly, I’d like to work with John Mayer. He’s a skilled songwriter and instrumentalist that has come out with timeless pieces like Gravity and Neon.

I’d like to learn how he’s been able to perform live for millions so skillfully.

What challenges have you faced as a Desi musician?

I’d love to make music a full-time career. It’s hard convincing your Desi parents that this can be a career.

Not having the full support from family can make you doubt yourself. Especially when you can go to school and get a 9-5 just like everyone else.

But for an artist, there’s no fun in that.

For me at the moment, I’m trying to find a balance between work, school, and my passion for music. I think many other Desi artists can relate.

Expectations to do well in school are kept very high and pursuing an artistic passion is nothing more than a hobby that will die out once you start working.

At least that’s the way I feel my parents think of it. I don’t think they’ll understand until I come with my first big check (kidding).

As artists, we should aim for progress every day, not perfection.

We need to use the people that don’t believe in us as fuel to keep pushing forward till we reach our artistic ambitions.

What are your ambitions musically? 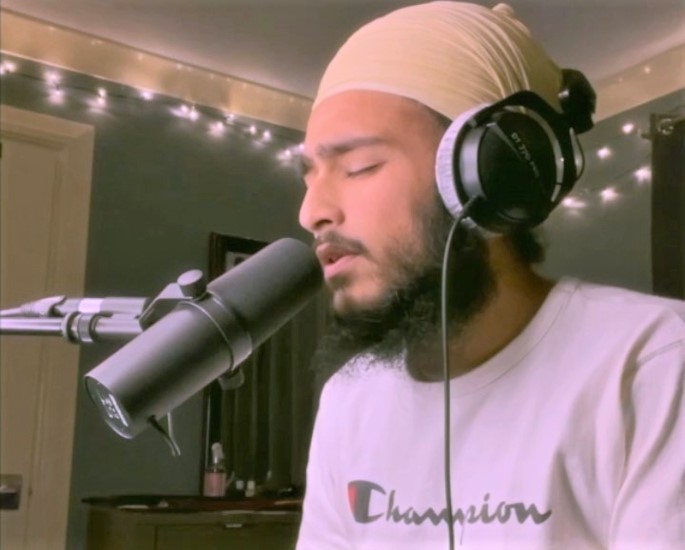 I want to be remembered as one of the greatest Sikh American artists that ever lived.

I want to sell out arenas. Collaborate with world-class musicians. Write, produce, and publish my own songs as an independent artist.

I would like to be able to mix and master my own songs. Just simply be the best at what I do.

Above all, I hope to inspire others to pursue their passion – to step outside their comfort zone and challenge the status quo.

I was the only Sikh/dude with a turban and beard in my high school production of Guys and Dolls.

Not a lot of people that look like me do what I do and I’m okay with that.

Having already gathered over 8000 followers on Instagram, Gurtej shows no signs of slowing down.

His catalogue of skill and dedication towards his craft has distinguished Gurtej within an industry that imitates a lot.

His commitment to succeed has allowed the superstar to propel. The sensuality in his voice is hypnotic and creates this airy atmosphere of comfort and soul.

Impressively, Gurtej’s progress so far is stemmed from singing covers. The reaction towards his original music will undoubtedly skyrocket his career to another dimension.

As he continues to shine, Gurtej’s exploration of different sounds, melodies and techniques highlights his unparalleled yearning to succeed.