Mika Singh jubilant about Salman Khan and SRK Dancing Together

Bollywood singer Mika Singh was ecstatic to see superstars Shahrukh Khan and Salman Khan dancing together on stage to his live performance with other stars at Sonam Kapoor and Anand Ahuja’s wedding reception.

"Both of them were dancing on stage for almost an hour"

Whilst many celebrity guests attended the bash, it was Salman Khan and Shahrukh Khan that made it extra special for him.

The two superstars accompanied Mika Singh on stage and danced to him singing, joining in the celebrations in an “ekdum jhakaas” way as Anil Kapoor, father of Sonam would say!

Mika expressed that it’s not an easy feat to get to this duo dance together on stage, but it happened and he was ecstatic, saying:

“I will never forget this party in my entire life because it was one of the biggest days of my life.”

SRK was on the stage dancing with Anil Kapoor and Ranveer Singh initially and then Salman came and joined in as Mika Singh was singing the track “Laila Main Laila” from Raees. At which point SRK hugged Salman Khan as Mika Singh smiled and looked. The duo then started dancing.

Jubilant about the experience of performing at the wedding with Shahrukh Khan and Salman Khan on stage, he said that they “took the whole atmosphere to another level”, adding:

“It is very difficult to make the two superstars dance together on the stage. Both of them were dancing on stage for almost an hour.”

Then the Khan duo was joined by other Bollywood stars at the wedding, “Then Varun Dhawan, Ranveer Singh and Arjun Kapoor did a lot of fun on stage,” said Mika.

A tweet by Bollywood hero Ranveer Singh shows all of them grooving to Mika’s singing:

Whilst SRK and Salman Khan made headlines for dancing together, it was the father of the bride, Anil Kapoor that won the votes for the most energetic dancer accompanied by fantastic moves at the party!

The star-studded wedding reception of Sonam Kapoor and Anand Ahuja was held at the Leela.

It was not just the dancing when the duo teamed up at the party! Salman Khan and Shahrukh Khan got together on the mic to sing a song from Bollywood film Karan Arjan in which they both appeared for Sonam Kapoor’s mother. 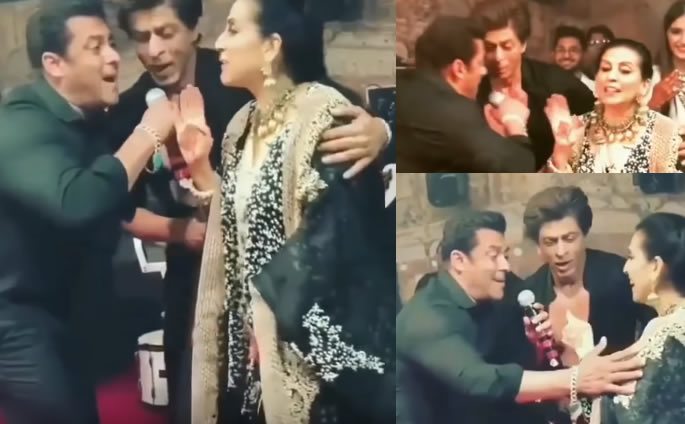 Media asked Mika whether he though Salman should get married now, to which he replied:

“I think Salman is an ultimate human being. He is really handsome and down to earth individual and when he sings, he looks really cute. I think he is the real King. Earlier, Kings used to have so many girlfriends. I don’t think he needs anyone.”

The latest music production by Mika Singh is called Sama- The Summer Love, which is sung by US-based model and singer Madhu Valli.

The music video for Sama is directed by Sumit Bharadwaj features Madhu Valli, Aarti Khetarpal and Raika Khan has featured in the song along with Mika Singh.

Speaking about the song, Mika said:

“Today’s generation like to listen new sound, music and voice. It’s already a hit and popular song. We had a meeting with Sa Re Ga Ma when we decided to recreate this song because original rights of the songs are with Sa Re Ga Ma.”

Watch the video of the wedding reception party:

Nazhat is an ambitious 'Desi' woman with interests in news and lifestyle. As a writer with a determined journalistic flair, she firmly believes in the motto "an investment in knowledge pays the best interest," by Benjamin Franklin.
Jasmin Walia is Fearlessly Hot in her Music Video ‘Sahara’
Star Plus Serial Title Songs We’ll Always Love