British Asian identity is often a challenging subject for film. Everywhere+Nowhere uses music and the ambitions of a typical Brit-Asian guy to become an inspiring DJ as the subject matter to depict the conflict between family pride, secrets, culture and dreams.

"his character role struggles with the notions of identity"

James Floyd, Simon Webbe and Shivani Ghai star in Menhaj Huda’s “Everywhere+Nowhere.” Whilst cross networking on their own projects, the stars came together to work on this film. DESIblitz found out more about the film in a close chat with the cast and the crew.

James Floyd takes on the lead role as Ash Khan and describes his character as, “British Asian Londoner.” Everywhere+Nowhere focuses on the journey that Ash Khan goes through as a British Asian. This film draws upon the realities of life that one would go through, being in a family from a typical suburban life. Floyd has a strong talent to be able to portray a comprehensive character, following his dream as a DJ. He tells us: “his character role struggles with the notions of identity.” Ash is trapped between a ‘two lane path.’ Does he follow his family traditions or does he tread upon a multicultural ‘route’ with his friends in London? 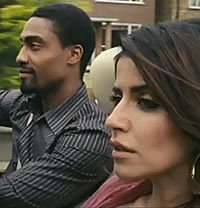 The script of Everywhere+Nowhere was a key attraction for the cast. Simon Webbe (character role as Ronnie) from the boy band group Blue has recently started his career in the film industry. Webbe’s first film was the Truth About Love in 2004. He has been progressing in his acting career. Webbe gave us a juicy secret on how he was spotted for his acting, he told us that Menhaj Huda recognised his talent while he was acting in Sister Act (the musical) at the London Palladium and the opportunity to work with Huda attracted him to work on this script.

Webbe’s co-actress Shivani Ghai (character role as Sairah) was attracted to Huda’s previous film Kidultood. She said: “I wanted to work with a great Director on a great script i.e. Everywhere+Nowhere.”

After the film titled “Kidulthood” in 2006, Menhaj Huda directs Everywhere+Nowhere. James Floyd talking about the story says it is:

‘Kidulthood’ brought Adam Deacon together with Menhaj Huda, and enabled them to collaborate on Everywhere+Nowhere. Adam Deacon is also known for his acting in the sequel, “Adulthood” in 2008 and his direction for the film, “Anuvahood” in 2011.

DESIblitz asked Simon Webbe about his future with Blue and films. Will he carry on singing or acting? Webb replied: music is my passion, as for acting if the opportunity came up for acting while I was having a break from Blue, I would jump at the chance.” Webbe always wanted to act in films that enabled people to relate to his role. He enjoyed working on this film, Webbe says: “every second has been memorable on working on this film.”

Here is the official trailer to the film. 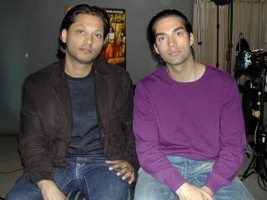 With many more projects to come, the cast and the crew are working on several films, each with a different idea in mind. After starring in Tormented, Picnic in Gaza, and The Infidel, Floyd takes on the main character role in “My Brother the Devil”. Floyd briefly mentions that this “is a love story about two brothers.”

In contrast, Huda will be experimenting with horror films. He says, “I will not have to think about the politics of the meaning of the story, I can focus on scaring people.” Huda mentions, “I was approached by a writer and producer to direct a horror film. I would really like to make a horror film to see what people make of it.” Huda adds, “most horror films are not particularly scary these days,” which leads to the controversy of whether acting in horror films is ‘real’ acting or not.

Shivani Ghai’s passionate acting career has taken her on a long journey. Ghai’s forthcoming films, Clean Skin and London Life will release in summer 2011. We hope her acting journey leads her to work alongside her idol, Amitabh Bachchan.

Everywhere+Nowhere releases in cinemas UK wide from the 6th May 2011 and a must see for music lovers and DJ’s with ambition.

Smriti is a qualified Journalist with an optimistic take on life, enjoying sports and reading in her spare time. She has a passion for arts, culture, bollywood movies and dancing - where she uses her artistic flair. Her moto is "variety is spice of life."
Talvin Singh and Niladri Kumar ‘Together’
A Rendezvous with Kailash Kher