September 2012 was the month for LFW, otherwise known as London Fashion Week 2012. We look at some of the highlights from the important event in the UK Fashion calendar.

"I wanted to make people smile, for the colours to be exciting and pop, to be juicy"

Best of British was on full show during 14th September–18th September 2012 with networking events and various other social activities associated with this prestigious event, London Fashion Week.

The week kicked off with some up and coming new talent as well as the veterans of fashion like Vivian Westwood, Jasper Conran to name but a few. On average 10 designers per day were exhibiting collections that took the not just the country by storm but also internationally.

The designers that the eye of London and media attention was Jasper Coran and John Rocha.

Both British designers kicked off day two delivering youthful and fun collection which surprised most. John Rocha took it a step further with creations influenced by sculptures that intrigued guests.

The typical signature look of Conran was not gracing the catwalk but a more youthful and playful. Heavily influenced by retro American theme, flowers, stars and stripes. This is something very different to his previous collections which were considered too formal. From this particular collection it seems that Conran is hitting a bigger market to give more versatility. 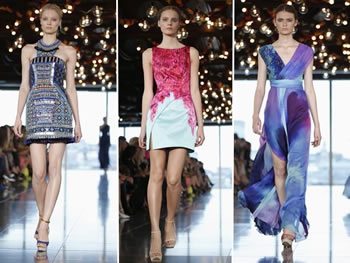 British designer Matthew Williamson celebrated his fifteenth year in business. His collection which has been compared to Sienna Miller, but glossier. Tiny dresses with big mirrored embellishment, silk blouses adorned with prints of Tibetan temples and worn with sky blue capri pants, woven and jewelled bags. A very glamorous collection but not the everyday affordable prices. But soon enough these designs will be emulated to the high street to bring glamour to women of all ages and price range.

Vivienne Westwood’s collection showed a remarkably restrained collection of frocks. The way this designer cuts a dress flatters the body, adding inches to the bust and covering the tummy, which most everyday women would appreciate.

The designer herself graced he catwalk with black marker scribbled across her face, while wearing tartan shorts and a climate revolution T-shirt. The collection for spring 2013 was not the usual bleak tartans which one could relate to Vivienne Westwood, but very summery colours on dresses and pant suits. The models faces were painted either green or pink, and grey streaked in their hair. 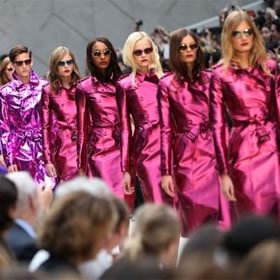 The highlight would be Burberry with their new spring 2013 collection. This very British designer bought a slick and sexy polished style on the catwalk and had models gracing the catwalk in an amazing explosion of rainbow-colored metallic trench coats. This collection said by guests ‘a bright and colourful collection that can brighten up London regardless of the weather’. Another guest was impressed and surprised that ‘Trench coats’ graced the catwalk. The colours and materials used had guests gasping in awe.

Several big names witnessed the brands new collections, including US Vogue editor Anna Wintour, who sat on the front row of the catwalk. Christopher Bailey the designer for the house of Burberry was elated with the outcomes of the show. He said in an interview: “I never thought I’d get to do something like this, it’s incredible.”

“I wanted to do something really playful, really fun. I wanted to make people smile, for the colours to be exciting and pop, to be juicy,” said Bailey. “Colour makes people happy. It just felt the right moment to do it with this collection – for it to be sexier and sassier,’ added the designer.

The signature Burberry trench coat was re vamped and became a thing of the past from its classic look to different coloured metallic lace, capes came in both long and short versions and cropped jackets came with boxy shoulders and slim silhouettes.

The rest of Burberry’s Collection consisted of corsets, pencil skirts and sleek silk dresses in raspberry pinks, emerald greens and sapphire blues, laced with a metallic edge. The catwalk looked colourful, and something any British women would take great pride in wearing.

Overall the one trait remained consistent with designers during London fashion Week September 2012, the explosion of colour. From Trench coats to office wear. The 2013 collection exhibited during this week was sending a message of colour and vitality regardless where you are and what you are doing. Fashion is for everyone and every day not just for a special gala or ball.

Savita Kaye is a professional and hardworking independent woman. She thrives in the corporate world, aswell as the glitz and glam of the fashion industry. Always maintaining an enigma around her. Her motto is 'If you got it show it, if you like it buy it'!!!
The Fashion of Asian Footwear
Purple reigns Winter Fashion 2012