The Fashion of Asian Footwear

We showcase the evolutionary steps of how Asian footwear has become an absolute essential when dressing up for South Asian occasions.

Shoes like the Paduka, have survived through five millennia

Traditionally, the feet have held a special place in both the social and religious makeup of the Asian lifestyle and Asian footwear plays an iportant role in the fashion of South Asian feet.

Many of us seem to think that the dress code is the most important part of looking good and yes, we agree. A good lengha is both traditional and beautiful but if you are walking around with footwear resembling church bells on your feet, then that beautiful, expensive lengha becomes as irrelevant as that uncle you never knew you had.

Historically, footwear was used only for expedience. People would wear the boot in places such as Kashmir, Nepal and Bhutan where it was colder than other regions. This is interestingly also where the roots of the UGG boot lies! Regardless, the shoe was only associated with special occasions and high status. Shoes like the Paduka, have survived through five millennia of human history. Louboutin only has a mere nine hundred odd years to go!

In no other culture are the feet put on a pedestal as much as they are in the Asian one.

Moving forwards from the history, let’s look at a few different types of Asian footwear, beginning with chappals. 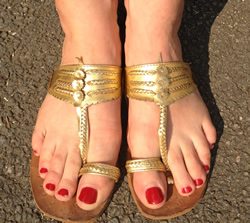 By the third century, these were the most common type of footwear within Asian and African cultures ranging from Egyptians to the Japanese to the Indians.

The reason being the comfort they provided and the protection from hot surfaces and rough terrain. They were popular amongst both sexes and are the most casual of our shoe discussions today. However, do not be deceived by their laid-back nature as they have been seen as having just as a high a status as the Khussa or Mojari!

Good old Mahatma encouraged Indians to make their own chappals and cloth as a sign of independence. This then eventually led to hippies in the 1970’s to wear them, who rejected, alongside mass-produced clothing, other Western conventions. This began the incredible journey of this Asian footwear into the Western world so do not let the simple leather deceive you! This shoe has years on the others.

Over the years it has admirably been decorated and glamorised with designers such as Louis Vuitton and Hugo Boss designing the sandal/slipper to become current. Louboutin even designed a, literally, star-studded ‘Cinderella slipper’ for women! Not that it would have been for men. But do not be downtrodden oh men. Sandals are a footwear accessory seen many times on men in summer, even if worn with socks in the UK! 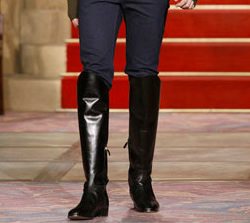 In the beginning there was the Khapusa. Sticking with the historically invigorating theme, we bring you the Khapusa. This heavy boot is undeniably the flag bearer for functionality.

The opening line is justified when we realise that its roots reach down into the first century where people in Northern India, the Himalayas, and what is now Pakistan and Afghanistan would wear them as protection from the snow, snakes, stones and all sorts.

It is probable that the Khapusa were boots of Iranian origin brought to India by the Sakas whose Iranian affinities to India are well known. With the invaders wearing such footwear, how have they evolved over the years?

Over the years we have seen the women adopt the boot more so than the men however it has currently become a fashion staple for men, looks like the boot is on the other foot. The Khapusa has now become the Wellington or ‘wellie’ and not only that but has transparent influences on the majority of boots you will see on males and females in this day and age.

London Fashion week alongside Milan, Paris and New York provided many designers from Emporio Armani to Ermenegildo Zegna who considers the knee-high boots a must for the modern man. 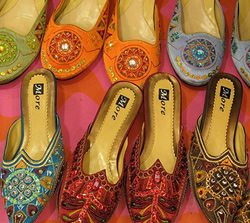 This is the one which you have been waiting for. In this day and age, with everyone getting married on their first dates, these have become just as large a necessity as the wedding outfit! However, we imply here that they are only worn on weddings but bear in mind that less decorative Khussas are always available for a ‘Jack the Lad’ type of guy, or ‘Jaspreet, Jay, Junaid.’

These originated in the Asian subcontinent where only the wealthiest male citizens would wear these during the Mogul empire in the 1600s. They have come to be defined by their pointed toes and flat soles and still to this day their royal ties are felt. The majority of the time, they are seen as being worn on special occasions.

From Rajasthan to Delhi, from the madness of New York to the suburbs of Leeds, these shoes are predominantly associated with the Asian culture. Both men and women grace their feet with the Khussa where it is hard to distinguish between right and left!

We have mentioned here many designers however with events like Pakistan Fashion Week and Lakme Fashion Week, we get a glimpse into how these traditional shoes have evolved over the centuries. We see the likes of Omar Mansoor and Marios Schwab display their thrilling collections complete with Khussas, slippers and attractive shoes in general.

Archived in the Bata Shoe Museum in Canada is a Prince’s Khussa from the 18th Century and if one was to ask the price? A mere $160,000. This is blatantly due to its historical significance but also to the fact that they are encrusted with rubies and diamonds. At the other end of the spectrum, you are able to get fabulous Asian footwear for both men and women from the likes of Rupali, Bombay Stores, Kadam London and Chaand Bazaar.

These pulchritudinous yet majestic shoes manifest YSL’s famous quote ‘fashion fades, style is eternal’. The style of Asian footwear has undoubtedly moulded itself towards every age it has found itself in and it seems as though this style, be it on ceremonial occasions or otherwise, is not fading anytime soon!

An English and creative writing graduate aspiring to have the style of Johnny Depp and the writing abilities of J K Jerome. Rafi is an enthusiast of fashion, food, culture and anything else which crosses his path! His motto: "Knowledge speaks, but wisdom listens."
Five Top Online Shops for Women
London Fashion Week September 2012