Taapsee Pannu recently spoke out about Kangana Ranaut’s ‘irrelevance’ to her personal life. Now, Ranaut has hit back.

“I don’t mind B grade actors using my name"

Kangana Ranaut has hit back at fellow Bollywood star Taapsee Pannu for calling her “irrelevant”.

In a recent interview, Taapsee Pannu said that she does not miss Kangana Ranaut’s absence on Twitter.

She also said that Kangana is irrelevant to her personal life.

“I didn’t miss her or want her, also before. She’s too irrelevant to me, in my personal life.

“She’s an actor, she’s a colleague in that respect. But more than that, she doesn’t hold any relevance in my life.”

Kangana Ranaut could not use Twitter to respond due to her account suspension. However, she still took to social media to react to Pannu’s comments.

Taking to her Instagram handle on Wednesday, June 30, 2021, Kangana claimed that Taapsee Pannu asks producers for films that she had left.

As well as this, Kangana went on to refer to Taapsee Pannu as a “B grade actor”. 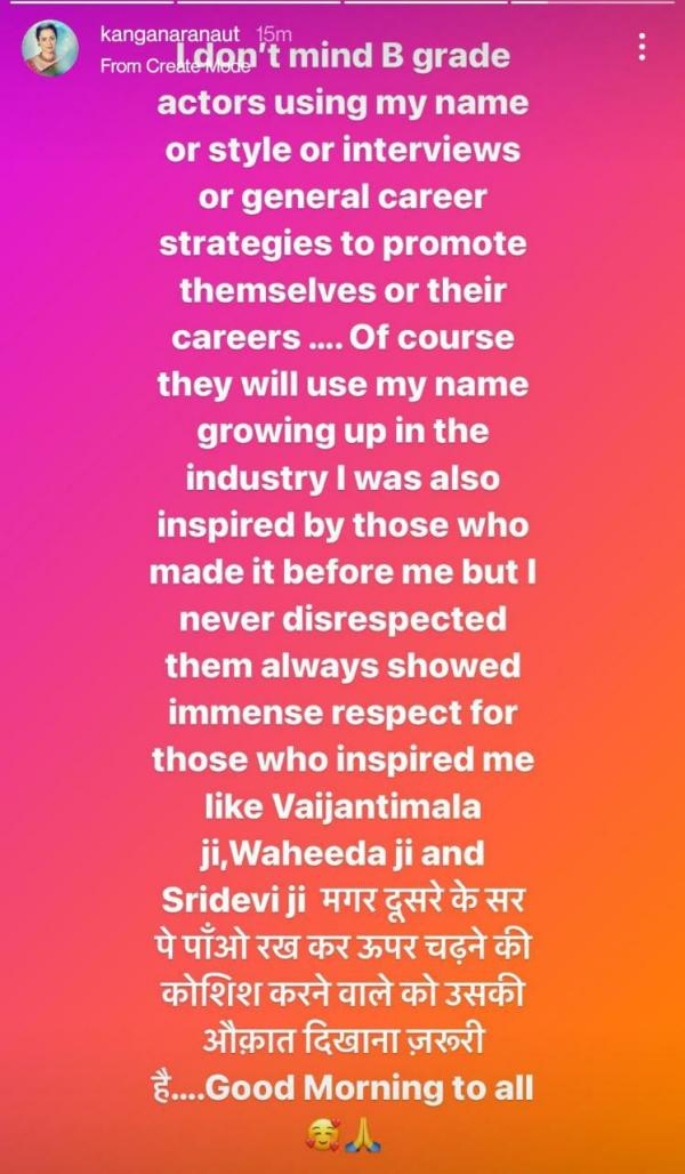 Posting to her Instagram story again, the actress said:

“Of course they will use my name growing up in the industry I was also inspired by those who made it before me but I never disrespected them.

“Always showed immense respect for those who inspired me like Vaijantimala ji, Waheeda ji and Sridevi ji.”

“It is necessary to show his position to the one who tries to climb up by putting his feet on the other’s head.… Good Morning to all.”

On the work front, Kangana Ranaut has Thalaivi and Tejas in the pipeline. She is also currently shooting for Dhaakad with Arjun Rampal.

Most recently, Kangana announced that she will be directing a film based on the life of former Prime Minister Indira Gandhi.

The film, titled Emergency, is a political drama rather than a biopic and will be Kangana Ranaut’s second directorial project.

“Pleased to wear director’s hat again, after working on Emergency for more than a year I finally figured no one can direct it better than me.

“Collaborating with fabulous writer Ritesh Shah, even if it means sacrificing on various acting assignments I am determined to do it, my excitement is high.

“This is going to be a tremendous journey, my leap to another league #Emergency #Indira.”