Instead of a happy ending to an Indian wedding, guests erupted into a violent fight with hotel staff due to the poor quality of food served.

When it comes to an Indian wedding, one of the biggest highlights of the day is the food. It is a major talking point of the day and even after.

However, an Indian wedding reception held at the Piccadilly Hotel, Janakpuri, in New Delhi, turned extremely sour after the wedding guests were not at all happy with the quality of the food served at the wedding.

A huge fight and brawl erupted with guests beating up hotel staff and getting violent with serving utensils.

After the food was served, the dissatisfaction of the quality and its taste began to simmer.

Where a complaint to the hotel management would’ve possibly saved the day, guests decided to take justice into their own hands to demonstrate their unhappiness with the food.

A ‘shocking’ attack on the hotel staff commenced with some of the guests assaulting waiters and then the violence moved towards the kitchen staff.

Cultery, steel trays and utensils were thrown and used to hit some of the staff.

Mayhem resulted, with innocent people at the wedding walking around in a frenzy trying to work out what was taking place.

One guest even says:

Furniture laid out for the reception in the hotel was destroyed as part of the ruckus by the guests.

The Indian wedding ceremony taking place at the hotel was of a bride from Vikaspuri and the groom from Uttam Nagar.

Reports say that guests from both the groom and bride’s side joined in the violent uproar regarding the quality and standard of the food served which was ‘clearly not acceptable’.

This video shows some of the violence and the brawl of the incident: 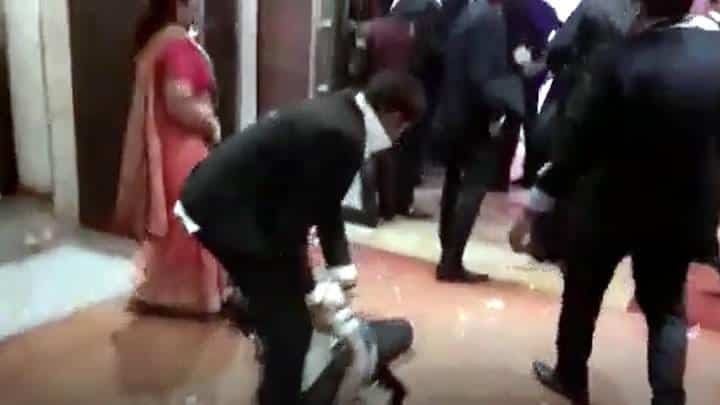 Staff can be seen on the floor after being beaten and guests smashing plates and trays.

According to reports, many of the staff and guests were seriously injured as a result of the fight at this wedding.

New Delhi police were called to the aftermath of the violent scenes at the hotel.

Guests involved in the fracas were arrested and charged for disturbing the public peace, assault of the hotel staff and for damaging hotel property.

Amit enjoys creative challenges and uses writing as a tool for revelation. He has major interest in news, current affairs, trends and cinema. He likes the quote: "Nothing in fine print is ever good news."
Indian Wedding Presents including Gold Stolen on Big Day
Couple Abducted and Woman Raped by 12 Men in Punjab