Videos of a horrific and vicious fight at an Indian wedding in the UK have emerged on social media. Showing a happy day ruined by very violent scenes.

A frantic DJ is heard telling people to stop and move away.

Shocking video clips are doing their rounds on social media of a horrific fight that erupted at an Indian wedding reception taking place at the Ramada Hotel in Wolverhampton, UK.

The wedding took place on 12th October 2019 and members of the Bhatra community are seen in the videos of the reception.

Whilst the reasons for the fight and brawl are not released, police were called to the venue in order to restore law and order.

The fighting in one video shows tremendous amounts of violence with screams being heard from the guests at the reception.

There are punches being thrown between guests with people trying to stop them and other guests being involved, grabbing and pulling others.

Many people were hurt with evidence of blood on some of the men seen in the video. Therefore, the nature of violence was extreme.

One man is thrown to the floor and others come to his aid, whilst another pulls back his hair which has come undone after his turban was knocked off during an altercation.

Here is a clip posted on Facebook of the horrific fight at the wedding. Warning of graphic violence and swearing.

The wedding has a mixture of guests from the South Asian, caucasian and black community. Who are all seen involved in the fighting.

A woman is seen trying to lead one injured man away with blood-stained clothes. While others continue to brawl. 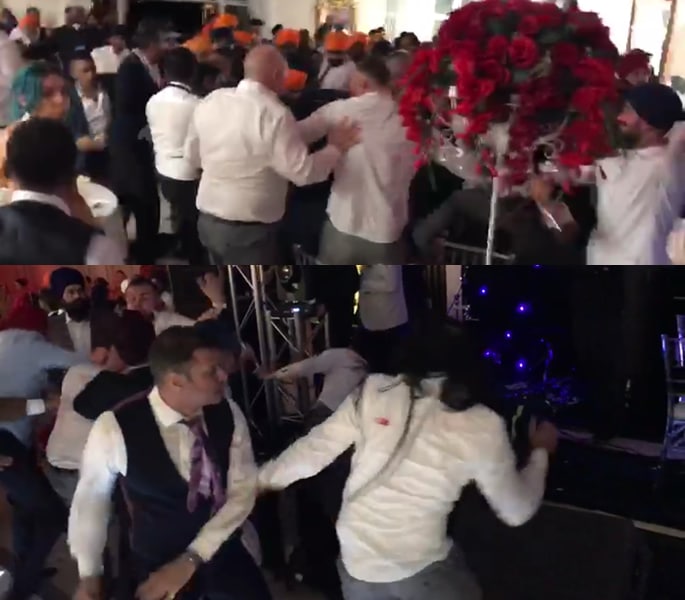 A frantic DJ is heard telling people to stop and move away.

The fight seems to have nothing to do with the catering staff, DJ or the venue but seems to have been sparked amongst the guests. It is not clear if it is the groom or bride’s side.

Asian weddings are known for their grandeur and lavish celebrations. This video also shows the ugly side of a wedding reception which has gone very sour and resulted in a very serious fight amongst the guests.

Many people will also blame things like alcohol which does flow at Punjabi weddings and can contribute to such tragic scenes.

There is no doubt that there was definitely no intention of the two families to have their special day ruined by such behaviour but the fight will leave a very traumatic and sad memory for an occasion which is supposed to be a happy one.

With children and women present at the wedding, the fight amongst the men poses many questions including their erratic and violent behaviour and their irresponsibility.

Such fights and brawls at weddings are a bad reflection on British Indian society and need to be eradicated.

Amit enjoys creative challenges and uses writing as a tool for revelation. He has major interest in news, current affairs, trends and cinema. He likes the quote: "Nothing in fine print is ever good news."
Indian Magistrate marries Woman who he ‘Sexually Exploited’
‘Financial Concerns’ raised at UK-based Penny Appeal charity