Janhvi Kapoor shared glimpses of a party she attended with her rumoured ex-boyfriend Akshat Rajan and sister Khushi Kapoor.

“Happy birthday to the world’s best human I love you.”

Janhvi took to Instagram on September 18, 2021, and posted multiple photos from the night.

The photos were shared with her 12.9 million Instagram followers.

In one photo, Janhvi embraces her rumoured ex-boyfriend Akshat Rajan.

Akshat showers Janhvi with hugs and kisses as they pose for the camera.

In another, the pair are joined by Khushi whilst Janhvi poses with a pout and Akshat points towards the camera. 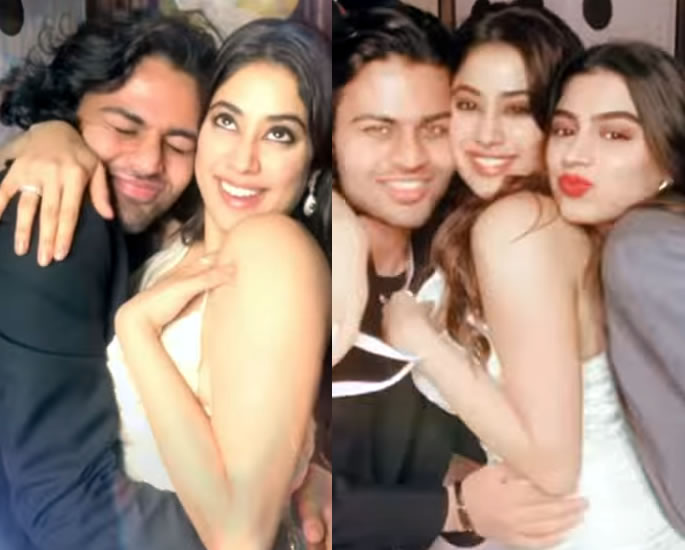 Boney Kapoor’s daughters are one of the most popular and stylish sister duos in Bollywood right now.

Both sisters posed beside a white and gold balloon arrangement.

On September 15, 2021, Janhvi shared a post on her Instagram story to wish Aksant on his 23rd birthday.

“Happy birthday to the world’s best human I love you.”

In the picture, Janhvi was seen leaning on Akshat’s shoulder who posed for the camera.

The picture once again sparked the rumours of their relationship.

“Happy birthday to the best @akshatrajan.”

Reports of Janhvi’s love affair with Akshat started before the release of Dhadak in 2018.

However, the rumours faded away after the actress was linked to Ishaan Khatter.

The pair previously stated that they are simply “childhood best friends”.

“The rumour mongers have also said that I am dating my childhood best friend called Akshat, who’s so scared to hang out with me now because he is too scared that we will be papped together.”

The duo previously took a trip to Lonavela in 2020 and shared plenty of photos and videos on social media.

Janvhi was last seen in Roohi, in which she played a possessed bride.

She also recently wrapped up the filming on Good Luck Jerry earlier this year.

The actress will next be seen in Dostana 2 and Takht.

Ravinder is currently studying BA Hons in Journalism. She has a strong passion for all things fashion, beauty, and lifestyle. She also likes to watch films, read books and travel.
Why #BoycottShahRukhKhan is Trending
Divya Agarwal announced Bigg Boss OTT Winner