A 29-year-old Indian man was brutally beaten public in Buttar, Punjab, by a girl’s family after he was accused of harassing her.

the Indian man pleaded with them to stop beating him.

A 29-year-old Indian man from Buttar, Punjab, was kidnapped and beaten by members of a girl’s family after he was accused of harassing her.

The man was then left outside his house. A video of the incident circulated and a woman can be heard asking him his reason for talking to the girl.

The man was identified as Gurjeet Singh.

Gurjeet had been abducted by two men before he was beaten with sticks. He was later dumped outside his house. They believed that he was harassing a young woman in their family after the victim constantly called her.

Gurjeet was taken to a hospital where he later told police officers what had happened.

Based on his statement, a case was registered against seven family members, including a woman.

In the video, the woman is seen slapping the victim while also asking him why is he harassing her relative.

When he responded, saying that he likes her, the rest of the family members became even more enraged and beat him again.

As he got assaulted, the Indian man pleaded with them to stop beating him. He also said that he would stop contacting the girl. 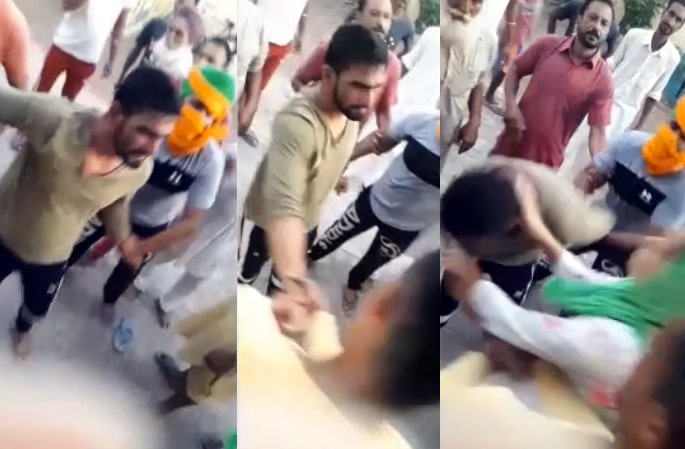 In his complaint, Gurjeet told the police that he had been travelling somewhere on his motorbike on September 24, 2019, when the attack happened.

He soon noticed that two young men began chasing after him. Gurjeet travelled to Dharamshala, Himachal Pradesh and tried to seek refuge at a nearby home.

However, he was caught by the men and taken back to Buttar. Gurjeet was taken to a schoolyard there where he was kicked and punched.

The other family members arrived and questioned him as to why he was harassing the girl. They then beat him with sticks for a couple of hours.

Gurjeet was later dumped outside his house. His family found him injured and he was taken to the hospital.

After receiving treatment and recovering, police took his statements and a case was registered.

In relation to the incident, ASI Gurcharan Singh explained that based on Gurjeet’s statement, a case has been registered against seven people.

Four were identified as Mandeep Singh, Mani, Indrajit Kaur and Kaku Singh. Three others have not been identified but all seven are from the same family.

They have been charged with abduction and assault. Police officers are conducting raids in order to arrest the suspects.

Dhiren is a journalism graduate with a passion for gaming, watching films and sports. He also enjoys cooking from time to time. His motto is to “Live life one day at a time.”
Thug told Victims ‘It’s time to die’ in Vicious Hammer Attack
Indian Wife evicted by Husband for Having Five Daughters