In a tragic case, an Indian girl died and 33 other people have fallen sick after eating chicken at a wedding in Jharkhand.

She had been at the wedding when she fell ill.

In what is believed to be a case of mass food poisoning, an Indian girl died after eating chicken at a wedding.

As well as one fatality, 33 other people are reported to be sick, including women and children.

The incident happened in the village of Tillingidiri, Jharkhand.

It was reported that after the wedding meal, guests from various villages began to feel ill.

While the wedding happened on Friday, March 6, 2020, the matter did not come to light until March 7.

Paramedics from CHC Manoharpur Hospital were informed about the mass food poisoning and arrived at the village to take the sick people to hospital.

Doctors did not expect such a large number of people to be brought in at the same time. As a result, beds were set up on the floor for some of the patients. 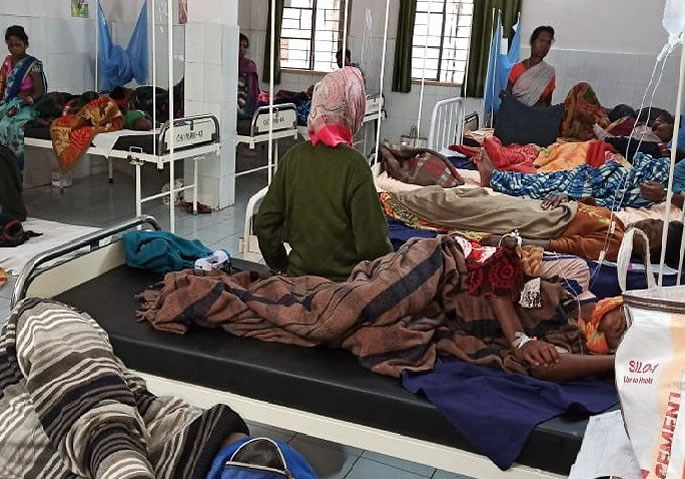 The Indian girl was identified as 16-year-old Susana. She had been at the wedding when she fell ill.

However, on the way to the hospital, she sadly died. Susana was a student at Jharkhand Residential School in Anandpur.

After hearing about the food poisoning incident, Aditya Ranjan, DDC of the district, has provided necessary instructions to the health department.

One of the guests, named Budhni, explained that she attended the wedding in Tillingidiri. She said that many people from nearby villages were also there.

Budhni said that the wedding meal took place shortly after the marriage ceremony.

During the ceremony, guests ate food such as boiled chicken and pork.

After the wedding, the guests returned to their homes. But during the evening of March 7, many guests began complaining of diarrhoea and vomiting.

Some people even fainted. News of the incident caused panic in the villages.

Upon hearing the news, the head of Jharbera Panchayat, Dilbar Khakha took action by calling the paramedics.

Several ambulances arrived at the scene at around 11 pm to take the sick people to hospital.

Susana died the day before, however, there was no suspicion of mass food poisoning as the other guests did not show any symptoms until the next day.

While 33 guests were hospitalised, Budhni was not one of them. She stated that she never ate the chicken during the wedding and suggested that the chicken was to blame as all the sick people had eaten it.

The ill guests remain in hospital recovering. They range from four-years-old to 60-years-old.

Dhiren is a journalism graduate with a passion for gaming, watching films and sports. He also enjoys cooking from time to time. His motto is to “Live life one day at a time.”
Has ‘Aurat March’ made a Difference for Pakistani Women?
Indian Teachers suspended for Showing Obscene Videos to Girls