Has ‘Aurat March’ made a Difference for Pakistani Women?

The Aurat March coincides with International Women’s Day, however, has the rally actually made a difference for Pakistani women?

"these handful of people are busy in misleading the entire nation"

The Aurat March is an annual event which is held across Pakistan. It is a women’s march which coincides with International Women’s Day on March 8.

It is an event which has been held every year since 2018.

Women take to the streets to voice their opinions and to hold banners. Many of the subjects include the fact that they do not feel safe in public places due to harassment.

Aurat March came to fruition when a few women decided to mobilise their networks and gather in a Karachi park to call an end to violence and harassment.

It soon became a wider movement where participants called for better laws to protect women and enforcement of existing laws, as well as raising awareness and changing attitudes.

Although many women take part, the rally is not without controversy.

Even though the march is designed for women to call an end for violence, they are still subjected to it.

In 2019, participants faced online backlash. Some alleged that they had received death and rape threats afterwards.

An organised march in 2020 has also resulted in controversy across the country. 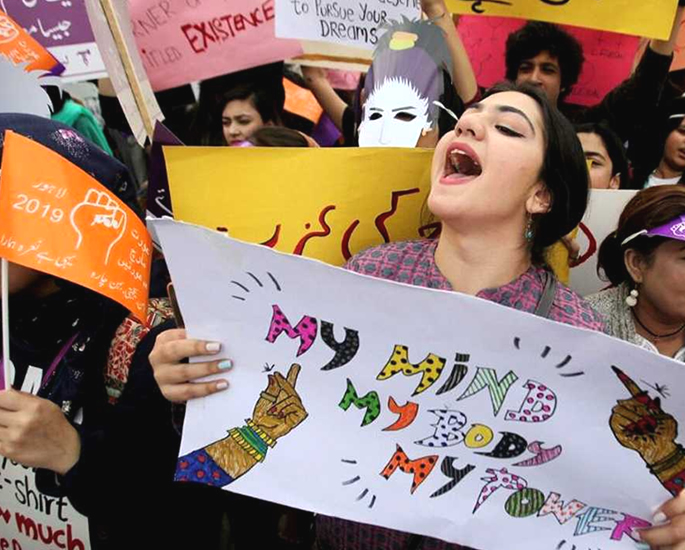 Fuel was added to the fire during a live TV debate between writer Khalil-ur-Rehman Qamar and Marvi Sirmed.

“A handful of women are misleading our daughters in the name of so-called Aurat (women) march.

“By coming out on roads and raising slogans that are not permitted in our culture and religion, values or family does not auger well with women’s rights. What kind of power do they [the marchers] want?

“We have to see who are these handful of people are busy in misleading the entire nation, especially women.”

She argued that the march will cause more harm than good.

“The PTI has proved that it is the latest version of Jamat-e-Islami [country’s mainstream religious party], and is against the women rights.”

He said the Sindh government would provide full security to those involved in the Aurat March. 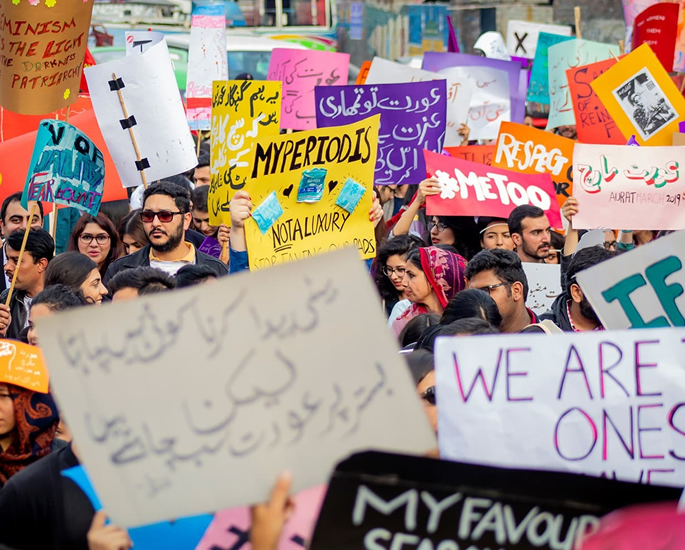 A petition was filed in court seeking a ban on the march but it was dismissed. However, the court asked organisers to exercise their constitutional rights in accordance with the law having regard to conduct that is consistent with the norms of decency.

This comes after some women caused controversy by holding up provocative slogans. In 2019, many women held up banners saying “divorce and happy” and “no uterus no opinion”.

“The slogan has been misunderstood and misinterpreted. Demanding bodily rights as a basic human right, regardless of age.”

“It extended to children as well, and was especially important to think of with regards to the widespread incidents of child sexual abuse and murder, all over the country.”

Another group, Jamat-e-Islami, is organising a rival conference, demanding for a better environment for women at the workplace, transport, health, and education facilities, due right in the family property, and heavy punishment for honour killings, have been put up across the country by the politico-religious party.

In what they’re calling “Women respect day”, the party stated that those holding up banners during rallies do not represent Pakistani women.

Although the Aurat March is supposed to be an event, calling for violence against women to end, some feel that they do not represent women in Pakistan.

Some feel they use the Aurat March to address their own agendas rather than what the march was created for.

It may be an event condemning violence against women but many still fear for their safety.

Some participants during 2020 marches have already been injured. But despite the threat of violence, the fear will not stop women from raising their voices.

Dhiren is a journalism graduate with a passion for gaming, watching films and sports. He also enjoys cooking from time to time. His motto is to “Live life one day at a time.”
UK Man jailed for Pirating & Selling hit Hollywood Movies
Indian Girl dies & 33 Fall Sick after Eating Chicken at Wedding