How Kamala Harris made a Difference to US Elections

Joe Biden won the 2020 US Election along with his running mate Kamala Harris. We look at how she made a difference.

"We have a lot of work ahead of us. Let’s get started.”

On November 7, 2020, Democrat candidate Joe Biden won the race to become the next President of the United States. In addition, his running mate Kamala Harris will become the next Vice President.

The election was the highest turnout since 1900 and one of the most uncertain.

Despite the election ending on November 3, 2020, vote counting continued for days. Amidst all that, they were allegations of ballot fraud by Donald Trump and demands for a recount.

“The work ahead of us will be hard, but I promise you this: I will be a President for all Americans — whether you voted for me or not.”

Mr Biden’s victory will make him the oldest sitting president at the age of 78.

Vice President-elect Kamala Harris will also make history as the first woman to secure the role among other things. Her pivotal role throughout the election campaign helped the Democrats secure the White House, the last to do so was Barack Obama.

We explore Vice President-elect Harris’ role in making a difference in the US Elections as well as her diverse background.

Kamala Devi Harris was born in Oakland, California, and is the daughter of a Jamaican father and Indian mother, both who immigrated to the US. Her sister, Maya, is a lawyer and political analyst.

Maya paid tribute to her sister following the historic moment.

Mommy taught us we could be and do anything. She would be beyond proud today.??? pic.twitter.com/OZEw6MCPCD

During the campaign trail, Harris hardly talked about her thoughts on her racial heritage, however, she frequently described her late mother, Shyamala Gopalan, as her mentor.

Her family is also unique. Her husband Doug Emhoff will become the country’s first ‘second gentleman’.

With her win, Harris will become the first woman and first woman of colour to be elected Vice President. It is a historic moment which will hopefully inspire other people of colour.

Shortly after the race was called, Harris posted on Twitter:

“This election is about so much more than Joe Biden or me.

“It’s about the soul of America and our willingness to fight for it. We have a lot of work ahead of us. Let’s get started.”

However, it was her victory speech that inspired and brought tears of joy to many women and girls watching.

Kamala Harris paid tribute to women across the country and through history who paved the way the moment.

Specifically, she honoured the contributions of Black women who fought for equality and civil rights, leaders who are “too often overlooked, but so often prove that they are the backbone of our democracy”. 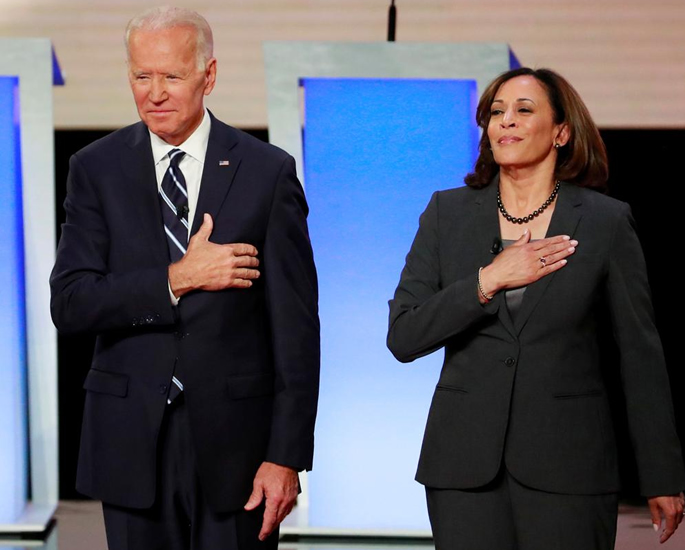 “I could not be more proud of Kamala Harris and all that she represents.”

She hoped that Harris’ victory would inspire more young people.

Senator Cory Booker said: “I feel like our ancestors are rejoicing.

“For the first time, a Black and South Asian woman has been elected Vice President of the United States. My sister has made history and blazed a trail for future generations to follow.”

Crying and holding my daughter, “look baby, she looks like us.” pic.twitter.com/Gy4MAPoNjy

This milestone marks the extraordinary arc of a political career that has broken racial and gender barriers at nearly every corner.

Throughout the election campaign, Kamala Harris had a huge role in gaining supporters, particularly among the South Asian community in the United States.

She is someone who they can relate to and her background is similar to theirs, given that over 25% of American adults are immigrants or children of immigrants.

“Her background is something that we often celebrate about America, that we are this immigrant melting pot, we are a place where anybody can succeed who can come to America and find opportunity, and her family did that.”

Kamala Harris’ gained a lot of support from Indian-Americans, especially as they are the second-largest immigrant group in the US.

However, she was involved in an incident where she denied a Sikh prison officer’s right to practice his faith as he refused to shave his facial hair.

Following her victory, the Vice President-elect has vowed to “root out systemic racism in our justice system and society”, something which was welcomed by ethnic minority citizens.

“While I may be the first woman in this office, I will not be the last—because every little girl watching tonight sees that this is a country of possibilities.”

I hope every little girl watching tonight sees that this is a country of possibilities. pic.twitter.com/E4GYfr2QoO

It drew huge cheers from the crowd and it hinted that Harris may run for President in the future.

If she were to become President, she would be the first female President and the second mixed-race President after Barack Obama.

Kamala Harris’ victory is a landmark for all ethnic minorities and women in the country. Hopefully, it will provide positive change for the country.

Dhiren is a journalism graduate with a passion for gaming, watching films and sports. He also enjoys cooking from time to time. His motto is to “Live life one day at a time.”
Man stabbed Girlfriend in Head after threat to “Take her Life”
Leicester Man jailed for Slitting Boy’s Throat in Random Attack