An Indian boy stole a wedding bag that was filled with cash and jewellery. It was revealed that the contents of the bag were worth Rs. 10 Lakh (£10,800).

An Indian boy was caught on camera stealing a bag containing Rs. 10 Lakh (£10,800) worth of jewellery and cash.

The incident happened at a wedding ceremony in the city of Sonipat, Haryana.

CCTV footage spotted the boy making off with the bag. A case has been registered and police officers are looking for the child thief.

In the footage, the boy is seen sitting on the floor while other guests walk around, not noticing what he is doing.

The boy, who is believed to have been one of the guests, then spots two bags on the floor.

As the guests continue to pace around the venue, he moves one bag to the side and places the other close by him after discovering that it is filled with valuables.

He continues to sit, looking around to ensure that any close-by guests are not facing his direction.

As he looks around, the Indian boy gets into a crouched position in order to make for a quicker escape. 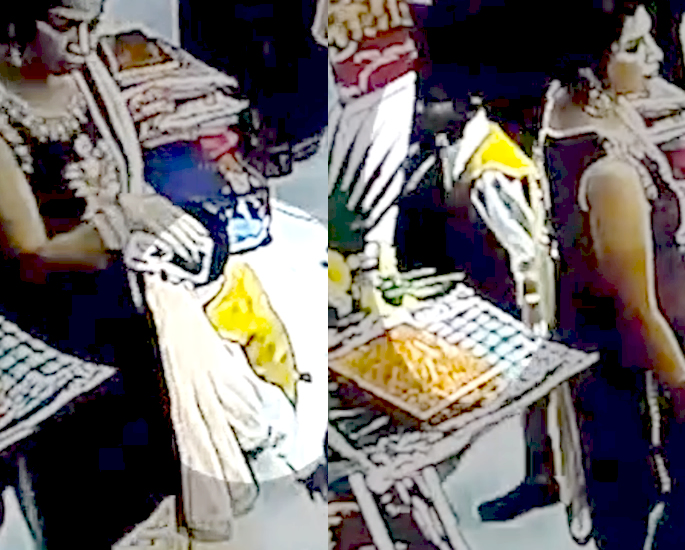 After patiently waiting, the boy gets up and grabs the bag, quickly walking out of the ceremony.

However, his actions were spotted on CCTV and after Jagdish Sharma noticed that the bag was missing, he filed a complaint.

He told officers that it was his daughter’s wedding ceremony and that it took place on the night of November 10, 2019.

But after the boy looked through it and realised it contained valuables, he walked out with it.

While the CCTV footage does not clearly show the boy’s face, officers pointed out that it is likely that other guests know him as he had attended the event.

The boy had been wearing yellow-coloured trousers and waistcoat during the wedding ceremony.

It has not been confirmed what the valuables were for but police believe it was a gift for the newlywed couple.

Investigating officer Surjit Singh has explained that the CCTV footage is being looked at in a bid to identify the boy.

He said that officers are searching for the bag and also stated that they plan to arrest the boy once they identify him and locate his whereabouts.

Dhiren is a journalism graduate with a passion for gaming, watching films and sports. He also enjoys cooking from time to time. His motto is to “Live life one day at a time.”
Indian Brother kidnapped Child for his Sister and Husband
Bouncer jailed for Punching Clubgoer Unconscious