Ila Arun in The House of Bilquis Bibi

Ila Arun is a well known voice in Bollywood and has appeared in some hit movies. Now she turns to theatre and performs the leading role of ‘Bibi’ in ‘The House of Bilquis Bibi’ presented by the Tamasha theatre company in the UK.

"I am very critical of my own work"

Applause and excitement filled the theatre as ‘The House of Bilquis Bibi’ took to the stage. A play by Sudha Bhuchar of the British Asian Tamasha Theatre company which was adapted from ‘The House of Bernada Alba’ by by Federico García Lorca, and directed by Tamasha’s Kristine Landon-Smith.

Ila Arun the Bollywood actress and singer was selected to play the role of ‘Bibi’ in the play. The first play in English for the actress. Ila is well known for her role in the Bollywood epic Jodha Akbar and for her unique rustic voice in songs like ‘Choli Ke Peeche Kiya Hai’ and  ‘Ringa Ringa’ from Slumdog Millionaire.

The play opens with sentimental background music, introducing the loss of the Bilqui’s husband who died in the bomb blasts. The audience witnesses the commotion of Bilquis Bibi’s family. Ila Arun (Bilquis Bibi) plays a strict Queen of Sheba, mothering five daughters. Aida is the eldest daughter who is a strong worshipper. Sumayyah; one of the youngest daughters is the first martyr in Islam. Aroosa is the next bride to be, and Amana is the faithful younger daughter. The daughter, Fida, has been banished for her deeds.

Bilquis’ daughters are caged within the boundaries of their house. During the hardships of this family, Sumayyah undergoes heartfelt pain. Her sister looks after her, but Sumayyah’s heartfelt pain goes beyond medication and therefore refuses to take it. Her built up anger comes out in great frustration. Since the death of Bilquis’ husband, strict rules have been set. No joking around. No colourful clothing. No stepping out into the garden. No mixing with the boys.

Bilquis agrees for eldest girl Abida to become engaged to her nephew Pappo. He brings with him the hope of love and the American dream.

Bilquis turns a blind eye to the illicit nightly visits Pappo pays to his fiancée’s balcony. But happens when she realises that more than one daughter is staying awake for him, and also Pappo’s love is only for inheritence? The story shows how Bilquis reacts to the secrets, betrayal and deceit. 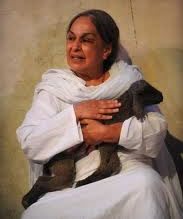 The play features an all-female cast of nine with performances from Youkti Patel as Aroosa, Mariam Haque as Sumayyah, Vineeta Rishi as Fida, Shalini Peiris as Amana, Rina Fatania as Bushra, Ghizala Avan as Abida and Indira Joshi (The Kumars at No. 42) as Bilquis’s senile mother, Mehroonisa.

Interpreted from of Federico Garcia Lorca’s play, ‘The House of Bernarda Alba’ the Tamasha play draws cultural similarities. Lorca’s play was written in 1936, set in the 1930’s Spanish period where small town families laid strict rules. This play gets as close to the reality of the 1930’s as today. Lorca brought the reality of a neighbouring family to life. This play takes the Spanish culture in the 1930’s and transforms it to the culture of a Punjabi town called Jhang in modern-day Pakistan.

This play features Ila Arun as both an actress and a singer. She was born in Rajistan in India. She graduated at Maharani Girls College. And she is also a composer, writer, film and TV producer. Ila loves acting and singing and says, “I am singing while I’m acting and I’m acting while I sing.” When we asked her what advice she would give to upcoming singers and actors, she said,

“Don’t rush for stardom, it takes a lot of patience.”

We caught up with Ila Arun prior to her performance in the play and asked her more about her career and role in the play. Watch our exclusive video interview with the Bollywood actress and singer.

Ila has tremendously enjoyed her role as Bilquis Bibi and says, “I lose myself into the character role of Bilquis Bibi.” 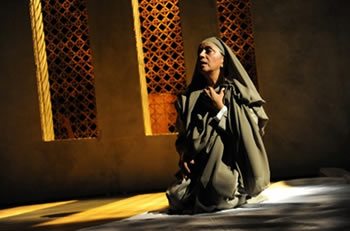 One of Ila Arun’s most prolific roles in Bollwood was as Maham Anga in Jodha Akbar. A movie that centres around the romance between a Muslim Mughal Emperor and a Hindu Rajput princess, starring Hrithik Roshan and Aishwarya Rai. The film shows two different religions and cultures coming together. The film was an Academy Award Winner; also winning seven Star Screen Awards and five Filmfare Awards.

Ila excels in her work although she is very critical. She says, “I am very critical of my own work, I always feel I can do better.”

‘The House of Bilquis Bibi’ brings the awareness of the Asian society to the British society. The play is touring the UK until early October 2010 – tour dates. Ila Arun has been going from strength to strength in her career and no doubt she will be performing in more UK plays in the future.